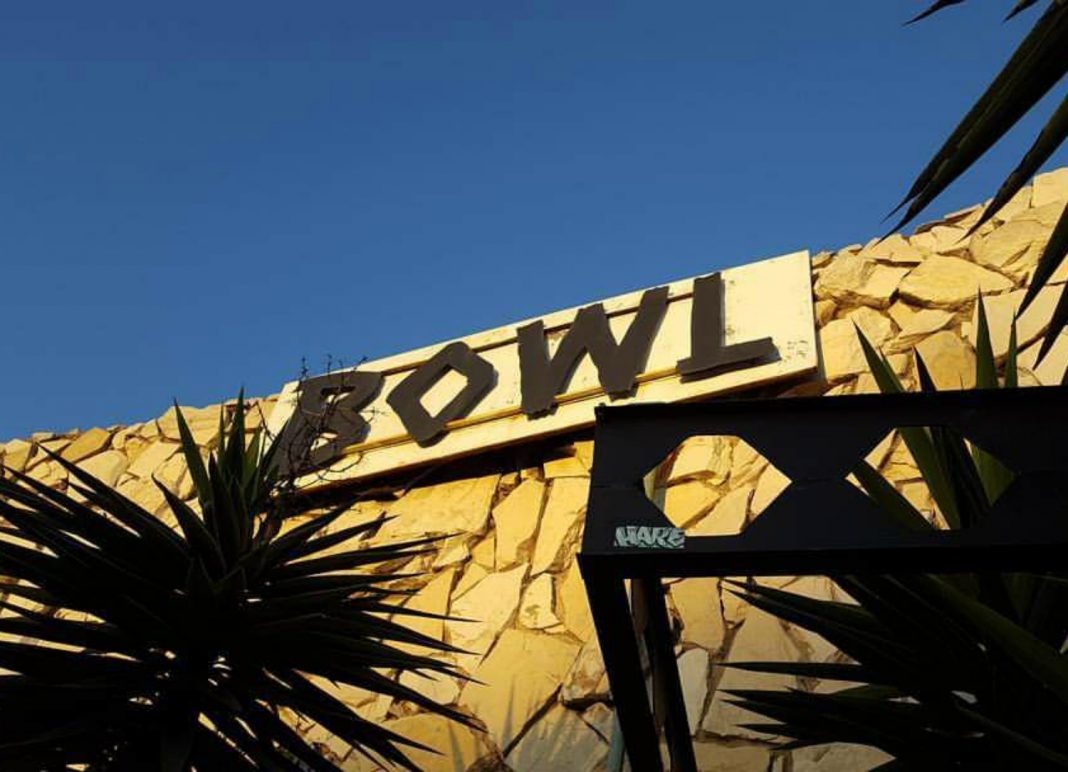 One of the last great Southern California bowling centers of the 1950s is scheduled to close soon, and plans are in the works for a supermarket and a Chick-fil-A to take its place. Palos Verdes Bowl opened in 1958 at the height of the bowling boom and the googie-style building features the webbed I beams, flagstone walls, spiky yuccas, and Las Vegas-scaled neon sign that defined the era.

When automatic pinsetters were introduced a few years earlier, the industry pivoted to cater to baby boomer families, adding amenities like coffee shops, banquet rooms, lounges with live entertainment, and a supervised playroom where children could play while their parents bowled. “We went bowling every weekend,” remembers preservationist Adriene Biondo, whose family rolled strikes at every new center that opened around L.A. in the 1960s. “They had games and gunnysack races. They even made sure we had a nap and orange juice when we woke up.” Biondo is working with the Friends of Palos Verdes Bowl to find a solution that would save the endangered center.

It’s still fun to go bowling. The ancient Egyptians rolled round rocks down limestone lanes, and today you can do the same while sipping a $250 Brut served with caviar and Pringles. The sport has gone upscale, with deluxe venues like Bowlmor and Lucky Strike bringing in a whole new crowd in two-tone shoes. Many of the remaining vintage centers have had so many makeovers that their original look is long gone, but Palos Verdes still features the original nautical-themed Cove cocktail lounge with blue-green slag glass embedded in the locally quarried Palos Verdes stone walls and that massive sail-shaped sign topped with “an atomic gyroscope,” as Biondo calls it, still stands at the entrance.

Some cities have worked to retain character-defining features from this nearly extinct species of architecture as the buildings are transformed for new uses. Friendly Hills Lanes in Whittier is now a BevMo and an Aldi, but you still drive under the boomerang-shaped entry and pass flagstone walls. Its massive “BOWL” letters outside are identical, but changed to read, “SHOP.” Mission Hills Bowl still flaunts its dynamic shapes while posing as a Ross Dress for Less, and Covina Bowl will maintain its Egyptian-Modern exterior as its parking lot is soon filled with townhomes. The owners of each building achieved their goal while helping to preserve a significant piece of mid-century architecture and cultural heritage.

These adaptive reuse projects can happen when there is political will and that usually starts with a preservation ordinance. The city of Torrance recently adopted one, but has not yet landmarked any historic buildings. Palos Verdes Bowl exemplifies the postwar building boom that transformed the South Bay, and all of Los Angeles, and Biondo believes it should be on the list. “We are hoping this is a candidate for landmarking,” she says.

Biondo is hoping to work with the city and owner George Brandt, who has operated the center for decades. Brandt plans to get out of the business of bowling, and into the business of being a landlord. Perhaps there’s a way to do both.