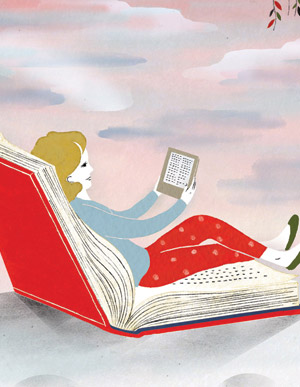 My desire to be a writer was born among the stacks of my local public library, a low-slung building that still stands on the southeast corner of Montana Avenue and 17th Street in Santa Monica and will be celebrating its 50th anniversary this year. I would ride my bike there at all hours, at dusk after school or on a Saturday morning, and graze eagerly through the offerings. I’d finally make my selection and if I couldn’t wait for the checkout and ride home, would sit down in one of the miniature hard-backed chairs or right on the floor and begin Kon-Tiki or Misty of Chincoteague or a Nancy Drew mystery.

I still recall the exhilaration of being tucked in there, surrounded by all those books with their beckoning multicolored spines, and thinking: One day, when I am grown up, I will add to their number. I will write my own novel or tale of adventure. Other preteens, reading the same stories as I, were no doubt fostering different, more adventurous dreams of sailing the oceans or solving mysteries. But I was well acquainted with my innate timidity, balanced early by a rather adamant articulateness. My courage and ambition would be directed toward covering paper with words (by hand, yes, even though there were typewriters, but they didn’t enter my fantasies) so that I could take my place on the shelves around me.

The drive wasn’t just to be a writer. That was uppermost, yet there was also a physical longing to hold in my hands and see on display a material thing, bound and beautiful, that carried my name. When I finally joined the author ranks and the copy of my first book arrived in the mail, I was dazzled, pawing it and sniffing it as an animal might take the measure of its newborn. I savored the thickness of the paper, the title page, the type font. It felt so tangible, so permanent, my own creative stab at immortality. This would live; this would last. I have felt similar excitement—though not of the same intensity—upon handling a new book by someone else, usually a work of fiction (my weakness) by an author I admire.

No more. That sensual act is becoming passé (as are, for that matter, bookstores and libraries). We are fast turning into a world of digital texts. They don’t come between covers; they zip onto screens with the press of a button. They don’t smell. You can’t stroke them. Literature flies out of cyberspace—a kind of technical magic, I admit, but hardly the voluptuous experience of yore. I had been resistant. How could I not be? I refused to even consider the burgeoning Kindle, the subject of a screed by writer Nicholson Baker who, in a New Yorker cri de coeur last summer, detailed what he didn’t like about it, including the color of the screen, how books are reduced to a certain visual uniformity, the many titles not offered. I nodded along in sanctimonious agreement. No, no, Amazon, take your cool little gizmo with its eerie instantaneity and leave me be. I want the foreplay, the pacing through the stacks, the waiting for some book to call out to me, to catch my eye and rouse my imagination. I pitied my friends who had embraced the new e-readers, writing them off as traitors to all that I valued.

Then I fell, hard and fast. One late night, already abed, I realized I needed a book to do research for a piece. I was on deadline and had forgotten about it. I could try my local independent bookstore first thing in the morning or order from Amazon, but that would take at least 24 hours. I remembered that lying on a kitchen chair was my husband’s Kindle, a birthday present from friends five months before. I had barely looked at it, keeping a derisive distance, even though my husband had made a point of demonstrating it to me. I jumped up and went to get it. It was so slim, so ridiculously small. Could it possibly deliver what I was seeking? I pulled out the instruction manual, mashed a few buttons, ordered the title, and waited maybe 30 seconds before navigating back to the home page. There it was. I was horrified by my gratitude because I knew what it meant: I was done for; I had crossed the divide. In that moment I had betrayed my values, my library, every bookstore I had ever loved. I was a Kindle slut with a taste for more.

That night, after browsing through my first purchase—and having no quarrel with the greenish-gray screen—I felt that adrenaline rush one gets when acting vaguely wicked and ordered a collection of short stories I had coveted. Voilà. It was on my screen in minutes, and I was immersed, pushing the next-page tab practically before finishing the sentence at the bottom. After poring through three amazing tales, illusive and intricate and somewhat dark (OK, by Alice Munro), I realized my high was waning and I began looking for another hit. Back to the menu, back to the Kindle Store, and within an oh-so-brief period of time, I was noodling along in a novel I had wanted to read. I added up the total: $9.99 per purchase. I had spent $29.97, roughly the cost of one retro hardcover. This was awesome. I was on the way to having my own cyberstack of those stories. I could take them anywhere. They need never leave my side, those words I had thrilled to my entire life. I could also make them bigger, more readable—no small feat for anyone with aging eyes, a reason why baby boomers have been quick to adopt e-reading.

Days went by as I settled in, prone or over a meal, with what was now my Kindle, threatening my husband if he tried to use it. I was in thrall; it was an antiseptic crush to be sure—the object of my affection was rather flat and uncozy but powerful. Along came the rollout of the iPad, and I began to feel an adulterous itch. Oh my, here was a slightly larger surface on which to view the whole front page of The New York Times in vivid color. The print would be sharper. There would be a zillion apps. I could see videos and send e-mails and turn the page with the swipe of a finger—a teasing bit of the old tactility. A lust began to take hold. I felt guilty but acquisitive. This device could do almost everything. If it could just make phone calls, well then, I wouldn’t need any other gadget.

Finally reason prevailed—or sorrow or fear or all of the above. Perhaps I would not again have the singular shiver of pleasure that comes from holding a new book with my name on it. There would be no permanent bound copy, just words floating through the ether. I felt an anticipatory pang of loss. There was also the punishing financial angle. How were my colleagues and I to make a living? Many of us were struggling with newspapers and magazines shrinking and disappearing and the book business in free fall. The Apple folks agreed to price their books from $12.99 to $14.99, with the revenues split three ways: Amazon would take 30 percent as an agent fee, and the publisher and author would share the remaining 70 percent. The math stank. So did the reality.

This has been an ongoing source of terror for years now. With the communications revolution in full swing, the business we are in is morphing in ways expected and unexpected. Not that the current practices have been working. Concerned for their own survival, publishing houses have been increasingly wary of supporting all but the megastars. No question, it is harder to get anything into print. So here comes this fancy delivery system that is making an end run around the traditional structures. Books will go straight to digital, no felled trees (good), no haggling over the cover art (sad, as it was a process I always loved). How much editing will take place? Less, to be sure. Now anyone can self-publish, and the idea of what it means to be a professional writer is changing.

On bad days my Kindle resembles an intrusive alien, and the crammed bookshelves in my office send me into a swoon of nostalgia that can take my breath away. I retrieve The Great Gatsby, a novel that I’ve read every year on my birthday and thus is appropriately tattered, or Federico García Lorca’s Collected Poems, and their presence reminds me of the biggest pleasure of my life, what makes the days bearable—the act of reading—and concomitantly, the act of writing. Somehow seeing words on that screen has yet to kick my heart in a similar manner. I realize that with the Kindle I tend to speed, flit hard, hop quickly from page to page and text to text, treating literature like a blog. I surf and romp. I don’t muse about or linger over a sentence. I just inhale, grabbing onto nuggets here and there. My concentration has contracted due to years of Web use—hurling out glib opinions for this or that site and communicating exclusively via e-mail. I haven’t written a proper letter in years, save for notes of condolence. With those I still do by hand I recognize an instance when the sentiment needs to be true and deep. But in general I have become a scan artist, brain and eyes and texting thumbs moving furiously. I am becoming, I’m afraid, a more superficial writer and a more superficial reader.

So how do I reconcile the two parts of my soul? I have no wish to be a Luddite or a curmudgeon. I am also a pragmatist. I try to celebrate the split-second accessibility of so much information and the fact that as the days grow warmer, I can lounge outside and read without a messy rattle of newspapers and a tottering stack of paperbacks. I no longer worry about smudging the print with sunscreen or—I don’t know—guacamole. I can, new iPad in hand (yes, I will not be able to resist), be a chaise potato and have with me just about whatever I want, from magazines to mysteries to Kon-Tiki. Oh, my library, my sweet library. Can you forgive me my treachery, my duplicity, my forsaking you for something hipper and sleeker? I wince when I pass you, feeling contrite and cheap and quite surprised at the suddenness with which a suitor stole, if not my heart—not that—at least my attention.