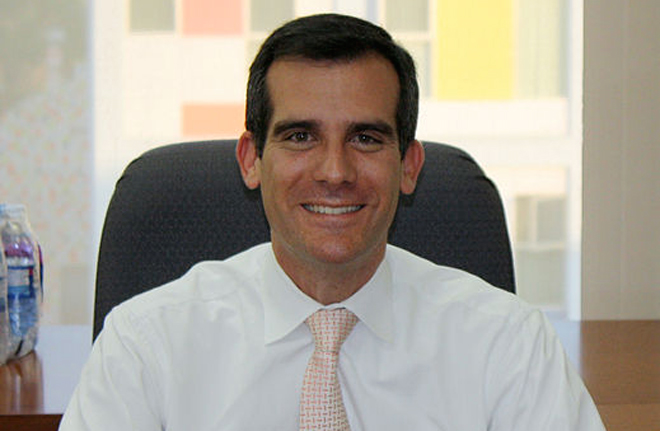 Four years ago, Eric Garcetti may have prevailed against challenger Wendy Greuel in the L.A.’s mayor’s race, but the real victor was public apathy. A decisive 75 percent of registered voters didn’t bother showing up at the polls for two candidates with platforms so risk averse they may as well have strapped themselves into child seats. That will hardly be the case this year. For the civic transformation that followed Garcetti’s election, we should thank the employees of the L.A. Department of Water & Power, who contributed so generously to his opponent. Once in, the mayor refused a truce, and began his siege of the city’s most unaccountable and, well, powerful agency—forcing upon it the kind of public oversight that it had evaded for generations. It was only a hint of battles to come. In the great real estate boom that began in 2014, the mayor pushed through a law requiring developers to build 10 square feet of low-cost housing for every 100 square feet built for the open market. More than anything, this began to reverse L.A.’s polarization into a city of haves and have-nots. His design competitions to remake the crumbling L.A. City Mall, for example, and the soulless Pershing Square inspired a wave of leading architects to turn dozens of our worst public eyesores into world-acclaimed symbols of our resurgence (backed by some of our wealthiest patrons, who had never been civically minded before). Garcetti’s economic record can best be summed up by his successfully wooing the headquarters and factory of America’s electric car maker, Tesla Motors, to our city limits. Tax incentives and streamlined permitting helped, but what sealed the deal was the exclusive opportunity to win the naming rights for our new pro-football stadium, which will be opening this season as Tesla Field. For these reasons, Garcetti deserves your vote this June.