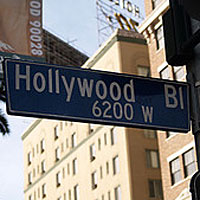 The Academy Awards may be glamorous, but the show can also become a headache for Hollywood residents, commuters, and businesses. Need to get near the Hollywood and Highland complex this weekend? Here’s what you need to know:

Hollywood Boulevard is closed between Highland Avenue and Orange Drive as event organizers prepare for the Academy Awards this Sunday. The street has been closed since February 19 and will not reopen until Tuesday at 6 a.m. Also, be aware that other streets in the surrounding area may be closed for short periods of time too.

Businesses on that stretch of Hollywood Blvd. are open this week but will be closed on Sunday. The MTA red line stop at Hollywood and Highland will also close following the last regular scheduled stop on Saturday and will not reopen until Monday at 6 a.m. Guess Academy Award attendees won’t be taking public transportation to the event.

In other Hollywood Blvd. news, Kodak has officially dropped their name from the theater where the Oscars are held. Broadcasters are busy practicing their lines, which now include “Live at the Hollywood and Highland Center.”