Home L.A. History A Peek Inside the Hidden Workshop that Keeps the Original Farmers Market... 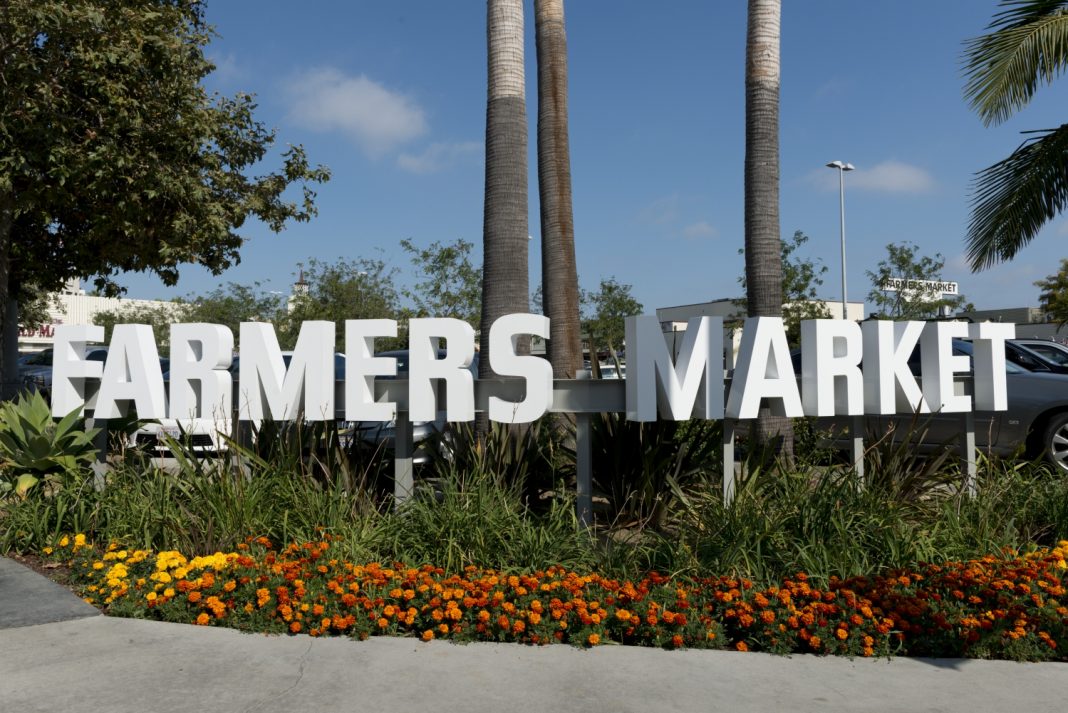 “You see how that cow’s head is bent all the way to the right? That’s because drivers kept bashing it,” Alain Moriau explains. “We made it bigger, but people still go the wrong way. That’s one unlucky cow.”

Moriau is walking across the busy parking lot at the Original Farmers Market, explaining that this wrong-headed cow is one of several metal statues made to direct traffic. There’s also a goat atop a boulder, a rooster (the Market’s sort of unofficial mascot), and an oversized shopping cart to stop people mounting the sidewalk. All of them made on site at the market’s open-fronted workshop. Hidden away from the crowds, it’s the engine that keeps the iconic L.A. landmark up and running.

Opening early for breakfast and keeping the lights on until the last drinkers leave their bar stools, the Original Farmers Market has played host to millions of people since it opened in 1934, and that means the demand for shopping carts and chair repairs is never-ending, says facilities director Moriau.

Painted in what’s officially called Farmers Market Green (there’s a Farmers Market Barn Red too), one of these distinctive carts was once found in an antique shop in Texas, and since day one they have all been assembled on an ancient jig.

It’s the oddest piece of equipment in a workshop that could give Home Depot a run for its money—though it’s much more fun.

Responsible for everything at the Market—replacing lightbulbs, cleaning gutters, trimming trees, repairing stalls, swapping out heater gas cylinders, riding a cherry picker 40 feet in the air to adjust the tower’s clock, or creating metal goats for the car park— this workshop does nearly all its own design and is virtually self-sufficient, notes Matt Stayton, facilities coordinator.

Walking around the Market you’ll notice that the history of the area and the Gilmore Family—who still own the land and lived in the (sadly) off-limits adobe house—is presented in a number of colorful exhibits. That past includes oil strikes, a baseball team, a race car stadium, a drive-in movie theater, a lion cub, and more. The history is a vital part of the Market’s charm.

Many of the stall holders are generational family businesses, and Stayton himself is one of the Gilmores carrying on the tradition.

His great-great grandfather was Arthur Gilmore and his great grandfather Earl Gilmore, and while Matt recalled coming to Kip’s Toyland as a child and buying magic tricks, he never felt obligated to be part of the team, until 2009, when he found himself involved in the 75th anniversary celebrations.

“At around 4:30 there’s the smell of the donuts being cooked at Bob’s, then around 6 a.m. there’s the bacon frying for breakfast,” says Moriau, who admits that getting to sample new donuts is one of the job’s perks, as are fresh eggs from the hens that live in the workshop.

Before the duo head back to work, Matt points to the roof of the theme park-like Gilmore Gas Station: “That man on the roof, waving the checkered flag? His name is Dominic.”

It’s just another secret from one of L.A.’s favorite hangouts.