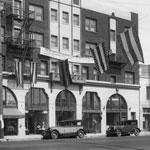 After closing for business in the 1970s, the heart of the Dunbar Hotel, the South L.A. lodge famous for becoming home away from home to jazz music greats during the 1930s and ‘40s, is beating once again.

Early this summer, Thomas Safran (of Thomas Safran & Associates)—in partnership with then-city councilwoman Jan Perry, the Los Angeles Housing Department, the Community Redevelopment Agency, and the Coalition for Responsible Community Development—opened Dunbar Village, a new, $30-million housing center comprised of three adjacent developments on Central Avenue, including the hotel. Combined, the new center offers 83 apartments for low-income families and seniors with on-site amenities like management and maintenance, laundry rooms, outdoor barbecues, a health and fitness center, and a media room, and group programing like movie nights and monthly birthday parties. Rents range from $437 to $875 per month.

Despite these site upgrades, representatives say that much of the Dunbar Hotel, which was built in 1928 and designated as a city Historic-Cultural Landmark in 1974, has been faithfully restored. Even some of the faces seen around the village are familiar. Retired surgical technician and new resident London Carter used to visit the hotel in its heyday. “I was born in South-Central L.A. in 1954,” he told the Los Angeles Times. “Back then Watts had the Watts Towers, Hollywood had the Chinese Theatre, and we had the Dunbar Hotel… I told [the Dunbar Village management] it would be a dream to say I live at the historic Dunbar Hotel.” He’s now living in the building’s “penthouse.”

Like the lodge, another piece of local cultural pride remains in place. The Central Avenue Jazz Festival, which takes place in front of the hotel each summer, returns this Saturday and Sunday.

CityDig: A History of Central Avenue (Just in Time for CicLAvia South LA)