Home Uncategorized On Your Mark! This Weekend’s Nautica Malibu Triathlon By The Numbers 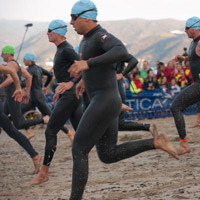 On Saturday and Sunday, 5,350 professional athletes, para-athletes, amateur athletes—and yes, celebrities—will swim, bike, and run their way to the finish line of the 26th annual Nautica Malibu Triathlon on Zuma Beach. A fund-raiser for Children’s Hospital Los Angeles largely supported by an Entertainment Industry Challenge, the sporting event attracts a Hollywood crowd like few others. So how does the triathlon place? We took some measurements

9
The number of permits pulled to host the event on PCH. One lane of the highway in each direction is closed to make way for the course.

4:30 a.m.
The time that all 150 volunteers will arrive on Saturday and Sunday morning to work at the event.

45
The number of markers that will be used to write numbers on athletes legs and arms before they compete.

62-66
The average water temperature, in degrees Fahrenheit, during the event.

350
The number of athletes on Team Disney, the largest corporate team put together this year. The second-largest group, Team Warner Bros. consists of 180.

37,000
The number of cups of water that will be handed out to athletes during the competition.

7
The number of times celebrity participant Jon Cryer has suited up for the event. Felicity Huffman, David Duchovny, and Mark Feuerstein are also regulars.

$5,185,406
The amount of money the Malibu Nautica Triathlon has raised for Children’s Hospital L.A. to date.

Spectators are welcome at the event. Find information on where to park and other event details, including how to donate funds, here.