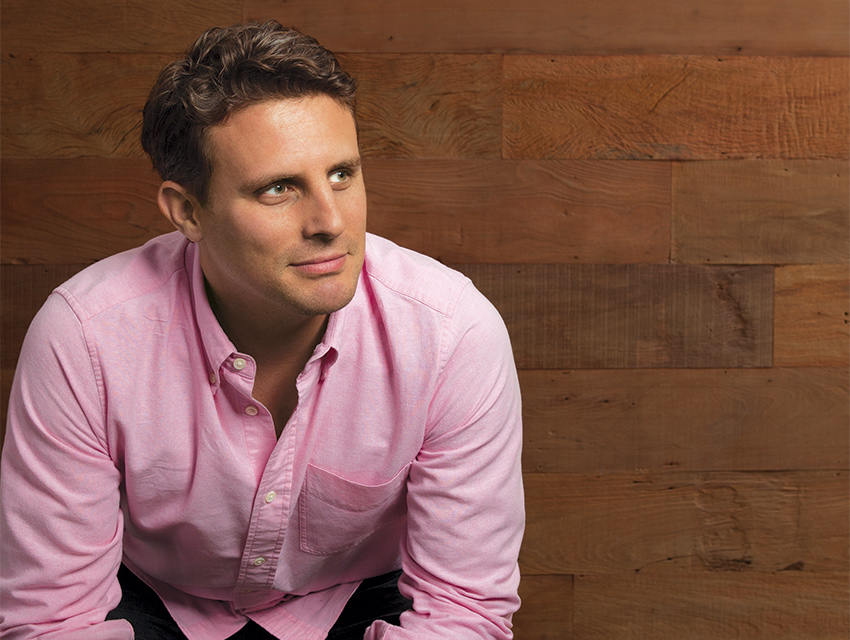 Many a start-up has begun with two simple premises: to take the frustrations out of living life and to make millions of dollars in the process. Think Uber, Airbnb, Tinder. In that way, Dollar Shave Club is no different. The company was founded three years ago in Venice, the heart of Silicon Beach, with the idea of selling razors to men online. After all, buying a pack of disposables at the store can be expensive—and a pain. A guy could find himself on the wrong end of a Taser, even a tranquilizer dart. At least that’s the gag in Dollar Shave Club’s first TV commercials, which came out last fall, showcasing the kind of humor that has helped the brand stand out.

Dollar Shave isn’t the first men’s product to woo customers by being funny. Old Spice got a lot of mileage from the 2010 “Smell Like a Man” campaign, with Isaiah Mustafa’s washboard abs matched only by his comical bravado. But Dollar Shave is pitching itself as a scrappy Web start-up whose youthful founder, 37-year-old Michael Dubin, isn’t above poop jokes. For the company’s inaugural YouTube spot, uploaded on March 6, 2012, Dubin dons his spokesperson uniform—jeans, button-down shirt with rolled-up sleeves, and a tie—and delivers his deadpan sales pitch in a drab warehouse. Whether he’s being pulled along in a kid’s wagon with an employee, lightly dissing Roger Federer, or being shadowed by a dancing bear, he never misses a beat. The slogan? “Our blades are f**ing great.” The minute-and-a-half promo cost just $4,500 to make and netted the company 12,000 new customers (aka subscribers), who signed up to receive monthly shipments.

“That kind of humor is actually difficult to do in a way that feels natural and honest,” says Mark Tungate, author of the 2008 book Branded Male: Marketing to Men. The off-color slogan also puts it beyond the reach of anything any of the megabrands can try pulling off on TV.

One person who caught the video that day was David Pakman, a partner at the New York venture capital firm Venrock (and former CEO of eMusic.com). He flew to L.A. to meet Dubin and his team, following with two rounds of investments in Dollar Shave Club. “Michael built a very human brand,” says Pakman. “I think people feel like he’s their friend; he’s got their backs. And they appreciate that.” With 2.1 million subscribers thus far, Dollar Shave Club is on track to surpass $140 million in revenue in 2015—more than double the amount from a year ago.

Dubin’s moment of entrepreneurial kismet arrived at a Westside holiday party in 2010, when he was talking to a friend’s relative who had a warehouse full of razors to sell. “It was total serendipity,” Dubin says in a voice that rings across his office. In person he is a more grounded version of his on-camera pitchman and in sharper focus: more smartly dressed (nicer button-down shirt and jeans), less goofy, but still with nary a hint of stubble on his chin or a hair out of place. At the time of the party, he was working for a firm that helps corporations like LG and Ford attract eyeballs to company Web videos. He was once an NBC page in New York, then became a news producer before getting into digital marketing. All the while he was taking improv classes at the Upright Citizens Brigade—eight years’ worth, something he notes to me and also in a promotional video for the company. “It was more of a hobby,” says Dubin, who moved to L.A. five years ago. “There’re so many similarities between building a comedic argument and writing a legal argument or a business case or whatever. Your thoughts have to be organized, and you have to establish certain things first so you can build on them.”

With that ample supply of shaving equipment, he ran a one-man experiment out of his apartment—putting together a Web site, setting up the shipping infrastructure, and launching a beta site in 2011. Dubin sold razors in bulk as well as through subscriptions but found that his customers preferred the latter. A year in, when he was sure that what he had created wasn’t a fluke, he pooled the money he’d made with “the rest of my life savings,” Dubin says, along with seed funding from the Santa Monica incubator Science. With that he shot the dancing bear video and readied the full-scale rollout. It coincided with a serious growth spurt in Silicon Beach that would come to include not just Venice and Santa Monica but Culver City, El Segundo, and Playa Vista. To date, the VC-backed outfit has raised $148 million, and it’s valued at almost four times that, though the company hasn’t turned a profit. Despite being part of a world where success is often gauged by the size of your stock market debut, Dubin isn’t in any rush. “We are in control of our destiny,” he says. “If we need a lot of money, we’ll consider an IPO, but at this exact moment in time, we are not sitting around thinking about what our stock ticker would be.”

Dubin launched his venture as the men’s grooming market was beginning to take off in the United States. The aughts saw the emergence of metrosexuals, a subspecies of straight men characterized by how uncomplicated they felt about primping. If the term suggests a kind of discounted masculinity, the concept itself has led to a more wholesale approach to grooming among millennials, who are as comfortable using antiaging cream as they are hair product or, for that matter, growing a beard big enough to house a gopher or two. Still, a stubble-free face will never truly go out of style. The early go-to tool to tame it, the British-born folding straight razor, would eventually lose out to the American hoe-shaped safety razor, which was patented in the 1870s. Skip to the 1970s, another hirsute era, when Gillette and Schick—essentially the Coke and Pepsi of the century-plus-old business—entered into an arms race that continues to this day. It began when Gillette came out with the twin-blade Trac II and sold the replaceable heads in multipacks. Along the way have come three- and four-blade numbers, heads that pivot, and of course an array of fancy-looking handles on which to mount them. But even as the gear has become ever more elaborate, the moneymaking part has stayed the same. “You pay a reasonable amount for the razor and then pay a lot for the blades,” says Tungate. “It’s a classic marketing technique.” Think printers and cartridges.

Only now, companies like Dollar Shave have nudged the battle for turf in the $2.9 billion U.S. shaving market toward the means of delivery. One of DSC’s strongest competitors is Harry’s, the New York-based e-commerce company established (in 2012, too) by one of the guys behind Warby Par-ker, the online eyeglasses disruptor. Unlike Dollar Shave, which sources its razors from South Korea, Harry’s has its own factory in Germany. There’s also Man-Pack, which sells briefs, boxers, and socks, along with shaving products and a slew of lesser-known efforts with names like Close Shave Society and Wet Shave Club. Hoping to recoup the estimated 3 percent of market share lost to these newcomers, Gillette introduced its own subscription-based offshoot last year. A monthly delivery of disposables from Dollar Shave costs $3 to $9, depending on whether you prefer the Humble Twin (five twin-blade cartridges a month) or the Executive (four six-blade cartridges)—about the same as what Harry’s charges. It’s not necessarily cheaper than what you find in the store, but it’s not more expensive, either.

Dubin is taking the same approach with other products as he diversifies from top to bottom. A couple of years ago the company introduced One Wipe Charlies, a scented Wet-Nap of sorts for the toilet (“Yeah, bitch, butt wipes,” Dubin says in another YouTube ad). “We get guys comfortable talking about these things, and trying new things, and say, ‘Hey, here’s a better way to wipe your ass,’ ” says Dubin when I ask him about the leap to, well, an entirely different set of cheeks. In March came a line of hair products—gel, clay, cream, pomade—as well as a mobile app to help sort through the muddle. Dubin says 40 percent of his razor buyers now purchase products from the newer lines. They’re all part of his long-stated ambition to own the men’s bathroom.

That has meant being involved in almost all aspects of Dollar Shave’s operation, from designing product packaging to overseeing what appears in the “Bathroom Minutes” (reading material for members). When I arrive at the company’s headquarters, a converted two-story house in Venice with a labyrinthine layout, Dubin is with his 15-or-so-person creative team in a meeting room, going over plot points and dialogue for a new series of commercials that would hit the airwaves in August. The mood is jovial; ideas are flying. On one wall a cursive neon sign purrs get back to work. Someone mentions the Caribbean Essence bath oil skits on Saturday Night Live—the ones where Tracy Morgan would emerge from the water while a woman relaxes in the tub—and the team starts riffing on the gag. “Hold on, but do men even shave in the bathtub?” somebody asks, and everyone laughs. Next idea.

What had been a staff of 5 full-time employees is now about 140, including the communications folks, programmers, R&D people, and a newly hired HR head (from Coca-Cola in Atlanta), who until recently were divided among three offices in Venice. Shortly after my visit, Dollar Shave relocated to a 26,000-square-foot building in Marina del Rey. Practically, it means having everybody under one roof. Symbolically, it means staking a bigger claim in Silicon Beach and in L.A.

But to reach his target of becoming a “multibillion-dollar lifestyle brand,” Dubin will need a lot more help. The L.A. tech scene is facing a talent crunch, especially among computer engineers, who have a tendency to head straight for the Bay Area as soon as they finish school. Better pay, greater prestige. Moreover, as Dollar Shave grows larger and its offerings become more layered, keeping the personality of the company—one that is so closely identified with its founder—will be a challenge. “I am not going to say that I am not a big piece of how this brand comes to life,” says Dubin. “Ultimately the best thing any CEO can do is to build a company that can run without him or her. And that’s the goal.”