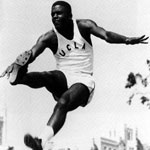 Jackie Robinson, the baseball great known for becoming the first African American to play in the Major League, rose to national fame when he joined the Brooklyn Dodgers as a first baseman in 1947. Robinson may be remembered best for the cultural impact his baseball career and personal character had on the civil rights movement (both feature largely in 42, a biopic out this week about the icon) but his lesser-known record as a college athlete is no less impressive. In addition to baseball, Robinson suited up for football, basketball, and track at Pasadena Junior College, where he was an all-around star. He later transferred to UCLA, where he focused primarily on football and track. Unlike so much of the coverage of Robinsonfrom the same period, this clip from the January 18, 1940, edition of The California Eagle—a small story about the UCLA men’s basketball team’s rivalry with USC—does not reflect the racial attitudes of its time. What it does reveal is a sports legend in the making.