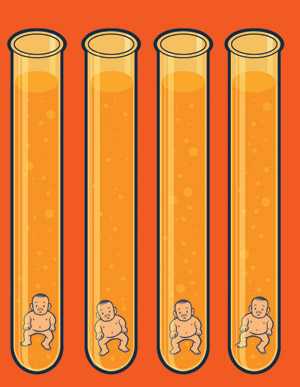 Forget Bernard Madoff. He just decimated people’s life savings and stripped charitable foundations and college endowments of their money. The object of our rage is Nadya Suleman and her eight premature babies. The world may be crumbling, but on radio and TV, in the blogosphere and around the watercooler, people are possessed by this megamom. In my own living room I have heard, “She should be sterilized. She ought to be shot.” Those statements have not just been rhetorical. Suleman has received real death threats.

I understand the anger and share it. Suleman is a breeding machine who has to mother not only the incubated eight—preemies who will be prone, experts agree, to any number of developmental problems in the years ahead—but six other small children at home. She has no husband, no partner, no job, no means. She has been living on disability because of a back injury suffered at the psychiatric hospital she worked at. (Yes, the jokes come quickly: She shouldn’t have been employed there, she should have been locked up.)

Her public appearances—particularly the leadoff on the Today show —were alarming. She had a zoned-out, beatific spookiness when she talked about her kids and about how much she loved them, a spookiness that was underscored by her perfect French manicure and the inflated lips. She wasn’t merely trying to look like Angelina Jolie but to out-family her. Nadya Suleman, it seems, has made the L.A. rounds, gyrating between a Beverly Hills fertility clinic and the plastic surgeon around the corner. One guy was filling her face with collagen, while the other was filling her womb with embryos.

This is celebrity culture gone mad. Did Suleman pore over pictures of the Jolie-Pitts with their photogenic children and say, Hey, not only can I look like that woman , but I can have more babies than she? Then I will be somebody. Even Angelina herself might notice me. (For the record, the actress has said she finds the octuplet mom creepy.) That is the ultimate twisted hope: to out-celeb the celeb, to inhabit her skin. Which is what Suleman appears to be trying to do—an act of interior stalking.

So yes, she is “creepy,” and yes, it is hard not to feel fury at what she has done, just as it is hard not to feel fury at the fertility doctor who enabled her to fulfill her procreative fantasy by putting back all those embryos, knowing she already had young children at home, knowing she was someone who got pregnant fairly easily with his interventions. The cadre of the outraged is calling for his head, too—or certainly his medical license. But in denunciating Suleman and her doctor, some have made the mistake of denunciating high-tech baby making and those who avail themselves of it. If a woman wants children, she can adopt, the thinking goes. There are babies everywhere who need a home. To go through this invasive, expensive stuff to have a child is spoiled, elitist, narcissistic.

I heard all that back when I was trying to get pregnant 20 years ago. The details of the quest are still sharp in my memory—the shots, the stirrups, the unrequited longing. I tried every trick the fertility wizards had to offer, from artificial insemination to in vitro fertilization. I made embryos aplenty. I prayed for them. I sang to them. I saw them under the microscope at the four-cell stage pulsing with promise moments before the doctor put them back in my body. Then nothing. They wouldn’t stick. I curled up each time in grief.

My pursuit was not fun. It was costly, knocking a hole right through the center of my marriage, which took a while to heal, not to mention right through the center of our savings. The naysayers and even some who loved me tried to nudge me toward adoption, implying that my drive to get pregnant was somehow wrong, greedy, unseemly, implying that I found adoption—and by inference, adoptees—somehow second-rate.

I bristled then at such talk, and I bristle now. When I was unable to get pregnant, I did not adopt. I was married to a man who had four boys from an earlier marriage, and I had the complicated, joyous experience of parenthood. What I wanted was my—our—biological baby. That is a natural instinct. It is not perverted or selfish. Way back when, before she had her dozen plus, Suleman might have had that same desire for a biological child, a desire to be pregnant and nurse and rear and love and have a recognizable splash of your own DNA on the planet. Of course, she went too far.

With the help of an unchecked fertility doctor, she pushed that instinct into something ravenous and needy because she is ravenous and needy. When she turned up with a jam-packed womb, she was offered the chance to reduce the number of fetuses she was carrying. That would have been healthier for her and for the babies. But she refused to undergo what is called “selective termination”—a clunky euphemism for eliminating some of those fetuses. Any of us who attempt in vitro fertilization are warned of the possibility of a multiple conception, and you gear up ahead of time and try to decide what you would do, how many you would carry. You are tiptoeing—and you know it, if you are trying to be responsible—into morally complex terrain.

Nadya Suleman does not fi t any definition of responsible. She gives everyone who has ever tried high-tech baby making a bad name. So does her doctor. Should there be a legal limit on how many embryos can be put back at once, knowing that the success rate for in vitro fertilization is still low (the more embryos, the better chance of a pregnancy)? Every time something like this happens—mixed-up embryos, extreme multiple births—there is an immediate cry for regulation. But those of us who defend a woman’s right to choose have to be careful. Do we want others deciding what we can and cannot do with our bodies? Doctors, religious leaders, the state? Clearly the doctor should not have put back eight embryos. Just as clearly, Suleman should not be having a slew of infants she can’t provide for, leaving, no doubt, taxpayers on the hook. Three of her first six kids are handicapped, and she likely receives $793 a month for each. I assume that at least one or more of the octuplets will end up also being eligible for state aid. That is a sad and unsavory prospect. But whatever else we say, they are here now and we have to root for them, knowing how crazy and how difficult—really crazy and really difficult—their road will be.