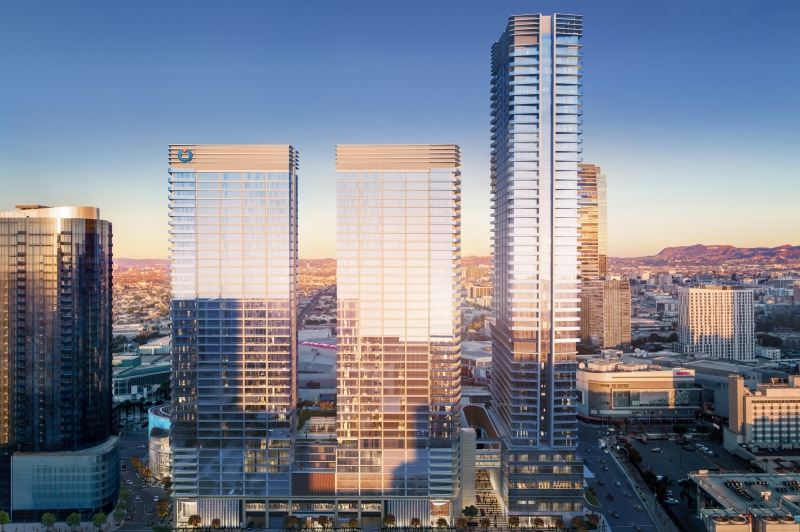 A decade ago when CallisonRTKL architects finished construction on L.A. Live in downtown’s South Park, much of the neighborhood was just parking lots. Not anymore. A forest of high-rises is springing up from the asphalt, radically transforming the skyline.

In terms of sheer scale, though, few projects can match Callison RTKL’s Oceanwide Plaza. Replacing a 4.6-acre parking lot across the street from Staples Center, the $1 billion, three-tower complex will include a Park Hyatt hotel and 504 ultra-luxury condominiums. Fittingly, it all sits atop Bank of America’s former underground vault.

“We have a jogging track 100 feet in the air. There are two acres of landscaped garden deck with basketball courts, barbecues, fire pits, and three pools with splash pads,” says Daun St. Amand, a senior VP with the firm. Below all that will be restaurants along with an open-air shopping center. “When we did the master plan for the L.A. Live sports and entertainment district 20 years ago,” says St. Amand, “this site was planned to be the retail district.”

The backer, Beijing-based Oceanwide Holdings, was among a spate of Chinese companies sinking money into L.A. real estate before their government recently restricted foreign investment. (The Dalian Wanda Group is selling eight acres in Beverly Hills where it had planned to build a $1.2 billion condo and hotel complex.)

And while the slim, rectangular towers are fairly staid, a block-long LED screen at their base is not. There’ll also be terraces to be used for special events that spill over from L.A. Live and the Convention Center, the latter of which has long struggled with bookings due to limited hotel rooms nearby. Everything is slated to come online sometime next year; condo prices haven’t been made available, but don’t expect any bargains at the tallest residential building in L.A.