Home Activism Inspired by the Occupy Movement of the 2010s, Activists Pitch Tents in... 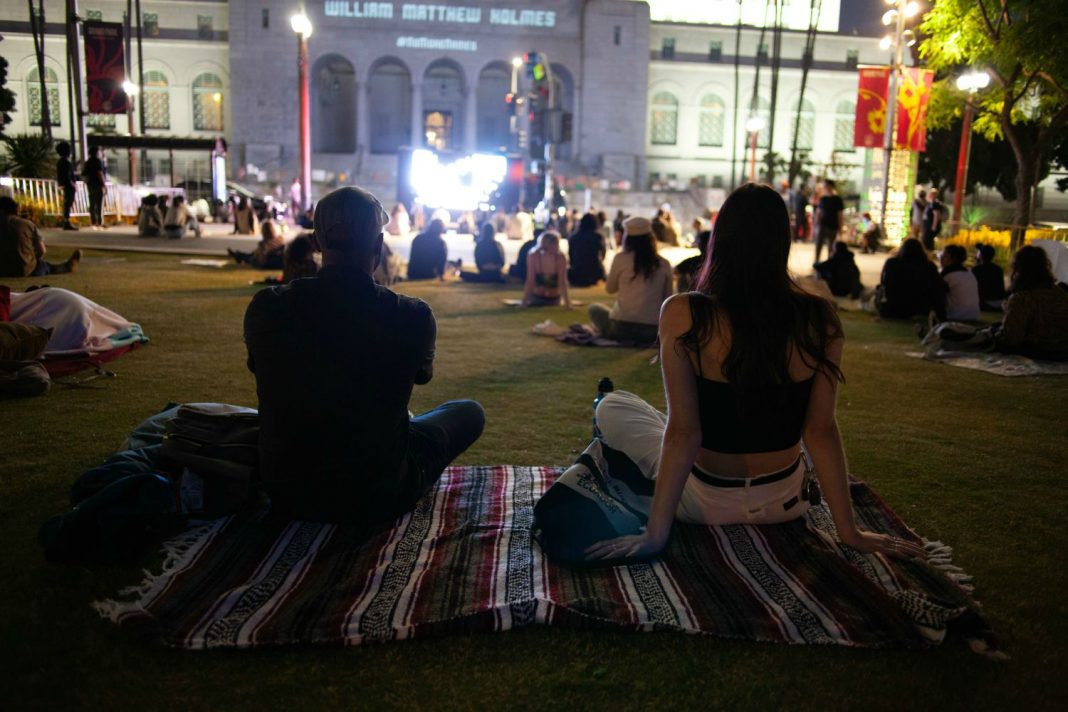 Black Future Project formerly went by Occupy BLM, a nod to the group’s activist influences. Both the 2010 Occupy movement and the Black Lives Matter movement are part of its DNA. “We’ve had a lot of former Occupy members dropping in their two cents,” Butler says. “A lot of what they tell us is to watch out for protest infiltrators.”

“You can’t say defund the police and this, that, and the third, and then when they say go home, you’re like, OK, I’ll go home at 6 p.m.,” Butler says.

Over the course of an average day, the Black Future Project will have as many as 40 people milling around the compound, with around 20 staying through the night. News about the settlement has spread largely by word of mouth at the daily protests throughout the city, while some have just stumbled on it by chance.

The originators of the project met when they were detained together. On June 3, more than two dozen protesters in Grand Park refused to comply with LAPD dispersal orders, eventually resulting in their detention. “We were all detained on the lawn that we’re now occupying,” says Krizia Berg, who’s been part of the projects since its inception. “Isn’t that fantastic?”

On Monday, the tents encircled a central canopy that serves as a kitchen, with another tent beside it acting as the pantry. That night, the activists prepared their first home-cooked meal. As one person held a cell phone flashlight overhead, a resident, Lisa, sliced zucchini and squash at a bias. Nearby, another group lay down bricks purchased that day at Home Depot to make a DIY fire pit. Over that, they placed a metal grate and a 24-quart pot filled with rice and water. The squash and zucchini went onto a small portable grill filled with smoldering hickory wood.

“We also want to create a space that breaks the curses of some things that people of color and black people suffer from, like unhealthy eating,” Butler says.

The Black Future Project has had frequent encounters with downtown’s population, sharing food and supplies when they can, but their encounters with law enforcement have been more sporadic than expected. “In the last two days, I haven’t even seen a park security guard down here,” Butler said on Monday. “They know this is our spot.”

Grand Park falls under the jurisdiction of the Los Angeles Sheriff’s Department, which did not respond to a request for comment.

Besides the act of simply occupying the park, the activists have endeavored to turn it into an educational space, screening movies and documentaries including Do The Right Thing, I Am Not Your Negro, and 13th. It’s a bit like L.A.’s usual outdoor movie season, but updated for turbulent times. Last Saturday, more than 50 people came to see 13th, Ava DuVernay’s documentary on mass incarceration and the prison industrial complex, setting down blankets, folding chairs, and passing around snacks. Another activist group, Black Leadership Ally Coalition (BLAC), brought a screening truck and moderated a discussion afterward.

“When I was a child, I never thought that anyone would be asking me about these kinds of things,” said James Cheeks III, a director who came to the 13th screening. Growing up in Memphis, Tennessee, Cheeks remembers camping with his Boy Scout troop in Nathan Bedford Forrest State Park, named after a Confederate general and the first Grand Wizard of the Ku Klux Klan, and getting into fights with the other scouts over their use of the N-word.“Sometimes I would have to ride with one of the kid’s dads and his dad made me ride in the back of the Subaru with the fishing poles. ‘Don’t mess up my upholstery.’ That’s all he cared about. You can tell they passed that racism down to their kids.”

The park has become a space where activists can work to undo the trauma of the past. Butler, who grew up in foster care until he was 15, describes the project like a giant group home. “A home with a purpose,” he says.

RELATED: ‘Black Lives Matter Foundation’ Has Seen a Surge in Donations–but the Money Isn’t Going to the Movement

What’s On in L.A. This Weekend: This Ain’t No Picnic Fest, Meshed Realism and Sunday Supper at Caldo Verde

Black Restaurant Week, Free Concert at Grand Park and Other Great Things To Do in L.A. This Weekend