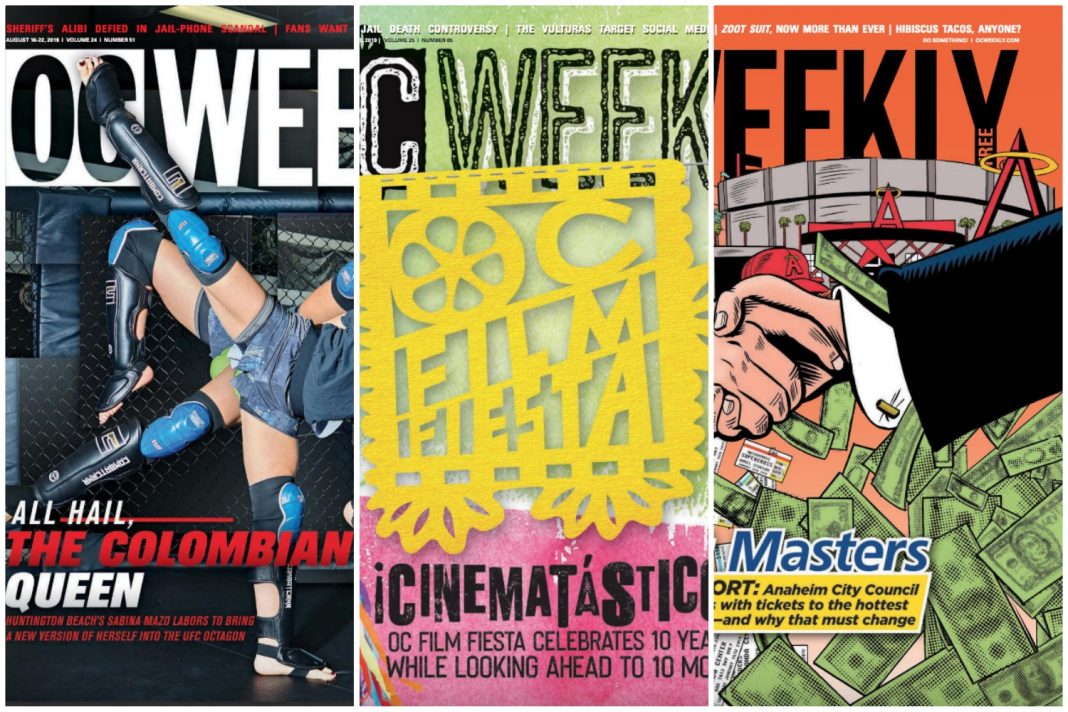 At a mandatory Monday morning meeting, he and the 24-year-old paper’s other editorial and sales staffers were informed that owner Duncan McIntosh Company was pulling the plug. In the hopes that an eleventh-hour sale might save the paper, the Weekly‘s staff kept the news under their hats until this afternoon, when they dispatched a farewell tweet, a hearty “Adios, motherfuckers.”

Adios Motherfuckers! Today, the day before Thanksgiving, our owner Duncan McIntosh Company has decided to shut us down. For the last quarter century, we’ve tried to bring good stories to Orange County. It’s been fun, but now we’re done. pic.twitter.com/Y51ynOHbgp

“It seemed like we were the cockroach king for a while,” San Román says of the Weekly‘s longevity in a tough market. “We fought to maintain our journalism as long as we could until ownership made the decision that we would no longer be a paper.”

Although the shuttering was abrupt, it wasn’t entirely out of the blue. Throughout the country, alternative weekly newspapers have struggled to make their business model work in the digital age. OC Weekly was one of several venerable alts offloaded by Voice Media Group in 2016, when the publisher decided to focus its attention on its “successful digital agency business.” (Full disclosure: I was employed by VMG-owned LA Weekly when that paper was sold to Semanal Media in 2016, and was among the staffers laid off in the wake of the sale.)

When Duncan McIntosh bought the paper, there was some optimism among editorial staffers—for the first time in a long time, OC Weekly would be owned by an OC entity, albeit one that had mostly trafficked in boating publications. As then-editor Gustavo Arellano wrote at the time, “Incongruous pairing? Maybe. But don’t forget that this paper’s original owner made his millions from selling pet food. And Señor McIntosh says he likes what we do and has promised to invest more money in us, but not at Aaron Kushner levels of insolvency—that’s a good start.”

Despite the new ownership’s initial enthusiasm and increased investment—which included some additional staff and modest raises in pay, according to San Román—in October 2017, Arellano was informed he’d have to lay off half the editorial staff for financial reasons. Rather than do that, he resigned; Arellano has since gone on to become a staff writer at the Los Angeles Times. Editorial staffers were reportedly never supplied with actual figures regarding the company’s financials.

Aaaand it’s a wrap. A day before Thanksgiving, OC Weekly owner Duncan McIntosh has decided to close down the paper down indefinitely. I’m grateful for my time as a Weekling and appreciative of all the opportunities to tell stories other outlets wouldn’t. OC Weekly 1995-2019 pic.twitter.com/aN9q2ykNuf

San Román refers to Arellano’s departure as a “very visible turning point” in the paper’s slow demise. As staffers left for for other opportunities, their positions were eliminated, notably the music editor post vacated by Nate Jackson in June 2019. Staff writer Anthony Pignataro, who’d cut his teeth at the paper in the mid-’90s, was a rare hire in the post-Arellano era, but in addition to his duties as a writer, he also had to serve as the brand’s social media manager.

“We tried for a quarter century to inject a lot of color and old-fashioned, good reporting and analysis [into the news]…trying to give a voice to people who wouldn’t have had it, to tell stories that weren’t being told,” Pignataro says. “Basically, I owe my career as a journalist OC Weekly.”

With the Weekly‘s shuttering there’s an overwhelming sense that Orange County’s sparse media landscape just lost a very vital component. But beyond that, San Román worries that the writers of color just lost another publication where they were able to find a home.

“We were the rude press, but we were diverse about it,” he says. “This is a remarkable loss for newsroom diversity…[Orange County] is a desert, it always has been, and it returns to that state today with the layoffs of three more Latino media makers.”

RELATED: Why L.A. Taco May Be the Future of Alternative Journalism in L.A.

Hollywood Confidential: How L.A. Weekly’s Nikki Finke Gives the Industry What it Deserves