Home Uncategorized Nothing but Net Worth: 5 Celebrities Who Should Bid on the Clippers 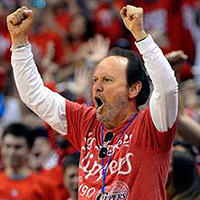 On Tuesday, Clippers owner Donald Sterling was banned from the NBA for life (and fined $2.5 million) for making a series of racist remarks that his purported mistress, V. Stiviano, caught on tape. NBA Commissioner Adam Silver is hoping to force a sale of the team, which would take place should three-fourths of the other owners in the league vote to remove Sterling. The 80-year-old proprietor, who bought the Clippers in 1981 for a reported $12.5 million (today Forbes values the team at $575 million), maintains the team is “not for sale,” but seeing as a billion-dollar deal is looking more and more likely, we figure it’s time to start theorizing about future owners.

Some of L.A.’s wealthiest dwellers—David Geffen, developer Rick Caruso, newly minted Angeleno Oprah—have already thrown their hats in the ring, and surely they’re excellent options, but when it comes to cool-factor and court-side appeal, we’ve got a few other folks in mind. (After all, we’re competing with teams like the Philadelphia 76ers, owned in part by Will Smith, and the Brooklyn Nets, who owe part of their existence to Jay-Z.) They may not have billions in the bank, but we still wouldn’t mind seeing the team go to any of these familiar faces—at least in part. Seeing as he’s already a part-owner of the Arizona Diamondbacks, investing in the Clippers doesn’t seem like much of a stretch—especially considering the funny-man is a diehard Clippers superfan.  In light of the Sterling saga, he tweeted the following:

He may own the team but they belong to us. Go Clippers!

Alas, our fair Billy is apparently only worth $45 million, so he’d need to find a few fellow backers. He may be slightly awkward on The Office, but it’s all a front: he’s way more awkward in real life. The comedian famously lured Blake Griffin into the back of his mini van for an interview, which becomes only slightly less strange in light of Wilson’s fandom. Like Crystal, though, he’s a little short on dough (his net worth is a paltry $14 mil)—perhaps the two can start a joint venture. The R&B/Pop/Hip Hop songstress has been known to grace the Staples center with her fly-as-hell presence, and she professed her support for the boys in blue and red after they won a game against the Houston Rockets. With an estate worth $15 million, she, too, would need to scrape up some more cash to get in on the deal, but how good does her mean mug look on that court? Her face has “part-owner” written all over it. The analyst-cum-sports guru may be a Celtics fan at heart, but anyone who is a Clippers season-ticket holder (and has $15 million to their name) deserves a shot in this hypothetical situation. “The Clippers are like the token hot-and-crazy chick that you shouldn’t date, and you know it, only you can’t help yourself,” he wrote once on ESPN. That’s as good a reason as any to invest in our book. Besides, as one of the nation’s most lauded sports writers, he’d certainly bring some credibility to a team that has been described as “the most ridiculed, least successful franchise in sports history” (also by him). The former Malcolm in the Middle star is all grown up and raring to stake a claim in his favorite team, an affection he has cultivated since 1994. Muniz has somehow managed to avoid going the way of most child stars (that is to say, he hasn’t squandered the earnings from his ‘90s stardom), and so has been able to nurture a sizeable nest egg of $40 million—again, not enough to buy the team outright, but perhaps enough to own a piece of the franchise. Apart from that, Muniz is like the hipster of Clippers fans: he liked them before they were cool (or sort of good, for that matter), so we’d trust that he’d have the team’s best interests in mind.