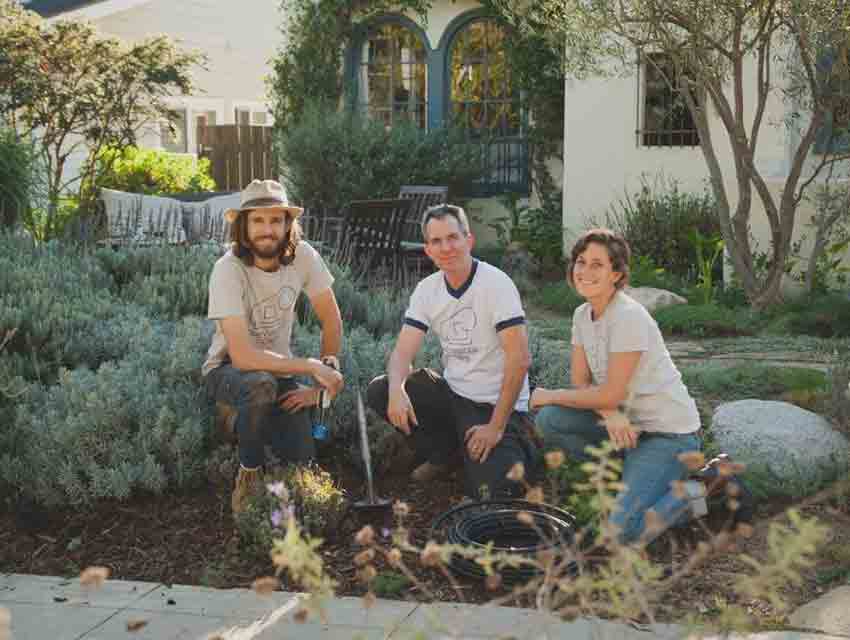 As home owners are getting savvier about saving water, they’re turning to ideas like recycling the stuff from their washing machine and irrigating their yard with it. Gray water can be a simple way to minimize your hydro-print, but it gets confusing pretty fast. For clarity we spoke with Laura Allen, who, as cofounder of Greywater Action, leads classes on how to set up gray water systems, and Leigh Jerrard, a local contractor who owns Greywater Corps.

How much more expensive is it to use a contractor than install a system yourself?
One to two thousand dollars. It depends. The materials for the simple systems are a few hundred dollars, and so the majority of the cost is labor…. If it’s from a washing machine, like a laundry-to-landscape setup, they’re around $200. If you buy every single thing, it might be more like $300 or a little more. Like, for example, the wood chips are part of the system. And you can get wood chips for free or you can buy them. But just for the actual plumbing part, they’re around $200.

What’s the average gray water yield for a two-person household using a simple system?
It depends on the machine. The top-loaders use about twice as much as the front-loaders. And it depends on how much laundry you do. There’s a lot of factors. When we do our classes, we teach people how to do the calculation. One person will be using 60 gallons, and the person next to them is using 250 gallons a week. So there’s a huge range.

What do I do if I’m not getting enough irrigated water from the gray water system?
Most people don’t have enough water for the whole yard. You look at how much gray water you have, you look at your yard, and the best thing to do is pick a section of your yard that you can replace the drip water irrigation for gray water irrigation. So maybe it’s four of your trees.

How can I keep safe when using gray water?
It’s very low risk. If it’s a nonpotable water source, don’t drink it. You don’t want it to be pooling up, growing mosquitoes, that kind of thing.

How could California’s gray water code be improved?
It could definitely be improved, but a more immediate improvement could be local jurisdictions creating a more friendly interpretation and a streamlined process. The code can be applied in a way that is not that restrictive to home owners and doesn’t have to cost that much. The problem is that every single city, every single county, every single inspector applies a different interpretation to it. So they can add a lot of cost and time and headache to the process, which doesn’t have to be.

What kind of system has L.A. done it for?
The gravity-flow, no-storage system. You do need a permit, and if it’s gravity flow and doesn’t have a tank or pump, they have standard plans available that people can use. It used to take several months; now it takes several weeks. So it’s gotten better. It still has room for improvement.

And when do you need a permit?
If you change your plumbing. The only thing you don’t need a permit for is the washing machine when you access it from the discharge hose from the machine itself. People still make personal decisions about getting a permit for anything in the home, so gray water’s definitely in that category. More people are doing gray water than people are seeing the permit office. The downside is when people don’t have a process that’s reasonable, more people just ignore the process they do have because it’s not reasonable. Cities have a responsibility to make their process easy and affordable. It discourages professionals, more than anyone, because they’re the ones who are less likely to want to install them if they can’t do it legally.

What’s the biggest misconception about gray water?
I think people hear “gray water system” and think it’s just this one thing and that they can buy it or do it and that they’re gonna just now start watering their landscapes the same as before but with gray water. And that’s not how it works. There’s many kinds of systems; some are very simple and affordable, and some are extremely complex and expensive. We get people like this all the time in our classes. They come to this class and they think, “Oh, it’s affordable and I can do it myself.” And they think they’re going to install a system that waters their lawn. But the systems that are a few hundred dollars and you can install it yourself don’t water lawns. They water trees and bushes. The systems that water lawns cost $10,000 to $20,000, and you’re not going to do it yourself.

Have you seen an increase in interest in gray water since the drought became more in the public eye?
Since January things are just blowing up. Our phone’s just been ringing off the hook…. Somehow, when I came back from Christmas vacation, things just seemed like they shifted in some major way…. We had to hire. We’ve been trying to expand about four people in the last couple months. Business is booming for gray water.

What are the most common kinds of gray water systems?
There’s three that we do the most. There’s a simple laundry-to-landscape system, which is just a washing machine. It can be installed without a permit or inspection. It’s a one-day installation, but it can be as simple as sticking your washing machine’s discharge out the window. That’s a really simple gray water system. And the washing machines are pretty easy. A relatively handy home owner can install them themselves. The second one is a gravity-flow system. It’s also super-low-tech; you’re basically draining water from bathtubs, showers, laundry, etc. outside by gravity. And then once it’s out in the yard, you can split the flow to spread it out around the yard. The third one is what I call a simple pumped system. If you want a little more efficient irrigation or to spread the water out throughout a landscape or go uphill, you would need a pump. But we try to keep it low-tech.

If a homeowner is thinking of installing a gray water system, what should they do or know?
You can’t use any existing irrigation system with gray water. It has to be specifically designed. Anything that goes down the drain will end up in your soil, so they will have to pay attention to what products they use. Tide powder, for example, is full of salt. And that will start to build up in the soil. You don’t have to be crazy about it, but yeah, it’s nice to pay attention and use, ideally, organic soaps and shampoos and stuff like that.

What questions should a decent contractor be able to answer?
I would look at their track record, like how many systems they’ve installed, what their general approach is. It’s good to have someone who knows not just plumbing but knows plants. So on our crew we have permaculture guys and plumbers and people like that. You could ask if they can get permits for the systems they install. In many cases, even though gray water is now legal to install, permitting can be very challenging for some jurisdictions.

How much are permits?
However much it costs to do the permit drawings, which tend to cost thousands of dollars, because it’s sort of like a civil engineering exercise. It’s a tremendous amount of work for an engineer to draw it up. And those aren’t cheap fees. In addition, in the City of L.A. it’s maybe between $500 and $1,000 just for the permit fees. In some cases, the permit fees can be maybe half as much as the install.

How much gray water might a family of four produce, assuming they use an average amount of water?
A family of four might produce 150 gallons of gray water a day that could be recaptured and put to use for irrigation. For a normal house, that’s enough to water your whole landscape probably.

In terms of your water bill, how long does it take for the gray water system to pay for itself?
It takes a long time to equalize the cost of a gray water system. And that is because water is cheap. As it stands, water is about a penny a gallon. It varies with tiers, and then there’s a sewer service charge and all that, but that’s approximately what it is. If you install a system yourself, it might be able to pay itself off in a year or two. But if you hire us to do it, you may see savings of, I don’t know, $22 to $50 a month or something like that.

What are the biggest misconceptions about gray water?
A lot of people think gray water is illegal, and it is not illegal. In 2010, the State of California rewrote the building codes so that gray water is now legal throughout the state. In the smaller jurisdictions the building officials sometimes don’t even know this.