Home Uncategorized Not In Their Backyard 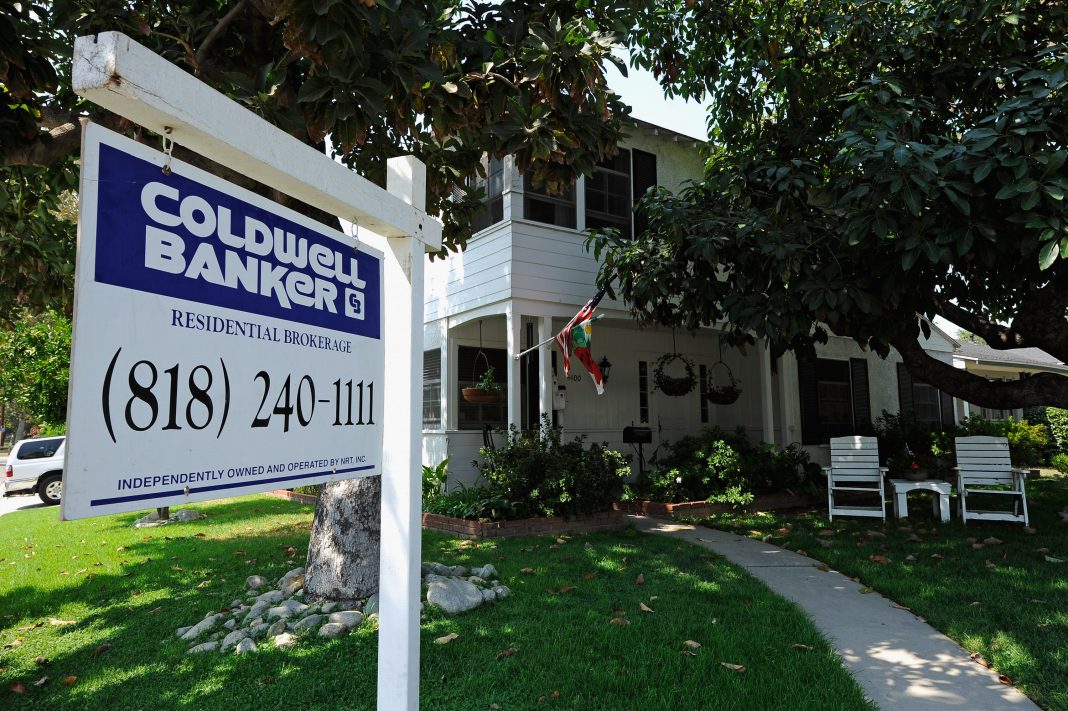 It’s standing room only at the Notre Dame High School cafeteria in Sherman Oaks. Though the meeting has yet to begin, the mostly elderly and predominantly white crowd of about 250 is already seething. A silver-haired woman named Wilma, working on her meal of tacos and tortilla chips (included in her $5 donation), takes out a flip phone to show off the object of her rage: a grainy photo of a McMansion going up on her block. “We all thought Sherman Oaks was a lovely neighborhood until this,” she says. Another woman, named Linda, borrows my notebook and draws a diagram to illustrate how a nearby building complex was able to evade city restrictions on density. ¶ The attendees are still writing down questions on green sheets of paper (“Why is there no traffic signal at Ranchito and Riverside?” “When will the asphalt on my alleyway be repaired? I’ve been watching it deteriorate since 1945.”) as Richard Close takes the podium. At more than six feet tall and clad in a dark blue suit, he carries the air of authority, and when he starts speaking into the microphone, the grumbling quiets. For 39 years Close has run the monthly meetings of the Sherman Oaks Homeowners Association as if it were an unruly political faction. His blue newsletter stokes and channels the anger of SOHA’s 2,100 devoted households, which, he likes to remind people, represent a powerful voting bloc in a city with chronically low turnout.

Anybody seeking or hoping to retain citywide office is expected to court the group, and not just at the candidate debates it hosts. Eric Garcetti has shown up no fewer than eight times. City Council president Herb Wesson came to the January gathering. Over the years Close has maneuvered SOHA to ride one populist wave after another, from the successful ’70s antitax insurgency of Proposition 13 to the failed attempt to carve out the San Fernando Valley from the City of Los Angeles in the early 2000s.

The main item on the agenda at tonight’s gathering is the expansion of the former headquarters of the Sunkist Growers association into a $100 million office, residential, and retail redevelopment on Riverside Drive. SOHA is virulently opposed, and its members have whipped themselves into a frenzy of opposition, brandishing giant stickers and signs that read: “www.StopSunkistBuildingExpansion.com.” Close sees the anger as the seeds of the next great citizens’ revolt: the Neighborhood Integrity Initiative, the March ballot proposition (aka Measure S) that aims for a near-total shutdown of all sizable real estate development projects across the city for two years. His hope? To strike a blow against what he sees as a corrupt system. “City hall is controlled by municipal unions and developers,” says Close.

Opponents of the initiative (made up mostly of municipal unions and developers) describe NII as an economic Armageddon that would “drive up rents, throw thousands out of work, increase homelessness, and leave nowhere to build,” according to one press release. They also insist it will never pass. Close is not so sure. Proposition U, a slow-growth measure for which he was the spokesperson in the ’80s, passed overwhelmingly, and voters weren’t nearly as mad as they are these days. The initiative “may not be perfect,” he says, “but you’re going to send a strong message to all elected officials.”

The last time L.A.’s establishment got a strong message, according to Close, was in 2015. That was when the unknown David Ryu tapped into voter disgust with rampant development, going up against 13 other candidates to represent Council District 4, which includes Sherman Oaks, parts of Hollywood, and Hancock Park. (Along the way SOHA set up a meeting as if it were a speed-dating forum, with candidates hopping from table to table at five-minute intervals.) After the primary, Ryu faced a runoff against Carolyn Ramsay, the chief of staff to the retiring councilman Tom LaBonge. Ramsay received the bulk of endorsements, from labor and the political establishment. She didn’t go over so well with SOHA, though. The association doesn’t endorse candidates, but Close, a registered Democrat, made it clear through the meetings and newsletter that he was exasperated with the status quo.

Ryu is among the few pols in Close’s glow, and he is the featured speaker at the meeting this evening. As the 41-year-old former community health director approaches the stage in the cafeteria, Close bellows, “He was not supposed to win the primary; he was supposed to be gone. How many councilmen endorsed you?” Zero, responds Ryu. “How many developer dollars did you take?” None. “So how did you win?” Ryu gestures to the room. “Because of you.”

It’s the kind of stage management Close uses to keep his guests on notice. “Richard is the Yoda, the Jedi Master of Council District 4,” Ramsay tells me. “He controls the conversation with his blue newsletter. He feeds people when they come to meetings. How much is SOHA really representing the interests of all the people in Sherman Oaks? It’s impossible to answer that question.”

Some might find it ironic that Close, a man who is highly critical of those in power, has led SOHA almost as long as Castro led Cuba. He maintains that “no one else wants the job,” and it’s clear that the organization owes its heft to him. “Richard has built it into a force,” says Raphael Sonenshein, the director of the Pat Brown Institute for Public Affairs at Cal State Los Angeles. “Anyone who wants to make a mark in local politics should learn from him.”

Growing up around Boston, Close was exposed to the theatrics of politics by his father’s law partner, a Democratic congressman named Thomas Lane. On trips home from D.C., Lane would regularly attend funerals of people he’d never met. Close asked him why. “He said, ‘I do it for the widow,’ ” Close tells me, his Boston accent still thick. “ ‘For the rest of her life she can say, “My husband was an important person—a congressman came to his funeral.”

After graduating from Wharton, Close became a lawyer himself, moved to California in 1971, and settled in Sherman Oaks a few years later, where he and his wife would raise two kids. L.A.’s sprawling government soon hardened his already-deep cynicism about politicians. Most of them, says Close, “are seeking their next job, and that’s why they’re on the city council, because they can’t get a job in the private sector for $180,000.”

He joined SOHA in 1976; a year later he was running it. Around that time sleepy homeowners’ groups in places like Hancock Park and West L.A. were waking up, clamoring for more say in local affairs. Close thought his group could be more than just a squeaky wheel; it could lead popular revolt against a free-spending local government. Opportunity soon presented itself. At one meeting a representative from the county assessor’s office warned the crowd that property taxes were likely to triple. People were terrified.

A fellow by the name of Howard Jarvis had been hanging around SOHA meetings, trying to persuade people to sign a petition to stop the tax hikes. Close was skeptical of Jarvis’s bombast, but when his own efforts to lobby Sacramento and Governor Jerry Brown on property taxes proved a bust, he went all in with the Republican. Close used his SOHA base to start a group called Californians for Prop. 13. “We had people who would sit in front of supermarkets collecting signatures when it was 90 degrees out in the Valley,” he recalls. Many of them were seniors and couldn’t afford the tax increase. “It was tax reform or sell your house.”

Proposition 13 passed, of course, capping property taxes while leaving a decades-long trail of shrunken budgets for education and other public services. The victory energized Close, who has remained assiduously nonpartisan. So long as a pol is willing to support him on his issues, he is willing to play to their vanity. “Politicians need grass roots,” he says. “I’m grass roots. I know a lot of people. The key is to make the elected official look good. That’s how you accomplish your goal.”

Not that he always wins. Close has long complained that city hall overtaxes the San Fernando Valley and shortchanges it on services. (“What does the councilman from San Pedro know or care about Granada Hills, or Chatsworth, or Sherman Oaks?”) He fought for years to get the Valley secession measure on the ballot, but when he finally succeeded, in 2002, voters in the rest of the city crushed it by a wide margin. SOHA also opposed transportation-boosting Measure M, arguing that the Valley wouldn’t get its fair share of Metro dollars. Voters overwhelmingly backed M in November.

Jill Banks Barad says the only thing that keeps SOHA going is its “knee-jerk reaction” to anything having to do with development. She heads the Sherman Oaks Neighborhood Council, which was established after Los Angeles voters adopted a new city charter in 1999. The idea was that neighborhood councils would enable all citizens, not just homeowners, to connect with local government. Perhaps inevitably, tension over turf resulted. “When I look over the past few decades, I don’t remember anything they’ve ever been for,” says Barad. “People are just against what Richard Close tells them to be against. They always say they have all the power. I’m not sure how much they actually have.”

Matt Epstein, a realtor and 21-year SOHA board member, dismisses Barad’s criticism. “I think there is some jealousy there,” he says. “Our meetings are a lot larger.”

Ryu didn’t know much about SOHA when he jumped into the race, but when he knocked on doors, people would tell him, “I’ll see you at the SOHA meeting.” Speaking to the packed room at Notre Dame High, the city’s first Korean American councilman talks about the “Stop Sunkist Now” movement. Many in the audience wave the campaign’s bright yellow stickers. “See all these yellow stickers?” Close asks. “What are you going to do for us?” Ryu tries to reassure the crowd but doesn’t pretend that he alone can halt the project. “There might have to be compromises,” he says.

Compromise isn’t what voters are looking for right now, if you ask Close. He says he didn’t vote for Donald Trump but sees the positive in his victory. “It tells me that the public is frustrated, mad, and believes that any change is better than the status quo. That’s the perfect ingredient for the Valley becoming a separate city or for the enactment of the Neighborhood Integrity Initiative in March.” He pauses. “The public is mad, and they want change.”