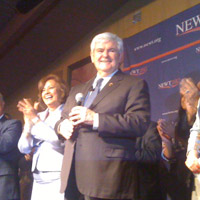 The event, billed as a meet-and-greet with Gingrich, was hosted by the Statewide Hispanic Coalition and kicked off what Gingrich described as his fight for California. About 200 people were expected to attend.

In a twenty-minute-long speech, Gingrich detailed his positions on oil (we should be drilling for it in the U.S.), core values (the Obama administration has declared “war” on the Catholic church), welfare (if you sign up for unemployment, you should have to complete a business training program so that we “don’t give people money for 99 weeks for doing nothing”), and his tax plan (“it’s called a tax cut!”).

He got laughs with a few swipes at Obama and cheers for promising “paychecks and $2 per gallon gasoline” and imagining a world in which “no American president bows ever again to a Saudi King.” All the while, Statewide Hispanic Coalition chairwoman Teresa Hernandez stood by his side, smiling and clapping with the crowd.

We asked Hernandez, who also owns Cielito Lindo with her husband, Jose, why Newt is her candidate.

What about Newt’s message and campaign resonates with you?
A lot of the candidates—Mitt Romney, Rick Santorum—have a message that I like, which is smaller government and pro-business. But I’m looking at what Newt’s already accomplished. He worked with a Democratic president, and I feel so frustrated that between Obama and Boehner nothing has gotten done. Newt was able to pass the greatest welfare reform legislation we’ve ever had and unemployment was at like 4.2%. He got so much accomplished with a Democratic president. I’m not saying he did it all by himself, but he and a Democrat got unemployment down, got welfare reform, and was able to do all of that in his term. That’s what impressed me.

It sounds like you’re not too focused on the social issues that have been Republican Party talking points lately.
I think the Republican campaign focuses on social issues. Once the general campaign happens, social issues won’t matter as much. Nobody cares about the economy right now. I’m pro-life, but if there were somebody who could turn our country around that was pro-choice, that wouldn’t mean I’m not going to vote for them.

Newt has made comments during his campaign that some considered to be racially insensitive towards Hispanics. How has he kept your support?
Newt is the only one to me that understands how the immigration system has to be reformed little by little. It’s such a huge, antiquated mess. He knows H1 and H2 visas need to get fixed, he knows that we need a guest worker program, that we need to match workers across the border with the service industry here. He’s very sensitive. He gets it. Our kids are not going to go pick grapes—it’s just not going to happen.

So his comment about Spanish being the language of the ghetto didn’t offend you—
No! I have four kids. They need to go and get jobs. I don’t care if it’s minimum wage, if it’s cutting lawns. They need to do that. And I think it’s so sad that we’re saying those jobs are below our kids. His message resonated with me.

The Latino vote could be pivotal this year. What do you think Newt should or can do to capture it?
He needs to stay on message. California is 37% Hispanic and who has been hurt tremendously in this economy is Hispanics. If he can stay on target with the economy and jobs, that’s what will get the Hispanic population. He’s got a great education program, that’s key to Hispanics. And also, on immigration, how he feels we need to reform the system and have a common sense way to match workers across the border with employers here, and people who are already here—like he said, we’re not going to get a bus and round up 12 million people in the United States and people that have been here their whole life. There needs to be a civil discourse about how to reform the system.

Mitt Romney and Rick Santorum have each won four contests so far. Should Newt continue to drop in the polls or ultimately leave the race, which candidate will the Statewide Hispanic Coalition support?
Well, we’ll support the Republican nominee. Except Ron Paul. He’s crazy. But I don’t really want to talk about that until after Super Tuesday.