Home News & Politics If a Dem Needs to Run in the Newsom Recall, Keep an... 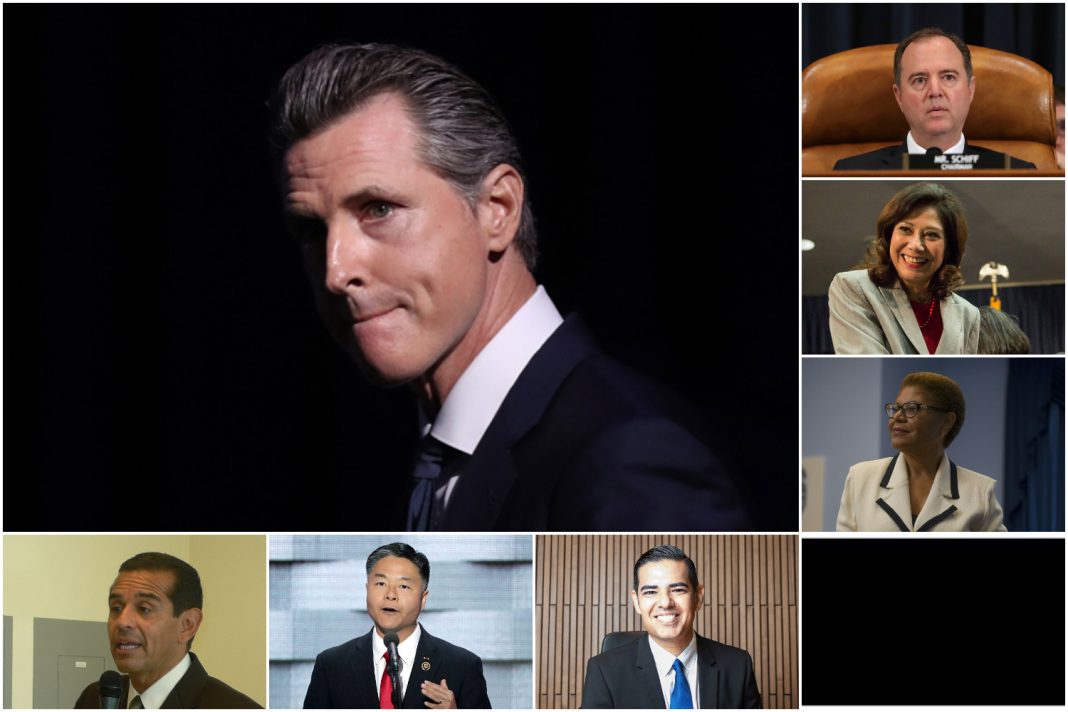 With a recall election for Governor Gavin Newsom now official, and likely coming in the fall, gubernatorial dreamers are climbing out of the political woodwork. Most are being roundly dismissed: Republican businessman John Cox, who got walloped when he ran against Newsom in 2018, doesn’t scare anyone in a deep blue state; Caitlyn Jenner has name ID but nothing on her resume to make people think she could run California; and former porn actress Mary Carey and the pinktastic Angelyne, who both appeared on the ballot to replace then-Governor Gray Davis in the 2003 recall election, seem to be on branding missions. Ex-San Diego Mayor Kevin Faulconer may have the greatest potential, but again, there’s that Republican-in-California mountain to scale.

So far, no name-brand Democrats are in the mix. This is intentional: the party’s playbook is to unify behind the first-term governor and persuade Californians to reject the recall. If enough people support Newsom, the second item on the ballot, about picking his replacement, never comes into play.

Still, uncertainty bubbles. Newsom’s November French Laundry dinner with a lobbyist was one of the biggest political face plants of the past year. It’s the kind of gaffe that makes people wonder if he could pull something else that alienates voters.

If some sort of French Laundry II comes to pass, and state party bosses decide they need a last-minute savior, then a number of Southern California politicians might have a shot. Here is a (not exhaustive) rundown of viable local players.

To be clear, Bass, like most people on this list, has shown zero interest in getting on the ballot. That said, the six-term Congressional rep probably has the highest break-glass-in-case-of-emergency potential.

The former physician’s assistant who later founded the South L.A. justice nonprofit the Community Coalition rocketed into the national mindset last year when she emerged as a potential Joe Biden running mate. The momentum continued when she was widely discussed as someone Newsom could tap to fill Vice President Kamala Harris’s former U.S. Senate seat.

Although Alex Padilla got the Senate gig, Bass’s star was hardly diminished. Her time in the spotlight generated effusive praise across the spectrum for her intelligence and political savvy, and she is tight with powerbrokers such as House Speaker Nancy Pelosi. Bass’s experience, which includes chairing the Congressional Black Caucus and, before that, serving as Speaker of the state Assembly, makes her easy to unite behind.

The Burbank-based congressman, now in his 11th term, saw his profile skyrocket when he played a lead role in the (first) impeachment proceedings of President Donald Trump. That elevated him into California’s version of a Cheers politician—everyone knows his name, and in a short recall election, name ID is key. Schiff’s chairing the House Intelligence Committee adds heft, but he has an even-greater potential ballot boost: a superhuman ability to fundraise, which could provide him the cash to cover TV ads up and down the state. While being a 60-year-old white man may have posed a challenge to Newsom appointing him to fill Harris’s seat at a time when racial justice and representation matter more than ever, that might hold less sway in a statewide election, particularly if it means keeping a Democrat in the governor’s mansion.

Yet another Los Angeles-area Congressional rep, Lieu spent nine years in the state legislature, and in 2014 won the House seat held for 40 years by political lion Henry Waxman. Lieu has been active on popular state issues such as climate change and fighting discrimination against the LGBTQ community, and his rapier-like wit has made him something of a star on Twitter (sample post from Wednesday: “The arc of Rudy Giuliani’s career is long, but it bends away from justice”). Additionally, Lieu is a U.S. Air Force veteran and the whip of the Congressional Asian Pacific American Caucus. During the Trump era he became a Republican foil—he famously once told Congressman Devin Nunes to “shove it”—which would play to his benefit were he the most prominent Democrat on the ballot.

The arc of Rudy Giuliani’s career is long, but it bends away from justice. https://t.co/bA9FU6PVNw

It may seem a jump to go from L.A. County Supervisor to governor of California, but Solis packs plenty of experience, connections and friends in high places. After all, she spent eight years in Congress, and then was Secretary of Labor under President Barack Obama, a job that made her the first Latina to serve in a presidential Cabinet. She also has a story and legislative record that could resonate with statewide voters: She is the daughter of immigrants, is liked by labor unions, and has a record of pushing green energy and advocating for low-wage workers. Her name was also mentioned when Newsom was deciding whom to appoint to Harris’s Senate seat. It’s not hard to see Solis ascend if party leaders think she is the best chance to keep the seat, in part by appealing to a growing base of Latino voters.

Of all the names being bandied about, the former Los Angeles mayor may be the most likely to appear on the ballot. He is being discussed in political circles and his potential candidacy was the subject of a recent Los Angeles Times article. In addition to leading the city for eight years, he is a former speaker of the State Assembly. He has long help grand ambitions.

Villaraigosa is charismatic, has copious connections, and can boast of launching L.A.’s rail-building boom. That said, AnVil utterly tanked when he ran for governor against Newsom in 2018, garnering just 13 percent of the vote in the primary and not even sniffing the runoff. Sure, he would perform better if he didn’t have to compete against a Newsom-like Democratic rival, but his past performance has to give serious pause to anyone thinking of betting on his statewide appeal.

Garcia, the mayor of Long Beach since 2014, might not appear to be the most likely Hail Mary candidate, but his career is on the upswing. He earned accolades as Long Beach moved quicker than most California cities in getting coronavirus vaccines into the arms of residents, and in August, just weeks losing his mother and stepfather to COVID-19, Garcia was one of the people who delivered a keynote speech at the virtual Democratic National Convention. He would be California’s first gay governor. Also, Garcia has already displayed his higher ambitions: back in 2019, he filed a statement of intent to run for California lieutenant governor in 2026.