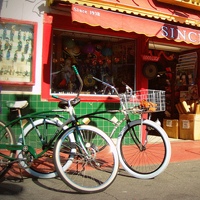 The L.A. County Board of Supervisors this week approved a new Bicycle Master Plan that calls for more than 800 miles of bicycle lanes to be created throughout unincorporated areas of the county.

The proposal, which KPCC reports Supervisor Zev Yaroslavsky called a work in progress, will cost an estimated $330 million over 20 years.

The plan’s approval is welcome news for the Los Angeles County Bicycle Coalition, an advocacy organization that has been pushing for safer conditions for cyclists for more than a decade, and comes just as rising gas prices make alternatives to driving increasingly attractive—and yes, as Los Angeles magazine’s Bike + Ride issue hits newsstands

We told you now is a good time to get rolling.