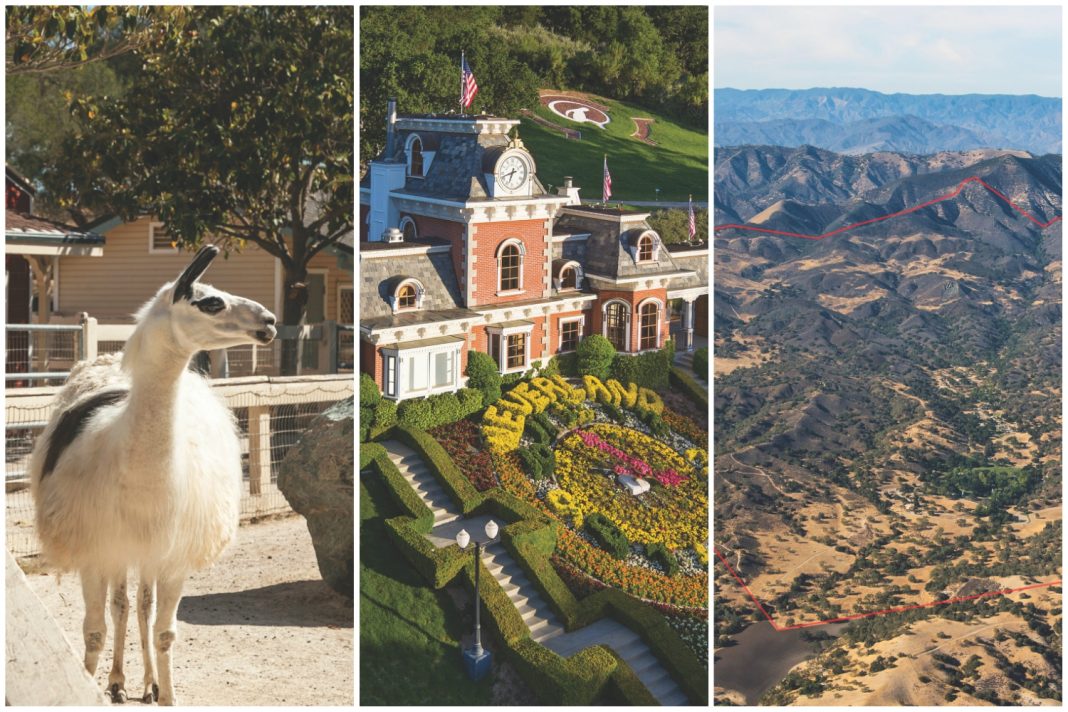 Looking for a nice spread near Santa Barbara? If you’re a horse-loving hedge-funder in search of a real estate bargain, say giddyup to Neverland Ranch. Michael Jackson’s 2,698-acre compound recently went back on the market for a paltry $31 million—a fraction of its original asking price. When the property first went up for sale in 2015, Neverland’s co-owners—the Jackson estate and investment firm Colony Capital—listed the property for a cool $100 million. Unable to find a buyer, they lowered the ask to $67 million. Now after a bruising few months for the late pop legend, the property (listed these days as “Sycamore Valley Ranch”) is priced to move.

“This TRULY is a once-in-a-lifetime opportunity to own one of Southern California’s most pristine ranches,” writes Suzanne Perkins, a specialist in high-end properties on the Central Coast and one of the lead agents repping the mansion. But while the land might be pristine, the property’s reputation is far from it. The new listing went live just days before HBO released its blockbuster documentary Leaving Neverland, in which two men allege that Jackson repeatedly molested them as children at the ranch. “[It’s] a tough sell,” admits Randall Bell, CEO of Landmark Research Group and an appraiser with a focus on infamous properties. “Michael Jackson brings a range of emotions. He’s associated with some very ugly crimes.”

Despite its notoriety, many of the estate’s grandest (and oddest) amenities have endured. Here’s a quick tour.

The 12,598-square-foot estate features six bedrooms, seven full bathrooms, and two half baths, all decorated in French-Normandy style. The cavernous, first-floor master suite, where Jackson slept, comes equipped with two full bathrooms and a private loft. “It’s a wonderful value,” says Coldwell Banker’s Joyce Rey, who listed the property in 2017. She gushes about the ranch’s long, winding drive, tennis pavilion, and luxe lakeside guesthouse where Elizabeth Taylor regularly stayed. Rey is hopeful that the documentary won’t affect the sale. “There aren’t many properties like it,” she says cheerily. Bell is less sure. “The whole place is designed around Michael Jackson’s tastes, which were somewhat unconventional,” says the appraiser, who also worked on the Brentwood home where Nicole Brown Simpson was killed. “It’s going to take a special kind of buyer.”

A Ferris wheel, carousel, and other amusement rides that once dotted the property have been removed, but the Disney-esque train station, constructed in 1994, is still there. A much-photographed flower mosaic in front of the station features blooms that spell out “Neverland.” There’s also a billiards room, movie theater, and multiple hot tubs to occupy your time. “The entertainment options provide a sophisticated country retreat,” Perkins says.

The foliage-filled Los Olivos property spreads out over 2,700 acres and includes three guesthouses, a pool and pool house, a tennis court, and a four-acre lake with a waterfall. “If you didn’t know better, you’d think you were in the Serengeti,” says Jeff Hyland, an agent with Hilton & Hyland. He says he recently showed the ranch to a potential buyer—a single, 50-something Beverly Hills man who works in fashion—and the guy is mulling it over. “He’s very interested.” Hyland, one of the ranch’s listing agents in 2015, agreed the timing of the documentary was not ideal, but he thinks the scandal will fade away quickly. “It’s yesterday’s news,” he says.

Originally built in 1982, Jackson bought the ranch for $19.5 million in 1987 and spent millions turning it into a private amusement park and zoo. In its heyday it housed giraffes, two orangutans, and his estranged pet chimp, Bubbles. The animals were put out to pasture a few years ago, but a massive barn and various enclosures are still in good shape. “Having sold many of the largest ranches in Santa Barbara County, I can easily say that this is one of the more spectacular,” Perkins says

Is Santa Barbara County What People Think About When They Dream of California?