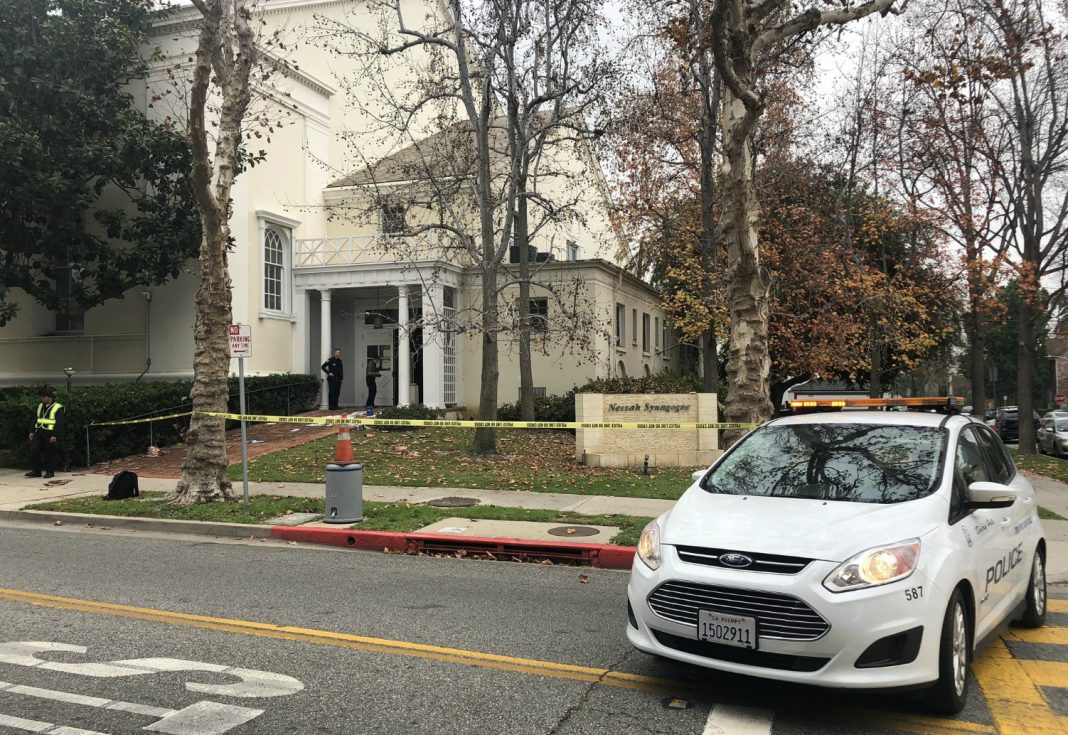 Last Saturday, shortly after 6 a.m., a congregant of Nessah Synagogue made his way through Beverly Hills on his morning bike ride. But his routine ended when he caught sight of his place of worship. On Rexford Drive, he saw the doors of the Iranian Jewish temple open and trash cans upended, their contents spilled out onto the ground. He went inside and found a scene from another era: chairs and furniture toppled over, prayer shawls and yarmulkes strewn about, and Torah scrolls unfurled across the floor like toilet paper. On the wall, drawn in the white chalky residue of a fire extinguisher: two hearts. While they weren’t the symbols he might have expected, amidst a wave of other anti-semitic incidents across the country, the message seemed clear.

Nessah Synagogue represents an important landmark for Iranian Jews, scores of whom settled in Los Angeles following the 1979 Iranian Revolution. The Greek Revival-style building in Beverly Hills has operated as a synagogue since 2002, coming to serve as a community center for Persian Jews across the city. When news of the desecration spread on Saturday, it galvanized not just Iranian Jews, but the Jewish community at large.

The attack on the temple came only three days after four people were killed in a mass shooting at a kosher grocery store in Jersey City, New Jersey. This week, graffiti described as anti-semitic was found at three schools in Los Angeles, including the phrase “Time to pay,” according to LAist. A report by L.A. County’s Commission on Human Relations found that 72 percent of religiously motivated hate crimes in L.A. targeted the Jewish community.

In the days after the vandalism, a town hall was organized by the Israeli-American Civic Action Network (ICAN), a nonprofit that advocates on behalf of Israeli-Americans. The event was attended by city officials, community members, and law enforcement. Beverly Hills Police Chief Sandra Spagnoli came as well to give updates on the investigation. Unexpectedly, standing before a packed room of nearly 400, she announced that a suspect had been arrested. The room rose to its feet in applause.

The incident had launched a five-day, interstate manhunt that led two detectives and two sergeants of the Beverly Hills Police Department from Los Angeles to a pier in Kona, Hawaii. There, Wednesday afternoon, Hawaii County Police Department officers arrested the primary suspect, 24-year-old Anton Nathaniel Redding of Millersville, Pennsylvania. He has been charged with vandalism of a religious property and commercial burglary, with a penalty enhancement for a hate crime.

“Now that we know this person responsible for this crime is in police custody, we really can begin the first steps in the healing process together as a community,” Chief Spagnoli said as the clapping subsided.

While she didn’t discuss motive, Spagnoli laid out the process of identifying and apprehending Redding. She said security cameras in the synagogue recorded Redding forcing his way into the building around 2 a.m. on Saturday morning, wearing a backpack and, curiously, pulling a rolling suitcase behind him. In the process he left behind fingerprints and other forensic evidence that place him at the scene, Spagnoli says. Early in the investigation, police detained another man who matched the suspect’s physical description, but released him after ruling him out with DNA evidence.

The first break in the case came with the help of Beverly Hills’ growing Closed Circuit Television (CCTV) network. Charting a path through the city’s nearly 1,200 cameras, police were able to follow the suspect from the synagogue to Wilshire Boulevard, less than a block north, where he got into a taxi. After tracking down the cab company, the department was able to get the alleged suspect’s name.

“We can’t just watch it for fun,” Spagnoli says of the CCTV. She admits that the department does not submit to any judicial oversight in its use of the system. “Hopefully we won’t get to that place because [CCTV] has been really a priority to make our city safer and it has solved so many crimes.”

Spagnoli says that the police department and the city plan on expanding Beverly Hills’ CCTV program.

In addition to the taxi passenger’s name, police were able to uncover his destination: Los Angeles International Airport. Then, in coordination with the Secret Service and airlines, they determined that he flew to Hawaii. Armed with an extraditable arrest warrant, a team of four officers booked the first flight to the island.

Redding is currently detained at the Kona Police Station. In court Thursday, Redding waived his right to an extradition hearing. His bail was set at $250,000, and he will be transported to California in the coming days.

When asked by Judge Melvin H. Fujino if he had consumed any medication, drugs, or alcohol within 24 hours of the hearing, Redding answered that he had.

“When I was picked up yesterday, probably three hours before that I had three shots of Fireball,” he said, according to West Hawaii Today.

Hours after Redding’s name appeared in a Beverly Hills Police Department press release, a Facebook user from Pennsylvania with the same name began receiving a torrent of angry comments on his photos. Multiple people who know the owner of the Facebook page confirmed for Los Angeles that, based on a mug shot and security footage released by police, the profile belongs to the man arrested in Hawaii.

To those who know him, Redding can come off as slightly narcissistic at times and very personable at others. Everyone who knows him, though, finds it hard to see him as anti-semitic.

“Anton Redding is a good kid,” says Alyssa Maurer, a photographer who knows Redding from time he spent in Pittsburgh. Redding himself practiced photography while working various service jobs over the years. He traveled in liberal circles and was very open as a gay man.

“[He] would never commit a crime that devalues the beliefs of others,” she says.

“The guy is a bit of a jackass, but he’s never pegged me as a Nazi,” says a former boyfriend.

According to his Facebook page and those who know him, Redding was born in Russia and adopted into an American family living in Lancaster County, Pennsylvania. Friends say that Redding became estranged from his parents because of his sexuality and he developed a substance abuse issue.

Redding appears as the subject in much of his own photography, posing amongst the abandoned detritus of Rust Belt Pennsylvania—empty homes, yellowed trailers, overgrown greenhouses. He often talked about traveling west and becoming a model. But whether or not he followed through, no one knows. He seemed to fall off the map sometime in 2018.

During the few days Redding spent in Hawaii, he managed to draw the attention of law enforcement for something unrelated. According to the Hawaii Tribune-Herald, Redding was arrested on Monday for trespassing and being in a restricted area at the Honolulu International Airport. He went before a judge that same day where he was charged a $50 fine.

Even with the “who,” the unanswered “why” continues to hang over those impacted by the incident. A spokesperson for the Beverly Hills Police Department says officers are still investigating a possible motive.

Nessah Synagogue held a day of fasting on Thursday to honor the destroyed Torah scrolls. “[I]t is no small thing for a Jew, for a rabbi, to witness a synagogue and a Torah scroll so blatantly desecrated,” writes Rabbi Adam Kligfeld, who joined the synagogue in fasting.

And yet, he writes, “these are times to avoid snap-judgments and promulgations. For sober thinking to win out over hysteria.”

“We should withhold judgment until more is known.”

RELATED: A YouTuber Was Shot in the Leg Outside an L.A. Synagogue

Crimes Against the Homeless Have Risen, and Advocates Are Searching for Answers