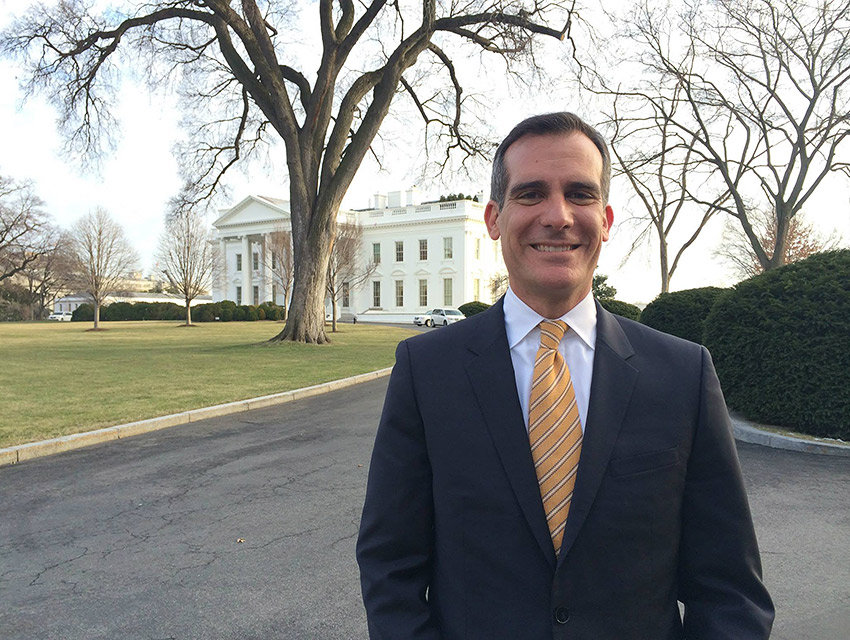 The 2014 C40 Climate Week is underway in NYC, and mayor Eric Garcetti has made his way east to participate in the festivities and announce a new climate initiative at the 2014 Clinton Global Initiative (CGI) Annual Meeting: The Mayors National Climate Action Agenda. The plan was introduced today by mayors Garcetti, Annise Parker (Houston), and Michael Nutter (Philadelphia), the leaders of the largest cities on president Obama’s Task Force on Climate Preparedness and Resilience, which was created in November of 2013.

Garcetti, Parker, and Nutter hope to impact climate change nationally by starting on the local level. Their multi-pronged approach calls for annual or bi-annual reports on participating cities’ greenhouse gas emissions and will put into use a community climate action plan, among other tactics. In leading by example, the three mayors hope that other cities across the country will adopt the Agenda as well.

“Our cities are on the front lines of the impacts of climate change, with 70% of emissions in the US from cities,” Garcetti said in a statement. “Mayors must confront this challenge not only at the local level, but also by calling for binding emission reductions at the federal and global level. I look forward to working with Mayors Parker and Nutter to galvanize our fellow mayors across the nation to join us.”

During his short tenure, Garcetti has demonstrated his tendency to dream big and take on marquee issues—sheltering 52,000 detained immigrant minors, announcing his plan to secure 10,000 summer jobs for L.A. youth, increasing the minimum wage—and the Mayors National Climate Action Agenda is no different. The three mayors are planning to tackle climate change by sidestepping Washington, a strategy strangely endorsed by Obama himself. In an interview with KPCC last year, Garcetti quoted the president, who said, “Don’t wait for Washington to take action if you’re a mayor or a governor.”