Home Urban Development Ever Noticed Those Mysterious Metal Circles Embedded in the Streets of L.A.? 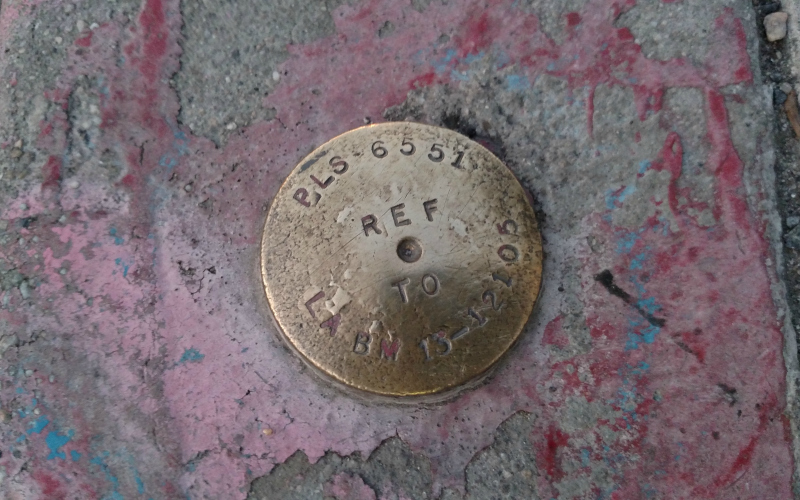 If you’ve ever glanced down at your feet while shuffling around the city and noticed an odd, gold circle planted in the ground engraved with an indecipherable code of letters and numbers, you’ve probably assumed that it was left there by an extraterrestrial crew who swung through to plant spaceship landing coordinates for the coming invasion, right? While that is the most intuitive guess, it turns out that may not actually be the case.

The disks, made of brass or bronze, are survey markers. We reached out to the CalTrans Division of Right of Ways and Land Surveys Chief for District Seven, Ralph Ricketson, for an explanation. He told us, “Survey control monuments are used as a basis for collecting survey information for our design engineers, such as for creating a topographic map, and for setting stakes that define the location of various civil engineering structures for construction, such as bridges, roadways, and drainage systems.”

Markers are engraved with alphanumeric codes that tell anybody who looks at them the specific street, post mile number, type of structure (be it a bridge, sidewalk, etc), year it was placed, and which government body left it at the site. The divot bored in the middle is the actual point that surveyors use for their measuring instruments. Different regional agencies across the country have their own markers, and there’s even a special plaque designed just for Disneyland (of course).

“Each monument is stamped with its own unique identifying marks. There would be data in our records center that would tell you the project, map reference, and specific information on that monument such as a horizontal position value (latitude and longitude), an elevation in relation to sea level or a specific vertical datum, as well as the name of the surveyor who set the monument,” Ricketson added.

So, to put Ricketson on the spot, we showed him this marker and asked him to decode it for us.

Here’s what he said:

Let’s decode the stampings on the brass disk in three steps. Step one: The brass disk in the photograph has “P.L.S. 6551” stamped on it.  The letters “P.L.S.” stand for Professional Land Surveyor, and the numbers “6551” is the registration number of the surveyor who set the monument. With this information, you can go to the license look-up section of the California Board for Professional Engineers, Land Surveyors, and Geologists Board website. Entering the numbers “6551” in the look-up page reveals that the monument was set by Jay Kay Seymour from Redondo Beach  The address shown is either the surveyor’s home address or their work address that is on file with the Board. Step two: The stampings “REF TO” would indicate that this monument is a reference or accessory mark to a primary monument located somewhere in the immediate vicinity. As it can be very costly and time-consuming to set some monuments, and sometimes depending on their degree of importance, accessory marks are set to be able to easily replace the primary monument if it is damaged or destroyed (by construction, vandalism, or natural causes, as examples). Step three: The “REF TO” stamping is “referencing to” the “LA BM 13-12105” stamping, which is a reference to a City of Los Angeles (LA) Benchmark (BM) file # 13-12105. Benchmarks are monuments or marks that establish a vertical elevation in relation to sea level.  The number 13-12105 refers to a survey record or document such as a field book, file, or database, that will provide you with all the information about the benchmark.”

Once you know what you’re looking at, you can actually use the markers as a way to navigate around, useful especially since the same markers are also left in remote and rural areas. Scouts and wilderness survival types often use the markers in training for compass or GPS orienteering.

Or at least that’s what the government wants us to believe.

RELATED: Ask Chris: Why Are L.A. Street Signs Blue? Were They Always?

Does DTLA Need Another Freeway Off-Ramp?