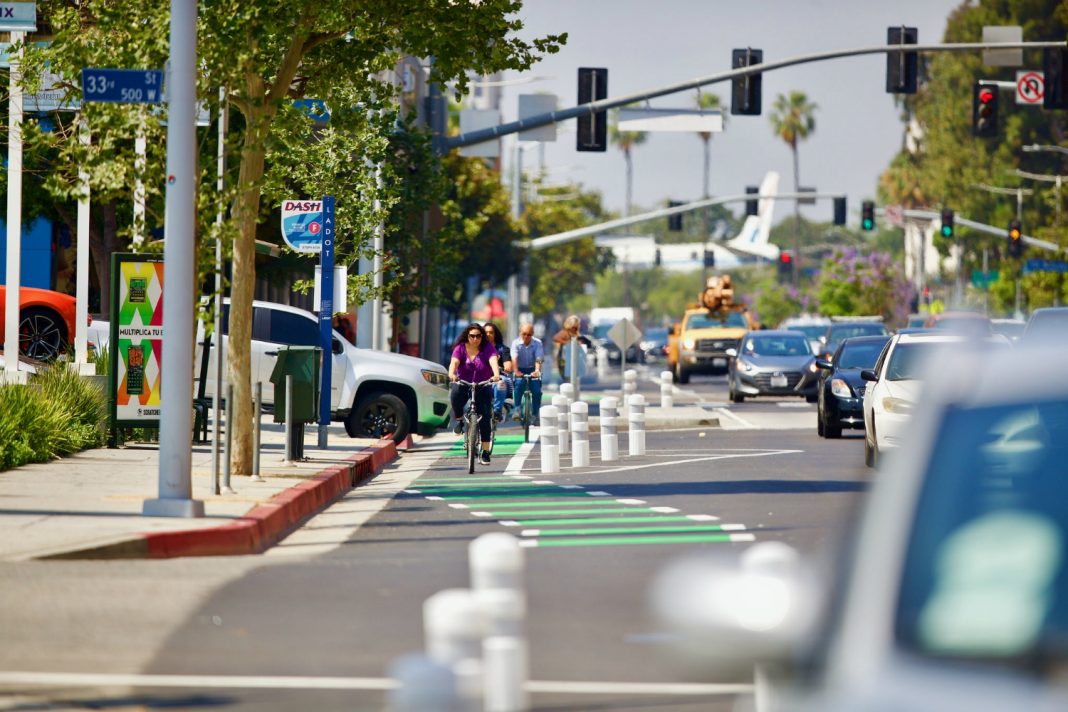 Crawling along at a glacial pace in L.A. traffic is never fun. But it’s especially not-fun when the event you’re about to be late to is the opening of a new bike lane.

I’m on my way to a media preview of the soon-to-be-completed Figueroa Corridor Streetscape project—also known, in an effort to make city infrastructure sound cuddlier, as MyFigueroa. (“Let’s Fig it out,” its website cheerfully offers.) When officially unveiled next Thursday, August 30, the completed project will feature improved street signs and signals, new bus stops, better crosswalks, and its key element, a brand-new, three-mile bikeway running from Martin Luther King Jr. Boulevard to 7th Street, with a two-mile protected stretch between USC and the Convention Center.

The L.A. Department of Transportation is giving select members of the media a tour of the protected bike lane, and that’s where I’m headed now—assuming I eventually get there. The tangle of cars on the 110 is moving more slowly than the Mueller investigation, and I’m furious at both the traffic gods and at myself for not just, you know, biking there.

In a city as congested as L.A., bike lanes present something of a paradox. On the one hand, they offer a potential solution to our constant gridlock—bike lanes make it easier and safer to get around on two wheels, and if more people did, there would be fewer cars jockeying for pole position at every on-ramp and intersection. On the other hand, putting in a bike lane often requires removing a traffic lane—which, until fewer people drive cars, means more congestion.

Or does it? Once I finally get off the 110 and head south on Figueroa, following the route where the protected bike lane has already been installed, I’m struck by how well the traffic is moving. This stretch of Figueroa is wide enough to accommodate two lanes of traffic in each direction, plus parked cars, the protected bike lanes, and a center turn lane. At 10 a.m. on a Thursday, it’s busy but uncongested. I’m still late, but at least I’m no longer inching along.

I’m met at a Metro Bike Share station near USC by LADOT spokesman Oliver Hou, who used to ride this corridor all the time when he was a student at USC. Back then there was no bike lane, so underneath Hou’s calm, bespectacled demeanor, he’s clearly a total adrenaline fiend.

He gestures at the wide boulevard, on which cars and buses zip past us at what feels like freeway speeds. “Before the installation of the bike lane, how would you have felt riding this?” he asks. No one in our small group of journalists responds, but the correct answer is clearly, “Not great.” Before the MyFigueroa project narrowed it, some northbound stretches of Figueroa here were four lanes wide—an excessive and unsafe width for a surface street that was apparently put in mainly to accommodation post-game traffic from the nearby L.A. Coliseum.

For the next hour, Hou and his colleague, Tim Fremaux—a senior transportation engineer who helped design the MyFigueroa project—lead us on a two-wheeled tour of the new bike lane, pointing out several features that are relatively new to L.A. cycling infrastructure. The entire “protected” stretch of the lane is separated from car traffic by a combination of pavement, parked cars, and bollards, which are those knee-height white poles you see along some bike lanes (who knew?). At several intersections, there are “left turn boxes,” green-painted waiting areas just to the side of the bike lane which cyclists can use without having to cut across two lanes of traffic to get to the regular left turn lane. Coolest of all, there are separate traffic lights designated just for bikes, all of which are synchronized with “no right turn” lights for cars. Any rider can tell you that dodging right-turning cars is one of the diciest parts of urban cycling, so these lights are a godsend.

As we ride, Hou waxes poetic about LADOT’s efforts to make L.A.’s streets safer for bikes and pedestrians and less like an urban version of a Mad Max movie. “We have streets that are sort of like our canvas,” he says, somehow managing not to break a sweat while riding in black slacks and a blue polo shirt. “We’re able to reconfigure them in any way that’s needed for the community.”

As we get closer to the Convention Center, some of the challenges LADOT faces in implementing projects like MyFigueroa become more apparent. At the 23rd Street intersection, work crews are still scrambling to install the new bike traffic lights; because the intersection sits atop the 110 freeway, they had to get clearance from the Caltrans before making changes to it. North of Pico, one block remains without a northbound bike lane because construction of a new high-rise has buried a lane of pavement under scaffolds and plywood fencing. “This is one of the challenges in working in downtown right now,” Hou acknowledges. “These projects that we weren’t anticipating when we started.”

It’s hard to fault LADOT for such gaps in its cycling routes—at least here in downtown, where an orgy of construction has disrupted traffic for all vehicles. (Elsewhere in L.A., where bike lanes often end abruptly at major intersections for no discernible reason, it’s less forgivable.) But these gaps are crucial, especially if the city is serious about encouraging cyclists to use a street as heavily trafficked as Figueroa. A shiny new three-mile bike lane is great, but in a city where the average commute is 8.8 miles, what’s needed is a fully functioning network of bikeways—and as a key artery in that network, Figueroa isn’t quite there yet. Although Fremaux assured me that north of 12th Street, an unprotected bike lane “goes north all the way to Cesar Chavez,” that seems like an awfully optimistic definition of “bike lane”; in reality, the lane disappears several times in a maze of construction and right-of-ways for buses and right turners.

MyFigueroa faces other challenges, as well—human nature being the biggest one. Put up all the signs you want—“no parking,” “no turn on red,” “left turn must use turn box” (good luck with that last one, LADOT)—a certain percentage of people will still do whatever they damn well please.

Riding the length of the Figueroa Corridor bike lanes in both directions, I counted at least five cars, plus a very large dump truck, parked in the bike lanes. (Two were in front of a Chipotle, which seems par for the course.) And I lost track of how many cyclists I saw riding the wrong way, on the sidewalk, or darting out into traffic to pass our admittedly slow-moving group. Also, everyone still seems confused by the bike traffic lights, which for all their awesomeness don’t always activate when you expect them to. “It’s an education thing,” Hou admits, noting that Figueroa is only L.A.’s second street—Los Angeles Street is the other—to get bike lights.

Still, I was impressed with how pleasant it was to bike along a stretch of street that, a year ago, I would have avoided at all costs—and I say that as someone who’s bike commuted to four different jobs in three different cities. The team at LADOT has managed to tame one of L.A.’s scariest streets in a way that makes city cycling look almost fun. I even overheard a USC student eyeing the lane and saying to her friends, “Hey, maybe if our schedules match up, we can ride to class together.” Or to USC football games? An urban planner can dream.

RELATED: A Driver’s Guide to Not Being a Jerk to Cyclists