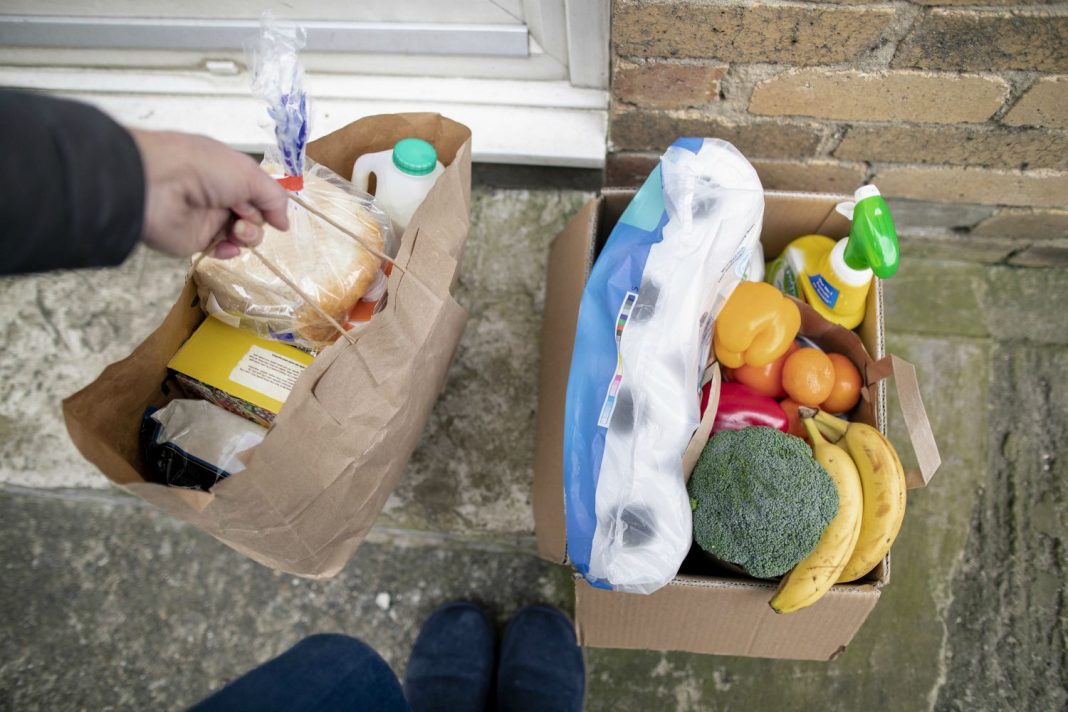 As the COVID-19 crisis stretches nonprofits and public service providers to their limits, a number of informal, hyper-local “mutual aid” groups have been cropping up throughout Los Angeles to fill in the gaps for the region’s most vulnerable residents.

Often organized through Google Docs, online spreadsheets, and Facebook groups that are circulated online, these grassroots, community-run networks are pairing Angelenos who have needs with willing volunteers across the city, and are helping to provide services like grocery drop offs, childcare, financial assistance, and more.

Shirin Senegal, a community organizer in Long Beach, says she created the Coronavirus Long Beach Community Support Group on Facebook not long after experiencing her own COVID-19 scare. One of the first people tested for the virus at St. Mary Medical Center, Senegal was ultimately found to have a different respiratory ailment. But she emerged from her weeklong quarantine eager to help others who had been impacted. “I started a Google Doc form that basically asked, ‘What are your needs?’ and ‘What can you pay forward?,’” says Senegal.

After learning that some local food banks had recently shuttered, and others were short on donations and volunteers, she immediately enlisted a team of neighbors to collect food for those who needed it. “The neighborhood associations got behind us on it, and we took donations from people and cleaned them up, packaged them, and delivered them,” says Senegal. “You just have to hit the pavement.”

Since then, the Long Beach group has grown to more than 700 members, and volunteers have been scrambling to drop off groceries for seniors and immunocompromised residents, make and distribute homemade hand sanitizers and face masks, and provide guidance to small businesses. They’ve also launched a website to help direct locals toward resources and information.

Senegal says seeing her community come together has been a beacon of positivity during a dark time. “Every day I’m touched, I’m emotional, I’m so grateful,” she says. “Because I see so much unity, and so much love, and so much giving.”

The Los Angeles COVID-19 Mutual Aid Network, a collaboration between the grassroots group Ground Game L.A. and several other L.A.-based community organizations, was also launched last month in response to the crisis. Steve Ducey, an organizer for Ground Game L.A., says he was “blown away” by the amount of support it immediately received.

“Hundreds of people filled out the form the day it launched,” he says. “The vast majority of those folks were people who were offering services and help, and some folks were in both camps where they needed something and they also were willing to provide assistance to somebody. So that was really awesome for us to see.”

Ducey says that in addition to sending out volunteers to deliver groceries, the group has been using money from its GoFundMe to provide cash assistance to people who are unable to afford food or rent right now. In the coming weeks, they plan to expand to provide other community support services as well, like running errands, dog walking, childcare, caregiving, first line medical training and response, and mental health support.

Ducey says the group is encouraging Angelenos to develop hyper-local neighborhood “pods” so that they can more easily check in with their communities. “We have folks throughout the city who are trying to build relationships with people in their building or on their block, in order to determine what resources are directly available in their community, and how can they help each other meet each other’s needs,” he says.

@MutualaidLA has been in existence for 19 days, here’s what we’ve been able to do for our unhoused siblings in LA thus far :
Residents housed – 4
Residents provided temporary shelter – 26
Meals served – 194
Residents served – 243
Hygiene kits distributed – 192 pic.twitter.com/aUzMZFOX9B

Mutual aid groups are not a new phenomenon. Some of the earliest mutual aid groups—such as the Free African Society and Mexican-American sociedades mutualistas—were formed by groups who lacked access to mainstream services and were forced to rely on each other for support.

Miranda Sheffield, an organizer for the Pomona Mutual Aid Network who is also running for Pomona City Council, says that in addition to providing essential services and supplies, members of her group are working to foster a deeper understanding in the community about the history and meaning of mutual aid.

“We really want to emphasize that this is about solidarity, not charity,” says Sheffield. “So we’re putting together online political education about what mutual aid represents, the historical significance of it, and how has it actually been about indigenous, queer, trans, and Black folks using this as a way of survival, when they can’t depend on the state in order to get the support that they needed.”

As these mutual aid groups continue to play an essential role in the coming weeks, she hopes they’ll encourage people to rethink the ways they relate to their neighbors, and will have a lasting impact on communities even after the COVID-19 crisis wanes.

“There’s a local benefit when you’re able to show solidarity with folks in times like this,” says Sheffield. “If we did more to support our working class, and were more intentional about that, I think it would go a long way to move the pendulum in a different direction for how we live, and how we move towards a just economy, and a word that’s a world that’s about cooperation rather than exploitation.”

Being Immunocompromised During a Pandemic Was Scary Enough. Then Public Safety Became Politicized

The City Will Now Issue Pandemic Relief Funds for Artists