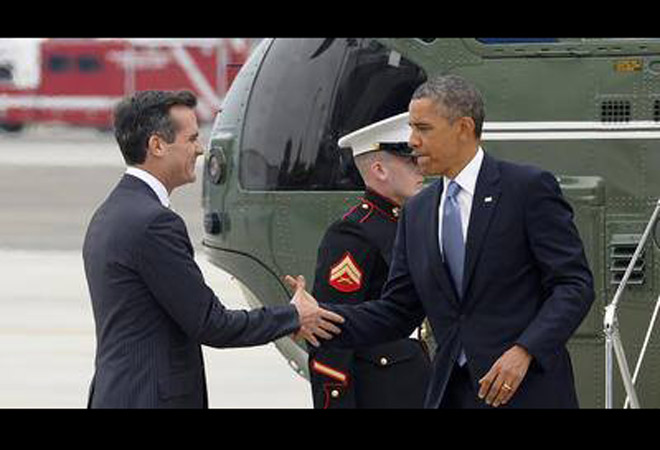 Mayor Garcetti has become quite the commuter: tonight he will leave on his third official trip to Washington DC on the occasion that Los Angeles has been designated a “Promise Zone,” meaning we are one of five communities across the country now eligible for significant federal aid (we’re talking tens of millions of dollars—up to $500 million over ten years, in fact). Tomorrow, he will meet with President Obama to discuss the initiative.

The program, newly minted under Obama’s administration, intends to provide federal grants and tax incentives to cities with pockets of poverty. In Los Angeles, the money will go toward reviving Pico-Union, Westlake, Koreatown, East Hollywood, and Hollywood. According to the White House, our funds might be used to increase affordable housing, invest in public transit and bike lanes, and create education opportunities through a partnership with the Los Angeles community College District.

“The mayor is very pleased, as he discussed this with the president during his visit to DC in October,” says Jeff Millman, mayoral spokesperson. “This is a huge priority for him and our administration, and being one of the first three cities to become a Promise Zone is a big win.”

While pulling together L.A.’s application for Promise Zone status, Garcetti called upon stakeholders from the business community (think Disney CEO Bob Iger) as well as leading non-profits and councilmembers to put their heads together for our petition. “It’s a good reflection of how he’s leading our city,” Millman says. “The collaborative effort came through in the application, and it was really attractive.”

The four other areas to receive the appointment are Philadelphia, San Antonio, southeastern Kentucky, and the Choctaw Nation of Oklahoma. If Obama’s 2013 State of the Union address is any indication, he plans to team up with at least 15 more towns in America over the course of the program.