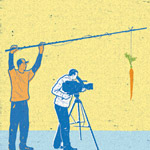 Last February, when Governor Arnold Schwarzenegger took out his pen to sign a $42 billion deficit-reduction package, he spoke of the long hours of debate and compromise as well as the sacrifices that Californians must make during these tough times. “Government has to live within its means,” he declared, referring to billions of dollars in budget cuts and billions of dollars in new taxes. What the governor left out of his remarks—and what merited only a two-line mention in an accompanying fact sheet—were the $500 million worth of tax credits that the state will hand over to movie and television producers who shoot in California. Described as part of an economic stimulus program, the measure caught supporters by surprise because so many earlier attempts had been killed by the state legislature (Humboldt County isn’t exactly keen on bailing out Hollywood). This latest effort got through only because it was packaged with other items and inserted at the last minute.

On the first day of the program, the state received 56 applications for the credits; by late October 50 productions had been approved, among them larger-scale shoots like Beverly Hills Chihuahua 2 and Naked Gun 4. “Ours is a reasonable program that makes us competitive while not going overboard,” says Amy Lemisch, director of the California Film Commission. “You want the numbers to pencil out. You want to be able to show that you’re generating more than you’re giving out.”

California, which refunds up to 25 percent of certain production costs, is late to the party. Dozens of states and countries have been providing financial sweeteners that can drastically reduce the cost of a film (penny-pinching independent filmmakers are especially attracted to the discounts). L.A. was getting desperate: For the first nine months of 2009, on-location shooting in the area fell more than 21 percent from the same period a year before. Feature films plummeted 37 percent. When a film or TV show gets made somewhere else, a local cameraman or makeup artist doesn’t work—and that has outraged the Industry’s rank and file. Even now there are gripes about the state not offering enough.

Of course we are talking about Hollywood, where mythmaking has always been second nature. In this instance, the fiction spun by city officials, union leaders, economists, and the media centers on how runaway production threatens to undercut L.A.’s dominance as the movie and TV capital of the world. It really doesn’t. Los Angeles has the biggest workforce in the entertainment business; produces the largest number of movies, TV shows, and commercials; and is home to more soundstages, back lots, postproduction houses, casting agencies, payroll firms, and honey wagons than anywhere else—and by a substantial margin. L.A.’s showbiz infrastructure is massive. It took decades to build and is almost impossible to re-create in another locale, with or without incentives.

For all the hand-wringing, the entertainment industry had 122,200 payroll jobs in Los Angeles County as of September. That’s more than the annual average of 120,000 jobs for the period between 1990 and 2008 (the monthly numbers tend to bounce around the 120,000 to 135,000 range). Those payroll figures do not include the tens of thousands of writers, actors, technicians, and other workers who operate on a contract or freelance basis—nor do they cover the thousands of businesses that service the Industry, from equipment rentals to flower arranging. When reporters glom on to the sharp drop in on-location shooting, they usually fail to mention the work that happens each day on soundstages and back lots—a big omission because more producers are opting for nonlocation shoots to save money (studios won’t release those figures). “California has never had 100 percent of production, just the lion’s share,” says Lisa Rawlins, former director of the California Film Commission and now a Warner Bros. executive.

Fears of runaway production go back at least half a century. In 1957, a coalition of Hollywood unions commissioned a report that found a sharp increase in the number of movies filmed in Europe and Mexico. In 1961, Charlton Heston told Congress that foreign subsidies were doing damage to the U.S. film industry, and he urged lawmakers to “fight subsidy with subsidy” (they didn’t bite). Over the years cities and states have taken a cue from other countries, first by offering nickel-and-dime freebies like film permits and police protection, then by peddling generous tax credits. These days the feeding frenzy is so intense that producers hire consulting firms to play one state against the other. “You take care of the movie, we take care of the incentives” is the slogan for the Incentives Office, a Santa Monica firm.

Admittedly, the discounts are hard to ignore. To see how much impact they have on a given movie, the Independent Film & Television Alliance ran a test, using a hypothetical $19 million production budget and then factoring in the effects of incentive packages for Los Angeles and five states. When looking at operating costs alone, L.A. falls somewhere in the middle; Florida, New Mexico, and Illinois are a bit more expensive, and Louisiana and Utah are slightly cheaper. With the incentives, however, the differences can be huge: L.A. nets out at $17.3 million, which is lower than Florida but much higher than Louisiana’s $13.7 million.

For states canvassing the drab world of economic development, show business has obvious sex appeal. “The streets are shut down, there are cameras—it’s exciting,” said Susan Christopherson, a Cornell University professor of urban and regional planning who has studied the impact of runaway production since the 1980s. Christopherson was speaking to me from Albany, New York, where a feature film was being shot. “People see this and think, Wow, that’s cool. We’d like to see more of that.” Beyond the glamour are some tangible, if fleeting, benefits: jobs for carpenters, caterers, and other crew members (usually at lower rates than in union-dominated L.A.), plus the revenues generated from filling hotel rooms and restaurants. If enough work comes a state’s way, location shooting could lead to investments in studios and production facilities—a mini Hollywood.

That’s been the idea anyway. But movies are a transient business. Wisconsin could see a couple of projects and then nothing for months—hardly the makings of a reliable job creator. The still-struggling economy doesn’t help—studios are putting the brakes on movie development, regardless of where the features are being shot, because its once-reliable business model (DVD sales, cable, foreign distribution) is coming unglued, and they’re having a hard time recalibrating. But the biggest obstacle has been from state bean counters, who have found the movie business to be far less lucrative than was first thought. California’s incentive program is just getting started, so it will be a while before there’s enough data to determine how much it costs and what the benefits are. But for every dollar in tax credits given up in Connecticut, the state receives eight cents in revenue. In Rhode Island, it’s 28 cents; in Massachusetts, 15 cents. “This is not economic development,” says Steve D’Amico, a Massachusetts state representative who asked the Department of Revenue to analyze the state’s film credit program. “We’re not creating jobs. We’re renting them.”

To be fair, there are a zillion ways to slice and dice the cost benefits of film production, and two studies have concluded that the incentives can indeed pay for themselves once all the trickle-down impacts are considered. But that’s a minority view. A policy analyst for the Federal Reserve Bank of Boston actually did a study on those two studies and found problems with their methodologies. Gumming up the two studies even more is that they were prepared by the accounting firm Ernst & Young, which is employed by the Motion Picture Association of America, a promoter of incentives.

Taxpayers are often clueless about not just the payout but the process. Case in point: Producers don’t need nearly as many tax credits as the state hands out, so there’s frequently a clause in the rules that allows for “transferability.” The tax credits are sold to another party—typically a corporation that wants to reduce its tax liability—and the production company pockets the cash, usually before filming starts. The state is effectively bankrolling part of the picture, despite the incentive being billed as an inoffensive-sounding “tax break.” “It’s the only way production financing is happening,” says Jean Prewitt, chief executive of the film and television alliance. “The film won’t get made if they can’t put a deal together.”

And that’s not good because…? Call me a hopeless romantic, but it’s still worth believing that business should be able to carry on without the help of government handouts. Even the massive bailouts of GM, Bank of America, and AIG were designed as temporary cash infusions—and came about only as the result of extraordinary circumstances that have affected the world economy. Making a movie in Ames, Iowa, is not an extraordinary circumstance.

At least California officials had the sense to ratchet down the swag. Transferable tax credits, for example, are available only to independent films being made for less than $10 million. Also, safeguards are written into the regulations that try to weed out productions already slated to shoot in L.A. Even so, following the lead of other states wanting to take away our business seems cockeyed, not to mention unnecessary. Given L.A.’s dominance as an entertainment center, there are other ways to woo producers who wouldn’t mind sleeping in their own beds each night. The Los Angeles City Council recently came up with a package of nominal perks (free parking, easier access to the zoo and other hard-to-shoot locales) that could help. Cash isn’t always the best and only weapon. If costs are higher here for shooting a movie, there’s a good chance they’re also high in the electronics, finance, chemical, and food processing industries. Everybody has problems in Los Angeles, a city known for its costly and overlapping bureaucracy. Just stick to making life easier for all businesses, and the rest will take care of itself.