Home Uncategorized Move Over, @TipsforJesus: @HiddenCash Has Angelenos in a Frenzy 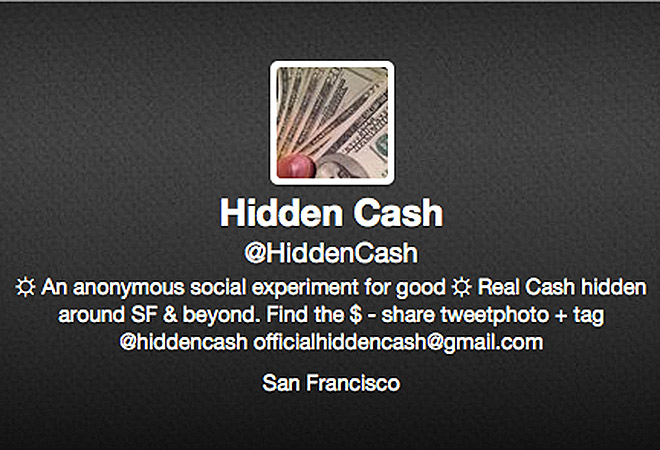 Picture this: A citywide scavenger hunt put on by a wealthy, anonymous donor, the prize for which is a wad of free cash. Would you want to play? Yes? Go figure.

Turns out such a quest actually exists thanks to the mystery man behind the Twitter handle @HiddenCash, who is apparently a really (really) Good Samaritan. Describing himself as a real estate developer between the ages of 35 and 45, he claims to have created this game for kicks, or as a way to pay it forward: The guy landed a six-figure sum upon closing a property deal and simply felt the need to share the wealth.

Not stopping and no plans to stop. Gonna keep getting bigger and better. Just taking a break from talking to media is all. Back to the fun.

The games began last Friday in the Bay Area, moved on to San Jose, and as of yesterday have landed in L.A. Word on the street is that our modern day Daddy Warbucks plans to be active here for the next five days. Here’s how it goes: @HiddenCash, who you’ve probably already started following by this point, sticks a random amount of dough in an envelope and hides it in a specific neighborhood (yesterday it was Burbank). He then tweets clues to his followers that hint at the envelopes’ whereabouts, which has expectedly caused hysteria. At yesterday’s event, hundreds of people left no stone unturned, risking their lives by darting across roads in front of traffic. According to the Times, it’s reported that one woman even abandoned her car in the middle of the street to take part in the festivities.

If you’ve nothing better to do this weekend, why not join in the fun? Apparently there are three drops scheduled for this very morning, with more coming this evening. Fix your eye on Twitter and you may just score big time.

Here’s the 3rd, and more to come this afternoon. Very close to the 2nd. pic.twitter.com/6N81PDow8K

Facebook Cracks Down on Some of the Biggest QAnon Accounts