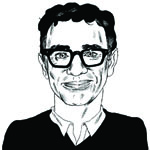 Silver Lake was named “America’s Hippest Hipster Neighborhood” by Forbes in 2012. Does this mean L.A. is more hipster than Portland?
I like to think Portland and L.A. are not rivals; they’re cousins. As cities on the West Coast, they’re distinct in their own way but still culturally similar. But as much as I love Silver Lake, it’s not the hippest neighborhood. That’s actually Echo Park. You can tell it’s really the hippest because there are still “experimental shops” where you’re not quite sure what they sell, yet they somehow stay in business.