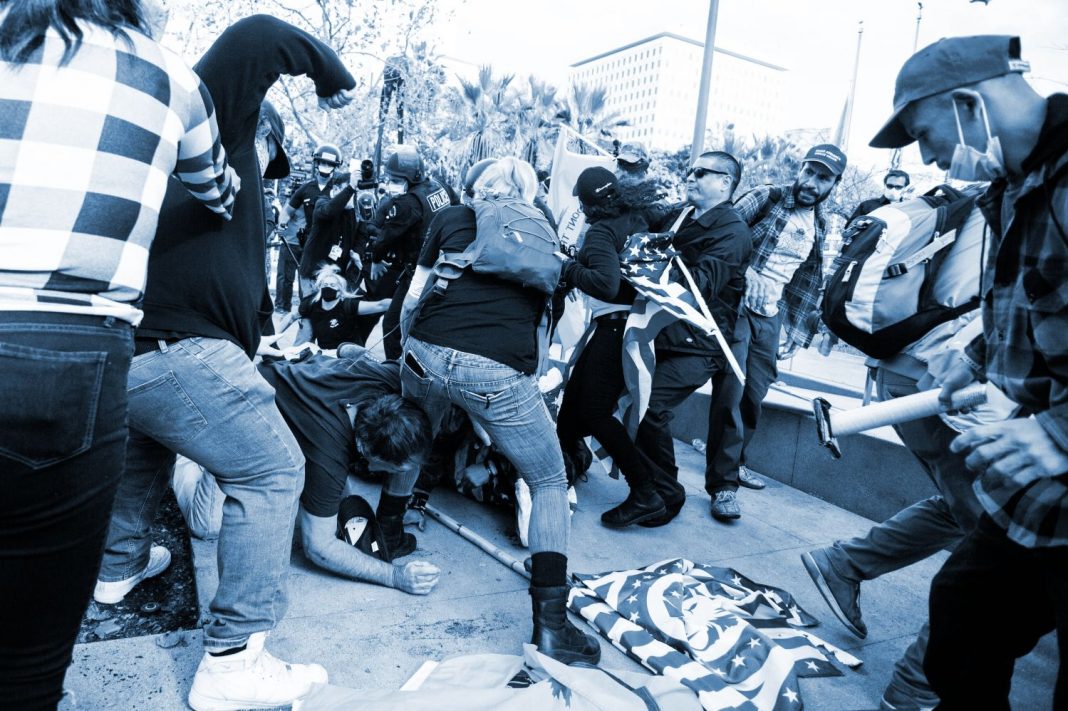 » A small group of Trump supporters gathered in downtown Los Angeles on Wednesday. Fights and clashes between those individuals and police and counter-protesters broke out in several locations. [Los Angeles Times]

» Twitter locked Donald Trump out of his account for “at least 12 hours” and threatened to permanently block him if he continued to use the platform to spread misinformation. Many criticized the company for waiting until now to take serious action against him. [The New York Times]

» Some California agriculture workers are leaving for Mexico, citing pandemic, racism, and insecurity. “Even though the virus is blind to people’s citizenship or visa status, immigrants can be especially vulnerable to infection, serious illness, financial hardship, and hateful discrimination,” one researcher says.  [The Guardian]

» O.C. Rep Michelle Steel, a mask mandate skeptic, tested positive for COVID-19 on Wednesday. The just-inaugurated member of Congress claims that her office has “done the appropriate contact tracing” since getting the result. [Los Angeles Times]

» The top Republican in the California state Senate posted a tweet alleging that the U.S. Capitol mob was actually “antifa.” Sen. Shannon Grove later deleted the tweet, which a spokesperson said was “incomplete.” A revised tweet clarified that she actually thought the events were “the way antifa behaves.” [Los Angeles Times]

» Rep. Ted Lieu Calls for Trump to Be Removed Due to ‘Coup Attempt’ The Congressman is among several who called for Mike Pence to initiate 25th Amendment proceedings.

» ‘An Absolutely Incredible Occurrence’: Rep. Maxine Waters Speaks Amid Today’s Attack on the Capitol As supporters of Donald Trump stormed the Capitol Building today, the Southern California congresswoman spoke with Los Angeles magazine about what she wants her constituents to know

Dr. Dre told followers he’s “doing great” following a reported brain aneurysm that landed him in the hospital in L.A.

“Thanks to my family, friends and fans for their interest and well wishes,” he wrote. “I’m doing great and getting excellent care from my medical team. I will be out of the hospital and back home soon. Shout out to all the great medical professionals at Cedars. One Love!!”