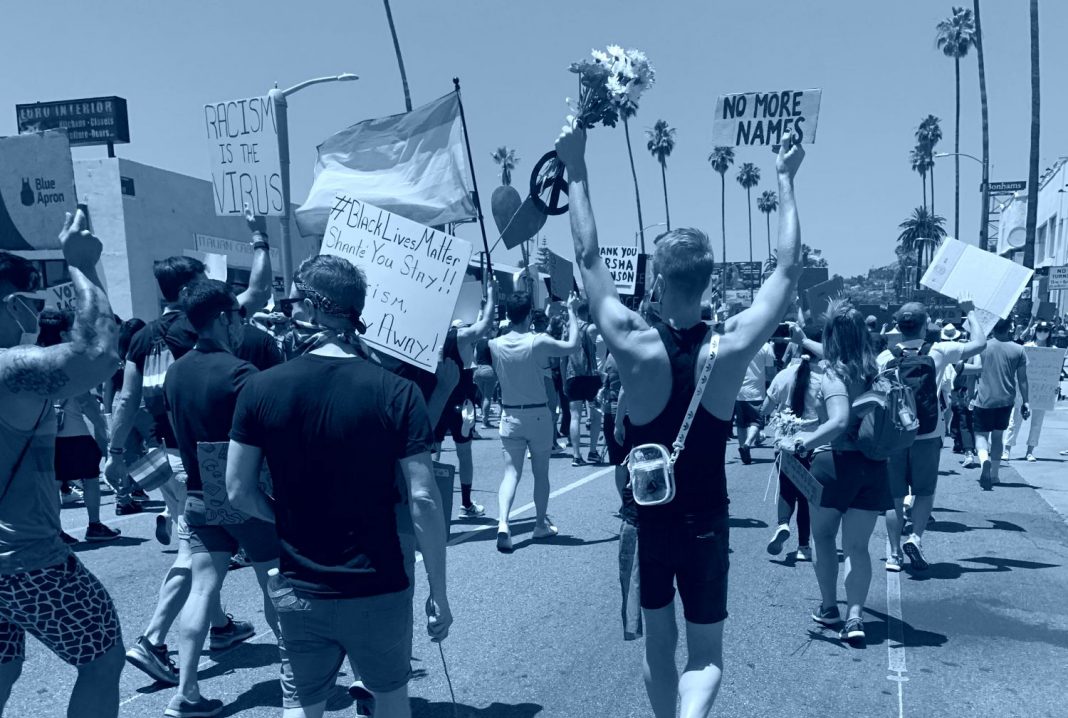 » An estimated 30,000 marchers turned out for Sunday’s All Black Lives Matter protest. The event was a show of support for the racial justice movement at large, and for the LGBTQ+ Black community in particular. [NBC Los Angeles]

» The Supreme Court dealt a blow to the Trump Administration, issuing a landmark ruling that gay, lesbian, and trans workers are covered by Title VII of the Civil Rights Act. “An employer who fires an individual for being homosexual or transgender fires that person for traits or actions it would not have questioned in members of a different sex. Sex plays a necessary and undisguisable role in the decision, exactly what Title VII forbids,” Justice Neil Gorsuch, a Trump appointee to the court, wrote in his opinion. [CNN]

» Airline passengers with COVID-19 flew into LAX in March–and the public wasn’t informed until now. One man visiting from New York City is now linked to multiple cases including at least 13 deaths. Public health officials failed to quickly contact the other passengers and crew members on his flight, or the flight of a woman who was discovered to have travelled from the Philippines with the virus.  [Los Angeles Times]

» Two Black men have been found hanged from Southern California trees, just days apart. One man was discovered in Los Angeles County, one in neighboring San Bernardino County, both in view of local government buildings. In both cases, authorities swiftly labeled the deaths as suicides, but a swelling public outcry is calling for deeper investigations. [The New York Times]

» While jogging in his San Fernando Valley neighborhood, former Saturday Night Live cast member Jay Pharoah was surrounded by LAPD officers who held him at gunpoint while one officer appears to kneel on the comedian’s neck. The department cites a case of mistaken identity, saying Pharoah resembled the description of a suspect.  [CBS News]

» A Huntington Beach man is charged with poisoning homeless individuals and then creating videos of the victims. Authorities say William Robert Cable offered the unhoused people food after dosing it with a substance “twice as strong as pepper spray.” [Time]

» Only about 200 people live in the City of Vernon, but COVID-19 outbreaks at the city’s factories—including one particularly hard-hit Farmer John’s facility—means there have been more cases of the virus than residents. That has surrounding communities worried. [Los Angeles Times]

» The Motion Picture Academy has set new standards for Oscar eligibility and Academy membership desired to boost inclusivity. The organization, which has been criticized for historically being dominated by white men, has committed to phase in the new initiatives by 2025. [Los Angeles Times]

» The Pandemic Ushered in a Dip in L.A. County Rent Prices One data tracker predicts the trend could continue throughout the year

Does Splash Mountain Need a Reboot?

Disneyland flume ride Splash Mountain was a hit from the day it opened in 1989. All summer, crowds encircle the 87-foot-high peak for hours waiting their turn to freefall through the bramble and get soaked on the way down.

Before you get to the splash, you spend nine-and-a-half minutes floating by the characters from Disney’s 1946 musical Song of the South. Most kids today have no idea where the characters come from since the movie has been out of circulation for decades and has never had a U.S. home video or streaming release.

Now, activists are calling for references to the movie to be scrubbed from the theme park attraction. “While the ride is considered a beloved classic,” a petition on Change.org says. “It’s history and storyline are steeped in extremely problematic and stereotypical racist tropes.” Thousands have agreed with the petition’s idea to retheme the ride to another film set in the American South, The Princess and the Frog.