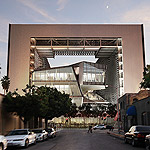 In addition to two forthcoming skyscrapers, Emerson College is set to stake its architectural claim in Hollywood: by spring of next year, the Emerson College Los Angeles Center will open its doors, acting as the West Coast home for its Boston-based student body.

The new campus’ Senior Executive Founding Director, Kevin Bright, feels Emerson College Los Angeles will benefit both Angelenos and Emerson students. “This is a tremendous statement and accomplishment for the college as well as an incredible addition to the L.A. skyline, to Hollywood, and to the revival and gentrification going on in that neighborhood,” he says. “We’re making a statement by building something like this. We want our students to make a contribution locally, not to just be one part of another satellite program.”

Situated in a once-vacant lot at the intersection of Sunset Boulevard and Gordon Street, the building, which was designed by Pritzker Prize-winning architect Thom Mayne, will add a unique silhouette to the Hollywood skyline. Peruse the slide show above to see realistic renderings of the future building.