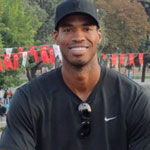 Jason Collins Becomes The First Out Player in the NBA
The free agent center, who grew up in Los Angeles, tells Sports Illustrated, “why not live truthfully?”
[SI]

Christopher Dorner Started a Mini Trend Among LAPD Firees
Now more than three dozen other fired cops would like their cases reviewed.
[LAT]

Shots Were Fired At MyStudio in Hollywood Early This Morning
One man is in critical condition and no arrests have been made.
[NBCLA]

Bob Hope’s Personal Belongings Will Be Sold For Charity This Weekend
Fans and collectors will find antiques, paintings, pictures and more at the St. Charles Borromeo Church in North Hollywood.
[DN]

After a Man Dressed As Spiderman Committed Robbery The LAPD Conducted a Spidey Sweep on Hollywood Boulevard
Marilyn Monroe was questioned, too.
[LAist]