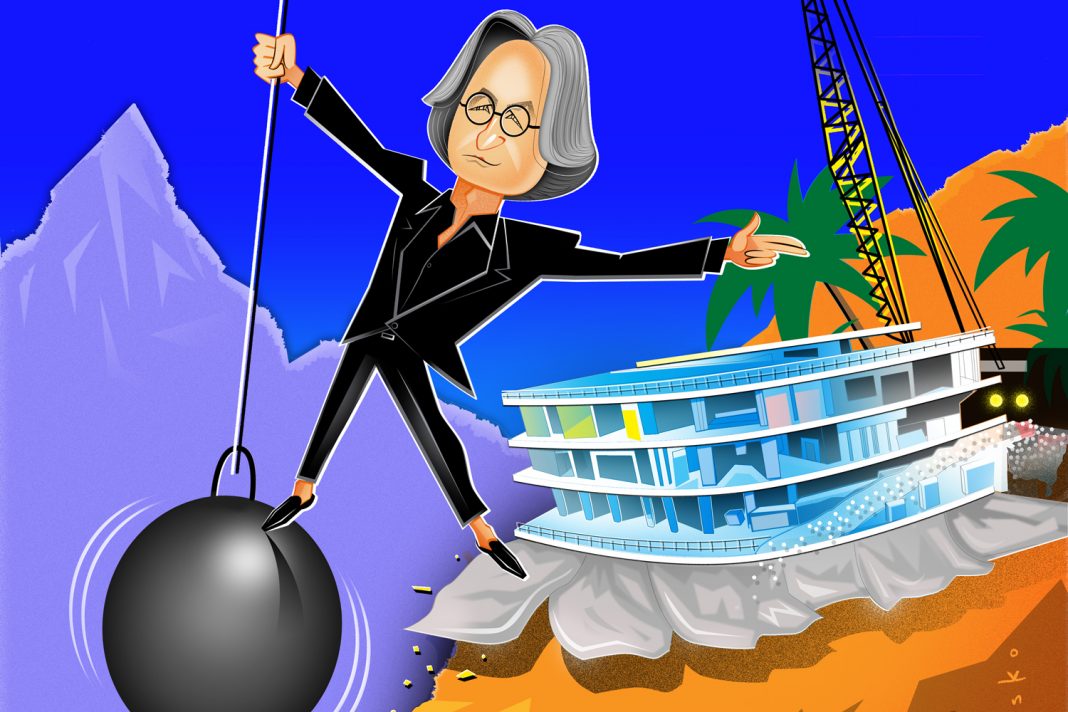 In this befouled era of QAnon plots and disputed elections, the conspiracy being peddled by real estate developer Mohamed Hadid seems almost quaint, a throwback to a time when things weren’t so utterly unhinged. In his plot, which could have easily been ripped from a Michael Connelly novel, there are no pedophiles or communists hounding the 71-year-old, just a well-connected neighbor—a semi-retired lawyer—with an axe to grind and a corrupt judge abetting his misdeeds.

At the center of it all is La Strada, Hadid’s hillside Bel-Air spec mansion on Strada Vecchia Road, which, in the nine years since Hadid broke ground, has morphed into a $50 million albatross. In June, a judge ordered him to tear down the structure after years of legal battles comprised of a catalog of accusations that include illegal building, extortion, and bribery, all of which have triggered multiple lawsuits, a criminal case, and an FBI probe. Last November, Hadid claimed—after several failed bids to appeal the June ruling—that he was too broke to pay for the court-ordered demolition. Currently seated in a chandeliered dining room adorned with pricey artwork in a gated house just off Coldwater Canyon, Hadid does not appear to be someone who is lacking.

“I’m so sick of this house,” says Hadid as he shuffles through aerial shots of La Strada’s construction site before quickly snapping back into battle mode. He’s dressed in all black—leather jacket, V-neck, skinny jeans, and tasseled leather loafers (no socks). He’s surrounded by dozens of boxes filled with mountains of court transcripts, rulings, correspondence between various city agencies, and enough building permits to reconstruct the Parthenon. These documents, he says, are evidence that he has done nothing wrong and will vindicate him when he’s finally granted his day in front of a jury—something he claims his enemies have tried to cheat him out of.

“This has never happened in the history of the United States, and I’ve looked everywhere—a judge coming to a site with a court reporter where he then becomes the judge, expert witness, and executioner,” says Hadid, referring to a 2019 visit to La Strada by L.A. County Superior Court Judge Craig Karlan, who determined that the structure did not appear safe and needed to come down.

La Strada has morphed into a $50 million albatross. “I’m so sick of this house,” Hadid says.

Hadid’s original sin dates back to 2017, when he pleaded no contest to three misdemeanor charges stemming from alleged building violations in the construction of the nearly 30,000-square-foot mansion (one of those violations included the installation of an unpermitted IMAX movie theater). But he vigorously disputes that his no contest plea can in any way be construed as a tacit admission of guilt. He says he did it to save the reputation of others.

In recent years, despite a string of legal setbacks (or perhaps because of them), he’s leaned into the playbook used by another infamous, bare-knuckled real-estate-developer-turned-reality-television-star with gaudy taste and beautiful daughters.

“This is a total sham. A total abortion of justice,” says Hadid before laying out the dizzying web of complicit actors—Los Angeles’s version of a Deep State, if you will—that are all out to destroy Hadid and his legacy. That list includes the Bel-Air Association, dozens of building inspectors, the Department of Building and Safety, local news media, his former contractor, L.A. city council member Paul Koretz’s office, and Karlan. But the wizard behind the curtain is his neighbor, Joseph Horacek, who was a founding partner of legal juggernaut Manatt, Phelps & Phillips. According to Hadid, it is Horacek who, through his firm’s connections with the worlds of finance, politics, real estate, and the county’s courthouses, has conspired to derail La Strada and destroy the Nazareth-born Hadid in the process.

Hadid will face off against Horacek and one other Bel-Air resident in a civil suit that’s scheduled for January. The parties have sued and countersued and are seeking unspecified damages. Hadid’s ace in the hole, or so he thinks, is a conversation he had with Horacek in 2017 that he secretly taped. In a transcript of that conversation, the two are clearly discussing the troubled project and the possibility of Hadid paying Horacek $3.5 million to “gracefully withdraw” some or all of his complaints. Hadid says this is evidence of extortion. Not so, says Horacek’s lawyer.

“His extortion claim is garbage,” says Gary Lincenberg of the firm Bird Marella. “What it shows is a settlement discussion, which is something that happens thousands of times a day. The illegal recording shows there’s no extortion. It’s such a red herring and a diversionary tactic. This is Hadid trying to divert everybody’s attention away from his criminal conduct. The card that he’s playing right now is going to the press and trying to pollute jurors. It’s despicable.”

Before he became known as the father to supermodels Gigi and Bella Hadid and a regular on The Real Housewives of Beverly Hills and Second Wives Club, Hadid made a fortune in the ’80s in the Washington, DC, area as a developer of commercial and residential properties. He then headed west and developed a handful of multi-million-dollar mansions around Southern California, including Le Belvédère in Bel-Air, which sold for $50 million in 2010. He emerged as one of the city’s megadevelopers—a small contingent of builders and designers who came to rival some of their celebrity clients in fame and notoriety. This group included Nile Niami and Bruce Makowsky, who, along with Hadid, vied to one-up one another on their respective projects, pushing the boundaries of grandeur, opulence, and increasingly absurd amenities. And for a while it worked. But cooling demand for eight- and even nine-figure spec homes followed by a global pandemic has left the once high-flying developers grounded and bruised.

Niami is reportedly highly leveraged by multiple eight-figure listings that are sitting empty. Makowsky made international headlines when he listed a four-story Bel-Air mansion for $250 million in 2017, but after languishing for two years on the market, it finally sold in 2019 for just $94 million.

Before moving to L.A., Hadid spent time in Aspen, Colorado, where he briefly clashed with Donald Trump, who at that point was just an ambitious real estate developer with a checkered reputation. Trump unsuccessfully sued Hadid over a parcel of land. “I don’t have anything against him,” says Hadid when asked for his opinion of the outgoing president. “For the business community and for the rich, he was a hero. But for the less fortunate, I don’t think he was a good president. Do I think badly of him? No, I don’t. I just don’t think he was the right president. I’m not conservative or liberal; I’m more of a conscientious voter,” he says.

Hadid also walks back comments he made to the Daily Mail in which he said that the alleged plot against La Strada was racially motivated due to his Palestinian heritage. He says he made those comments at an overly emotional moment, and that he just wants his day in court. But when asked why it is that draws so much attention, he reverts back to his name and his heritage. “I’m not Bob Smith,” he says. “The name Hadid—it pops right in front of you.”

Inside the ‘Bel-Air’ Screening Party in Los Angeles