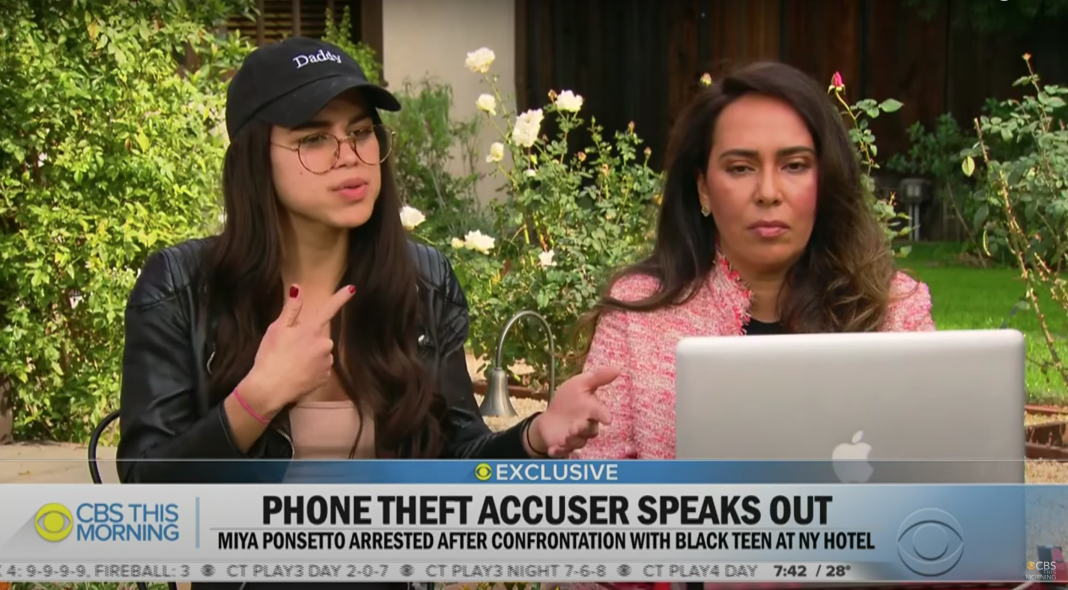 UPDATE: MONDAY, JANUARY 11 — Miya Ponsetto, the 22-year-old woman who was caught on camera in December allegedly attacking a 14-year-old Black teen in a NYC hotel because she falsely believed he’d taken her cell phone, was officially charged in a Manhattan court on Saturday with attempted robbery, grand larceny, two counts of attempted assault, and endangering the welfare of a child.

On December 26, at the Arlo Soho hotel, Ponsetto was seen screaming at, lunging at, and, allegedly, physically tackling Keyon Harrold Jr., son of jazz trumpeter Keyon Harrold, because she thought he had her iPhone; the device was subsequently located by hotel staff.

Upon returning to California on Sunday following her court appearance, Ponsetto—who has a history of DUI and public intoxication arrests—was asked by a Daily Mail photographer why she thought Harrold Jr. had stolen her phone. She replied, “Because he did.”

The Harrold family’s attorney, Ben Crump, is expected to give a press conference on the matter on Monday. “As this year of racial awareness is drawing to a close, it’s deeply troubling that incidents like this one, in which a Black child is viewed as and treated like a criminal, continue to happen,” Crump said in a statement following the incident.

FRIDAY, JANUARY 8 — A California woman who made headlines last month when she was caught on camera accusing a Black teenager of stealing her cell phone in a New York City hotel was arrested near her home outside of L.A. on Thursday.

Miya Ponsetto, 22, was arrested and jailed by Ventura County Sheriff’s deputies after they spotted her driving near her home in Piru, northwest of Los Angeles, department Captain Eric Buschow told the Associated Press. Charges against her were not announced.

NYPD detectives had flown to California earlier in the day, seeking Ponsetto in connection with a December 26 incident at Manhattan’s Arlo Soho hotel, during which Ponsetto was filmed accusing 14-year-old Keyon Harrold Jr. of stealing her cell phone and snatching at him as he tried to get away. In a surveillance video from the scene of the incident, it appears Ponsetto attempted to tackle Keyon Harrold from behind.

The teen’s father, jazz trumpeter Keyon Harrold, recorded the video, in which he can be heard telling Ponsetto to leave his son alone. In security footage subsequently released by the NYPD, Ponsetto can be seen tackling Keyon Jr. from behind.

It turns out Ponsetto had left her phone in an Uber, and the driver returned it minutes after the confrontation.

Speaking to Gayle King on CBS This Morning shortly before her arrest and wearing a hat emblazoned with the word “Daddy,” Ponsetto tried to explain what she’d been thinking when she went after Harrold Jr.

“I was approaching the people who had been exiting the hotel,” she said, “because in my mind anybody exiting is probably the one that—might be the one that is trying to steal my phone. I admit I could have approached the situation differently or maybe not yelled at him like that and made him feel, you know, maybe in some sort of inferior way.”

Describing herself as “super sweet,” Ponsetto added, “I really never ever meant for it to hurt him or his father.”

When King suggested that Ponsetto’s actions did not come off as sweet, Ponsetto replied, “How would you feel if you were alone in New York and you were going to spend time with your family during the holidays and you lose the one thing, that gets stolen from you, that has all of the access to the only way you’re going to get back home?”

Ponsetto then offered, “I don’t feel that that is who I am as a person. I don’t feel that this one mistake does define me, but I do sincerely from the bottom of my heart apologize if I made the son feel as if I assaulted him or if I hurt his feelings for his father’s feelings.”

When King points out that Ponsetto did more than yell at the boy but got physical as well, Ponsetto cut in with, “I apologize. Can we move on?”

King, however, presses Ponsetto on the racial ramifications of the incident, at which point Ponsetto makes a “stop” gesture and says, “Enough,” as her lawyer turns and mutters something under her breath.

The lawyer, Sharen Ghatan, told the AP that her client is “emotionally unwell,” and that Ponsetto “strikes me as someone who is unwell.”

Harrold’s video of the incident has gotten 3 million views on Instagram and prompted activists to call for charges to be brought against Ponsetto, although it is still unclear what those charges might be.

Along with the video, Harrold expressed his disgust that hotel personnel not only failed to help the minor, bit seemed to side with the woman who was accosting him.

“This lady is not even a guest at the hotel,” Harrold wrote. “She checked out of the hotel on the 23rd of December; today is the 26th. Now watch as the manager advocates for the lady who is not even a hotel guest, insisting and attempting to use his managerial authority to force my son to show his phone to this random lady. He actually empowered her!!!”

Ventura’s Buschow, meanwhile, says that Ponsetto did not go gently when deputies first attempted to apprehend her. Instead, she drove for two blocks before pulling over, then refused to leave the car.

“She tried to slam the door on one of the deputies and that’s when they just reached in and forcibly removed her,” he said, adding that the sheriff’s office would ask county prosecutors to charge her with resisting arrest.

A Ventura Woman Got Her Lost Wallet Back—46 Years Later