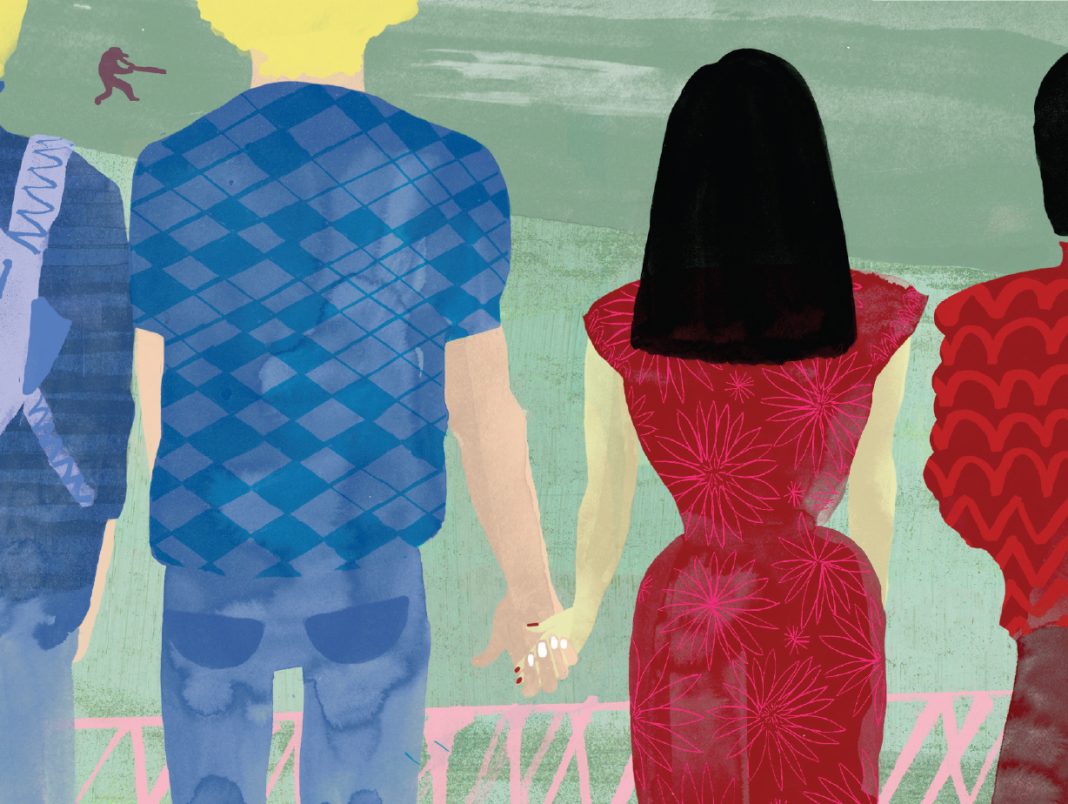 She was the girl across the hall, and I fell in love with her my senior year at UCLA. It was 1990. Diemha was Vietnamese—the color of hazelnuts, with a name I couldn’t spell. I was a foot taller and as pale as Crisco. The disparity seemed fun. But drinking coconut milk and slurping pho on our third date as the old Vietnamese ladies stared at us, I began to understand that our real differences were cultural. My father was a Jew who resented his Russian immigrant parents, resented being discriminated against in the Bronx (“Hey, fat Jew boy!”), resented losing four uncles in pogroms. Marrying my mother, a British WASP, was just another way of saying good riddance. My three siblings and I were raised knowing nothing about Judaism. Though my mom called us “half-Jewish,” I didn’t feel half anything, especially when we left L.A. for Arizona after the divorce. Diemha? She was Vietnamese through and through.

It’s often the case that you can’t simply be in love when you’re in a mixed relationship; people assume there’s more to it. I’ve read comments from Asian guys explaining that any Asian girl dating a white person wants to be white herself. I’ve heard it said that Asian women are attractive to men who like their women subservient. I was accused of having an Asian fetish by a coworker at one job (“So you got yellow fever, huh?”) and by a half-Japanese woman at another (“My dad was an Asianphile, too”).

Diemha’s parents carried around their own suppositions. Diemha’s father had been a judge and her mother had gone to law school before they fled the fall of Saigon with three kids (a fourth was on the way) and two grandparents in tow. They crammed into apartments in D.C., Virginia, Massachusetts, Fountain Valley. Her parents muddled through, hopping from one small business to the next—liquor stores, markets, dry cleaners; factory work was the next step after the coming riots destroyed their Laundromats. Their English was as poor as they were, their traditions the remnants of who they thought they were. To them, the only way their kids would be secure was by becoming a doctor or a dentist. What they didn’t need was to risk having some loosey-goosey white guy distracting their oldest daughter from school or vitiating her heritage.

They wouldn’t meet me the first time Diemha brought me to their home. They told her to date Vietnamese guys. They threatened to disown her and warned about chastity. Living together wasn’t an option the year we dated before Diemha moved to Montreal for medical school. Stuck in L.A., I’d fly out to stay with her every few months, Diemha weeping about having to sneak around behind her parents’ backs. I came from a family where shacking up wasn’t a big deal. But Diemha wouldn’t be Diemha if she didn’t feel the pull of her parents. So I played along. I even drove to their house to ask if I could get engaged to their daughter. And they said no. They wanted their son-in-law to be a lawyer or a doctor. A Vietnamese one. It was racist, sure, but I understood where they were coming from.

After Diemha’s father told her it was either them or me, his wife set him straight; clearly she recognized a Shakespearean drama when she saw one. To this day, 18 years later, nobody in my family knows any of this. I mean, they barely understood why Diemha wouldn’t openly sleep over during holiday visits. “This is America. It’s not Vietnam,” I’d hear. “These people can’t come here and dictate how you should live.” Of course, they were talking about refugees, members of a culture that has long honored the family over the individual. So at our wedding two years later, everyone smiled and ate the roasted pig, the English speakers clustered on one side of the room, the Vietnamese speakers on the other.

Looking at my 10-year-old daughter or her 12-year-old sister, you might not even know they’re mixed. To me, they could pass for Russian. Once, I asked my sixth grader how she views herself—more Asian than white, more white than Asian, or none of the above? “I don’t really think about it,” she said. Maybe she’s too young for identity politics. But maybe it’s just that she’s surrounded by kids like her. Her soccer team alone is equal parts white, Asian, and multiracial. She has friends who are Latino, white, Taiwanese, half black, kids of one race who were adopted by people of another. She has an aunt who is half-Latina, half-Dutch American, while a cousin is Vietnamese and Korean and African American. In winter my girls light a menorah (my stab at illuminating something from my father’s side of the family), put presents under the tree, and eat Christmas tamales at a cousin’s house before celebrating Tet the next month in traditional ao dai.

I know we’re not so unusual. In fact, almost 15 percent of all new marriages in this country are mixed. But I’m not pretending it’s a small world after all, either. The brain is a complicated piece of machinery. Hotel desk clerks ask Diemha and me if we’re together. A little girl once referred to her as the nanny. My Vietnamese brother-in-law refers to white people as Americans. My family may never grasp Asian notions of filial duty. Diemha’s parents spare no opportunity to remind us in halting English that their grandkids don’t speak Vietnamese, while I still chafe at being left in the conversational ditch. We sit through entire meals eating caramelized catfish and white asparagus soup and pig’s ear sausage without speaking to one another, because the footbridge that food provides gets us only so far. But at least the footbridge is there. Like a lot of people in L.A., we’re enjoying an odd type of unity: the unity that comes from being different together. It’s not perfect, but it’s better than the alternative.

Matthew Segal is the executive editor of Los Angeles magazine.