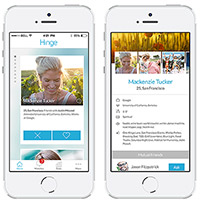 It’s not uncommon in this city to hear a friend, neighbor, co-worker, or the occasional loud stranger on his/her cellphone say, “It’s just so hard to meet people in L.A.!” The statement seems laughable considering the boom in mobile dating apps that queue up suitors like some sort of Netflix for humans, but new social discovery app Hinge, which launches in L.A. today, would purport that not all tech-fueled dating experiences are created equal. In fact, Hinge hopes to take courtship back to its old-fashioned roots by capitalizing on a concept apps like Tinder have only touched on: the importance of mutual friends.

While it’s true that Tinder users sign up via Facebook (meaning they’re able to see friends they have in common with potential future mates), users are also given the option to yea or nay randoms as well, as matches are determined primarily by geo-location. Not to mention, the app is seriously lacking on the romance front—let’s get serious, an invitation to “hang out” at Saddle Ranch steakhouse at 11 p.m. on a Tuesday is anything but sentimental. Hinge hopes to make a more significant connection. Here’s how it works: Sign in with Facebook. Select certain preferences (location, sexual orientation, age) and interests (foodie, nature lover, etc.). Based on those choices, the app’s algorithm matches users up with seven folks per day who have similar enthusiasms, all of whom are culled from one’s Facebook network. No hunting, swiping, or pre-screening involved.

Hinge founder and CEO Justin McLeod’s hope to bring the concept of meeting through friends into the online sphere could revolutionize dating in a city like L.A., where flakiness and distance (and a high volume of weirdos) tend to put a damper on the online dating game. “Our app is all about discovering real connections,” McLeod says. “While L.A. is full of very well connected people, it’s also a notoriously hard place to find people you genuinely click with. That’s probably why our waitlist in L.A. is more than two times [as long as] what we’ve seen in any other city. It’s the natural place for us to launch next.”

Angelenos looking for love can start by attending Hinge’s a launch party at Graystone Manor this Thursday, April 24. There are 25 spots on hold for LAmag.com readers; use this link and the passcode 2713 to reserve a space. May Cupid’s arrow fly straight, friends!