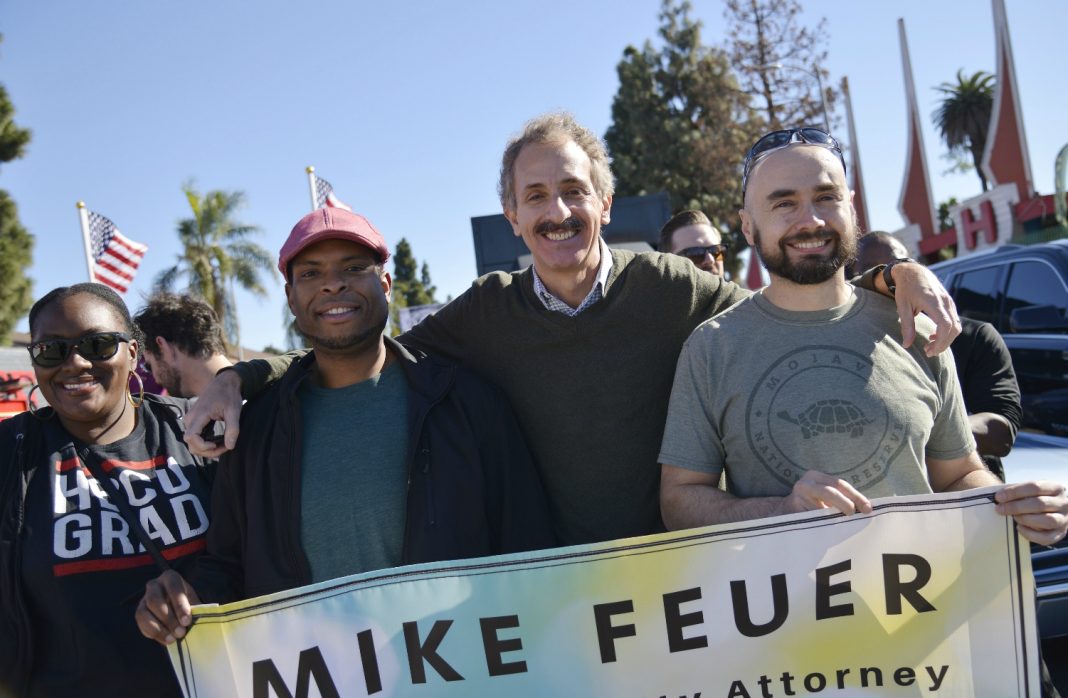 Mayor Eric Garcetti still has nearly three years left in his term, but the race to succeed him is underway.

City Attorney Mike Feuer has announced that he is running for mayor in 2022, and has filed papers for a campaign and launched the website mikefeuerformayor.com. He said he will begin reaching out to community leaders and potential donors, and that this week he will embark on a listening tour.

He said his campaign will be “neighborhood centered.”

“As City Attorney, I have taken great strides to change the nature of our office and make it more focused on how we make neighborhoods throughout the city safer and improve their quality of life,” Feuer told Los Angeles this morning. “I’m going to take that same approach to the mayor’s office and embed members of the mayor’s staff, of my staff, in neighborhoods throughout the city to tackle the priorities that matter most in communities.”

Feuer is the first of numerous individuals—from both inside and outside City Hall—who political observers believe may throw their hat in the ring. The mayoral primary takes place on March 8, 2022. Candidates can launch a campaign and begin raising money for the contest two years before election day.

Feuer is a political veteran who became City Attorney in 2013, and was re-elected to a super-sized second and final term in 2017 (the standard four-year term was extended to align city voting dates with state and federal contests). He previously served on the City Council, representing the Fifth District, which includes some neighborhoods on the Westside of Los Angeles, and then spent time in the state legislature.

As City Attorney, Feuer has been credited for adding stability to an office that was in tumult during the reign of his predecessor, Carmen Trutanich. Feuer has taken steps such as expanding the ranks of the neighborhood prosecutor program, going from eight individuals who work closely with local communities and police stations to 28. Feuer frequently describes himself as the city’s “chief problem solver.”

He is a longstanding and outspoken advocate of gun control. He joined with Manhattan District Attorney Cyrus Vance Jr. to launch and chair the organization Prosecutors Against Gun Violence.

During his seven years as City Attorney, Feuer has frequently sought to use the resources of his office to address homelessness, including starting a program to help homeless individuals clear citations and have tickets dismissed if they accept services such as drug treatment and job training. He has also prosecuted hospitals that illegally “dump” homeless patients, or discharge them, often to the streets, without arranging for after-care.

He said addressing homelessness and the creation of affordable housing will be key tenets of his campaign for the city’s highest office. Previously, he has called for the city to have someone who leads local homelessness efforts with a FEMA-like approach.

“I’m the person who will be in charge, but I need to have someone whom I designate, who speaks with my authority, who eats, breathes, and sleeps this issue every day,” he said. “And the plan is going to include grappling with the crisis now and getting people off the street, and mental health issues and reworking [Los Angeles Homeless Services Authority], to prevention.”

Feuer’s ride hasn’t been entirely smooth. Last July, FBI agents searched the City Attorney offices in City Hall East. Feuer acknowledged that warrants served on the office were related to class-action litigation and a settlement over a notorious 2013 Department of Water and Power billing system debacle, and a lawsuit the city had filed against PricewaterhouseCoopers, which created the system. No federal charges related to the case have been filed.

Then, in September, the city abandoned the lawsuit against PWC after individuals involved to the investigation invoked their 5th Amendment rights. Dismissing the case meant that ratepayers might have to cover the cost of the settlement.

Feuer maintains that, despite the tumult, he operated with integrity, including publishing a report on his website written by an outside ethics expert. He said he altered practices within his office, and that the situation made him a better leader.

“Mayors are going to confront crises they never saw coming,” Feuer said. “Completely unexpected things, like this issue was for me. I’m battle tested now.”

Feuer has also earned national headlines for his work. The L.A. City Attorney’s office initiated the first lawsuits against the bank Wells Fargo for its opening of unauthorized accounts; that led to a $185 million settlement. Last year, his office filed suit against the Weather Channel app, claiming privacy violations.

Feuer is the first person to announce a run for mayor, but with the seat completely open, and no incumbent, for the first time in nearly a decade, others are expected to test the waters. Local political watchers believe Councilman Joe Buscaino might enter the race, and there is speculation that State Senator Bob Hertzberg might run.

Others whose names are mentioned as potential candidates include Rick Caruso, the businessman and mall developer, and Wendy Greuel, the former City Controller who ran unsuccessfully against Garcetti in 2013.