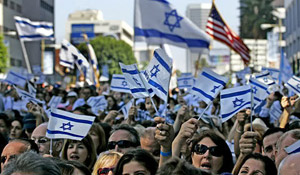 “Free Gaza from Hamas! Free Gaza from Hamas!” On Sunday, I stood squished among thousands of sweaty rally-goers pumping politically-charged signs skyward as they chanted support for Israel in the recent “Flotilla incident”. The Mid-Wilshire rally was commissioned by L.A.’s Israeli consulate and organized by the Jewish Federation to confirm that Israel did the right thing. It was less a call to action than thousands of people patting each other’s backs, reminding one another that Israel has a right to exist as a Jewish state. Longtime Israel advocate Rev. Robert Stearns wanted Jews to know that they aren’t demographically challenged – they’re in the company of millions of Evangelical Christians committed to Israel’s security, several of whom were waving Israeli flags topped with crosses to show their support. My favorite part of the event was when the ultra-Orthodox woman to my left translated Stearns’ speech for a little old Israeli woman at her side. “HE SAYS THE GOYIM WILL HELP US!” she squealed. The woman smiled and nodded in response.

Those who arrived early or on time got close enough to the stage to hear speakers like Gov. Schwarzenegger, Jon Voight, and Republican gubernatorial candidate Steve Poisner express solidarity with Israel (tardier attendees spent time reuniting with old friends and fanning themselves down the block). Though the rally was supposed to be flotilla-flavored, it tasted more like an all-purpose pro-Israel gathering. Schwarzenegger opened with a broadcasted call to Noam Shalit, father of 4-year Hamas hostage Gilad Shalit, and when Voight took the stage, he picked on Obama. “I am very disturbed that our president has not protected Israel in the manner in which he promised,” he said. B.H. Mayor Jimmy Delshad shook a fist at Ahmadinejad (who, if Delshad is lucky, will watch the rally later on DVR), assuring the Iranian president that he will indeed be overcome.

The funny thing about rallies is that they presume homogeneity of opinion, which, when pigs fly, is a completely reasonable expectation. But you could sense the diversity of Jewish taste by checking out who was on the menu for the event. Participants represented a range of religious, political, and ethnic backgrounds. (Representing the ultra-orthodox end of the spectrum, Rabbi Shlomo Cunin claimed he had come with a message straight from the holy Rebbe, Rabbi Menachem Mendel Schneerson, who has been dead for almost 25 years.) But when leftist organization Peace Now’s David Pine took stage, he was drowned out by heckling. Someone behind me yelled “Traitor!” a few times. When the emcee failed to command respect from the audience, police put their riot gear on. Once Pine finished his speech, people cooled down and order was restored.

At the end of the rally, several white doves were released from a cage to symbolize peace, a gimmicky effort to end on a hopeful note. Most fluttered away manically, which made for a good show, lots of wide eyes and “Wow!”s. But the last dove didn’t feel like following suit. Instead it landed right in the middle of the Media section and started looking around, ambivalently bobbing its head. Everyone waited in awkward silence until finally, someone shooed it into flight.