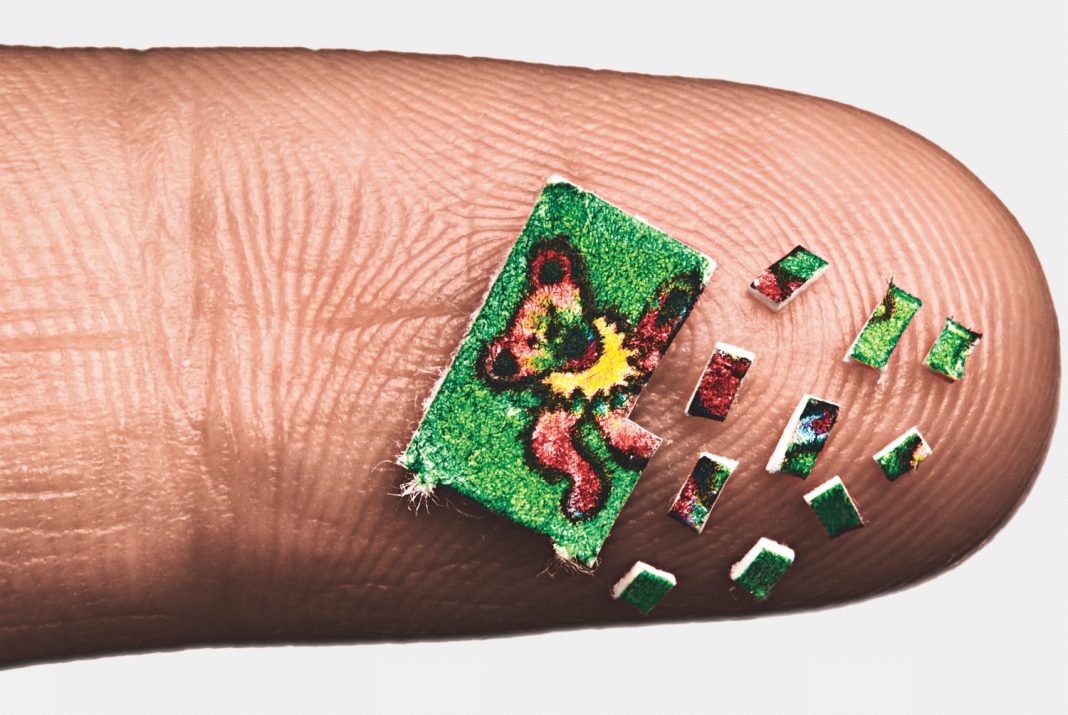 A couple of mornings a week, a well-known Silicon Beach executive rises promptly at 4:45, eats a locally sourced, organic breakfast, walks his dog, and takes a tiny hit of LSD. Then he goes to work. It’s a routine that he says he’s followed for years. “I can take acid and drive or run a major work meeting,” he says confidently. “You’re not taking a drug; you are literally dialing yourself up to a higher level.”

In fact, he’s so passionate on the subject that he’s emerged as something of a Svengali to both Hollywood and tech types. “These drugs are a way to program your mind,” he says with the unabashed brio of a successful software engineer. “Our brain is like an operating system. Most people are burdened with shit code. I figure out how to reprogram your subconscious brain.”

Years ago it would’ve been easy to dismiss this as the drug-induced ramblings of a guy up in the sky with Lucy and her diamonds. But these days taking miniscule amounts of psychedelics first thing in the morning—a practice known as “microdosing”—has become the rage in Hollywood and Silicon Beach boardrooms and executive suites. Proponents claim that ingesting as little as one-tenth of a recreational dose of psychedelic drugs can unlock their creativity in the workplace without resulting in hallucinations (or complaints from HR).

To hear them tell it, spiritual revelation—the kind of mind-expanding benefits that Timothy Leary and his band of counterculture academics once touted—have become secondary at best. The real goal of microdosing is to achieve increased productivity and, presumably, a leg up on all the other suits—performance enhancement for a generation that worships at the twin altars of disruption and innovation. Who cares about unlocking the hidden secrets of the universe when your app requires another round of funding or you’re searching for that new Netflix breakout? “Everyone wants to create the next big hit or billion-dollar company,” notes a well-connected agent. “They all want to be Elon Musk or Bill Gates.”

An exec says that he has inducted about 150 friends and acquaintances into the psychedelic movement (he prefers LSD but isn’t opposed to experimenting with mushrooms).

It’s hard to pin down the precise moment that the aspirational technorati began messing with psychedelics in a quest for professional success, but it has become part and parcel of a hyped start-up culture that rewards offbeat creativity. Superstars like Steve Jobs have long preached the gospel of acid. The Apple cofounder told a New York Times reporter that taking LSD was “one of the two or three most important things” he had ever done in his life. But Jobs most likely was referring to the traditional recreational doses of yesteryear rather than today’s fractional dabbling. “People who are microdosing aren’t taking enough to see trees turn into marshmallows,” explains James Fadiman, a Stanford-educated psychologist and author of The Psychedelic Explorer’s Guide. Fadiman’s 2011 book introduced the idea of microdosing with a short chapter on the subject.

“They didn’t even have a name for microdosing back then because tiny amounts like that really didn’t fit the psychedelic narrative,” says Fadiman. “It didn’t make sense to me because I was a high-dose psychedelic researcher, but I’d heard random stories and began to do more research.” Today he is considered a leading authority on the subject and asserts that he “came up with a protocol on how to dose.” While he says his prescribed regimen varies on a case-by-case basis, “in general we find it’s best to do one day on, two days off, and then just keep repeating the pattern.”

It’s a regimen that the Silicon Beach executive not only follows but also passionately recommends. When he’s testifying to the drug’s myriad benefits, he sounds like an old-school Pentecostal preacher delivering a Sunday sermon. But it’s a rather mercenary notion of spirituality. Rather than nirvana, his followers may find themselves at the helm of a lucrative young company. “It’s mindful medicine,” he says. “It makes you smarter and more productive. I feel like I’m making a massive difference in people’s lives without giving up on capitalism.”

Since 2015, the exec says that he has inducted about 150 friends and acquaintances into the psychedelic movement (he prefers LSD but isn’t opposed to experimenting with mushrooms). Among his converts is a Hollywood producer who had recently found himself struggling to close deals. As a fix, the Silicon Beach guru suggested a guided trip. So last October, the two men decided to take a morning hit in Venice. But before ingesting any drugs, they brought out a whiteboard and began jotting down areas where the executive was feeling stuck and seeking a breakthrough. Then they took 1.75 grams of mushrooms—half of a recreational dose—and began to reevaluate the list in an effort to create a new mind map. “The first time set the tone for me,” the executive says. “It’s a tweak on your thinking. I look at a complicated finance deal and realize how to make it work.”

Now, every other morning, he adds half a gram of psilocybin mushrooms to his usual egg-white omelette breakfast. He chooses to dose early in the day because “it stimulates the brain, keeping me alert and focused throughout the day.” As for holding it together at work—visual trails being the last thing anyone wants to see in a development meeting—he claims that the mushrooms become entirely manageable when minimized. “It gives me an edge, and no one knows why. They just tell me I’m calmer, and my ideas have never been better.”

Tech bros and Hollywood’s industry elite aren’t the only proponents of microdosing. One well-known young actor was so intrigued by psilocybin’s purported powers that he dug a bag of mushrooms out of his freezer (leftovers from a “never again” experience at Coachella) and shaved off a tiny bite. A half-hour later, he says, he found himself uncharacteristically productive for a Tuesday. “The words I kept hearing were ‘focused’ and ‘creative,’ two things I’m constantly chasing after,” he says. “I also don’t like taking a lot of prescription medications for that sort of thing.” So contented was he with the result that he dosed again the next day, right before an audition. “Not only was I able to tune out the nerves of booking the job,” he says, “I felt myself come alive as the character, bristling with an emotional intensity that I didn’t have to summon or force at all.” Oh, and he booked the gig.

L.A.’s arty elite are perennially chasing that elusive extra edge, and for decades, many have used drugs, mostly uppers, as tools to achieve it. Cocaine was so prevalent in ’80s and ’90s L.A. that insurers started to deny coverage to actors and directors deemed drug risks. As the acute and very real dangers of coke addiction became apparent, pedigreed pharmaceuticals like Adderall and Vyvanse soon became the industry’s new magic bullets. But microdosing reflects a culturewide retreat from the manic ethos of its predecessors. “In this gluten-free, free-range era, it feels safer to have fun with something nonaddictive and natural like mushrooms,” says a veteran filmmaker. “You don’t feel like you’re racing all the time. When you microdose at work, no one knows.”

But that’s not always the case. A producer recalls a woman who proudly admitted to dosing an hour before their recent meeting. “She bragged that I never would have known if she didn’t tell me, but it was pretty obvious,” he says. “She was so annoying and spacey and slow. It seemed clear that she was high.”

While lethal overdoses are unlikely, the delayed onset of the drugs can sometimes cause serious problems.

Another misconception about psychedelics is that because they are “natural,” they can’t do real physical damage. While lethal overdoses are unlikely, says L.A.-based ER physician Scott Jacobs, the delayed onset of the drugs can sometimes cause serious problems. “Folks eat them and the drugs don’t take effect for 30 minutes, so they think nothing’s happening,” Jacobs says. “So they eat more, take too much, and massively freak out. Then they end up in the emergency room.”

People who study psychedelics admit that overindulging is usually a rookie’s mistake, but the potency among different batches can vary so widely that even seasoned dosers might run into trouble. After four successful trips, a 20-something Silicon Beach entrepreneur was flattened by his fifth, even though he never varied the dosage. “I had really dark thoughts playing interminably, on a loop,” he says. “I couldn’t wait for it to end.” He hasn’t dosed since.

While the risk of side effects might be enough to scare some people off, true believers refuse to relent. The danger won’t change the morning mushroom routine of that Hollywood exec. “Work is on fire and I’m pouring down investment,” he says. “It is kind of nuts. Everything is happening for me now.”

His psychedelic mentor, the Guru of Silicon Beach, had no doubt about the source of his newfound success. “Dosing is really not a recreational thing,” he says. “It’s about growth. It’s literally like downloading new software that helps us operate properly. It’s simple, but it’s not always easy to get just right.”

RELATED: Are Weed Weddings the Next Big Thing in Southern California?

Could California Become the First State to Decriminalize Magic Mushrooms?