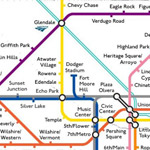 Yesterday, Vice magazine posted a story titled “Reasons Why L.A. Is the Worst Place Ever,” bemoaning things like David Spade’s star on the Hollywood Walk of Fame and the names of the dishes on the menu at Gratitude Café (guess someone’s wasn’t feeling grateful).

The article also harped on the limits of L.A.’s public transit system, so when associate digest editor Randy Clemens posted a parody chart from Mandatory.com making fun of L.A. drivers, parking, cabs, and subway use by comparing drinking here with drinking in New York on our Digest blog, KCET editor Zach Behrens picked up the thread and took it to Twitter:

Replies to Behrens were mixed. Here’s a sampling, organized into groups named after Gratitude Café dishes (see how handy they can be, Vice?):

Los Angeles magazine editor-in-chief (and frequent metro rider) Mary Melton weighed in too, tweeting that public transportation in L.A. is “imperfect but rapidly improving.” A few pieces of evidence? According to MTA boss Art Leahy in this 2010 Q&A, local metro fares are lower than those in other big cities, the MTA’s 2012 budget was its biggest ever, plans for additional subway stops on and around the Miracle Mile and South L.A. are underway, the Expo line was embraced by riders when Phase 1 opened in April, and its extension to Santa Monica should be complete by early 2015.

As for our feelings on the first article that caught Behren’s eye, the one over at Vice, @LATACO expressed our thoughts exactly: