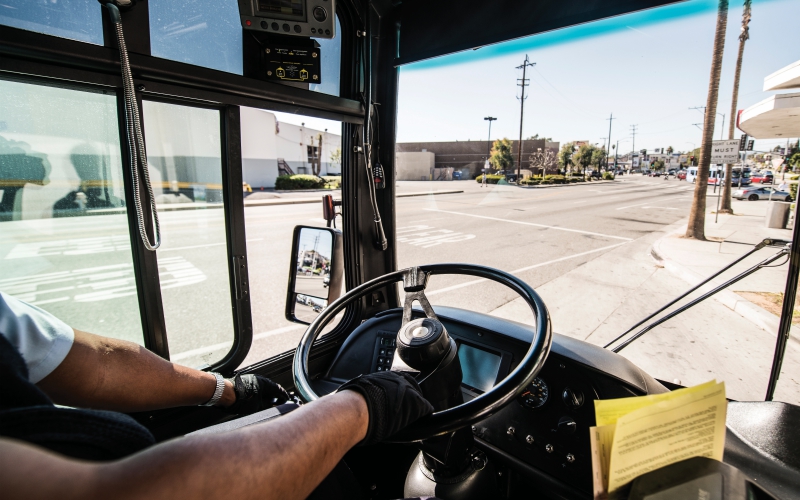 “I’ve been a bus driver since 2002. When you have seniority you can pick the division you want to work at. On an average day I pick up hundreds of passengers. Sometimes I have to leave people behind because I’m at capacity. I can fit about 60 people. Some people are talking on their cells. I know who’s cheating with who. They always forget there’s a driver on the bus. A passenger danced for me just to get a free ride, so I let him on. Why not?

“The scheduling is really bad. A line that might seem to take one hour could actually take an hour and a half, not because of traffic but senior boardings. We need to give them time to sit down. Sometimes we need to pull the ramp for them. There are wheelchair passengers that we have to kneel the bus for. That takes time, and sometimes they don’t incorporate that in the scheduling department.

“Every division has good lines. We also have bad lines. I don’t want to drive in the ghetto. Some people are OK with it. Their day goes faster when they have to hustle. You pick up different kinds of characters. For some operators it’s entertaining. For me it’s a little bit sad. Some operators have been assaulted. You don’t know what to expect from passengers. They might have had a bad day. They might be mentally unstable. They start breaking windows or harassing other passengers. I’ve seen fights on my bus.

“Once, this guy thought he could bully a little guy. He said, ‘Let’s take it outside.’ He was surprised that the little guy took a tennis racket out of his backpack and started to take some swings. The other guy’s demeanor changed, and everybody on the bus started laughing. The best I can do is pull over, open the doors, and ask everybody to get off the bus. There’s paperwork that you have to fill out at the end of the day. I don’t want to go home having a bad day like that.

“Metro has a protocol for everything. They were getting on our cases about not pushing the right buttons on our fare boxes. Armored cars come and take them from the yard. They count the money in the vault house and can compare with what we’ve tallied on the fare box. If passengers don’t pay, Metro has a ‘quote the fare once’ policy. I don’t say anything. Some operators have to get the last word, and they will fight tooth and nail to get the last nickel out of the passengers, so they put themselves at risk. It’s not worth it. Your life isn’t worth the $1.75.”