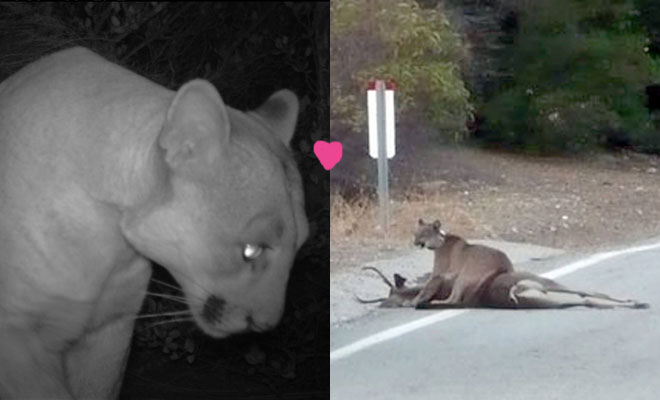 Like celebrity spotting and sunshine, living with wildlife is part of the L.A. lifestyle. (Just ask New Girl star Jake Johnson, who talks about being neighbors with a “full-on lion” in this L.A. Story.) So when this photograph of a mountain lion on top of a fallen deer, taken by a motorcyclist on an isolated stretch of Mulholland Highway near Malibu Springs, made the news last week, we saw in it something other than death and danger (although our thoughts and deepest sympathies are with the deer’s loved ones). We saw love. Big, fat, shiny, happy love—or at least the hope of it. You see, when we first learned of P-22, the lone male mountain lion now living in Griffith Park, last summer, we were less concerned with how he got there—likely by crossing the 101 and/or 405 Freeways unharmed—and more worried about his future, his social future. Sure, having your own 4,000 plus-acre park to roam around in sounded like fun, but who would P-22 share his mountain lion jokes with? Who would comfort him when the haunted hayride at the old zoo got a little too scary? And how would he mate? We are unabashed romantics, but that last one is a very serious question given the local lion population’s well-documented incest problem.

Well, maybe we’ve been working a little too hard on our October sex issue, but we think we’ve found The One for P-22. According to the National Park Service, the lion caught lunching on Mulholland is P-23, a young female who just recently separated from her mother. “It’s like she’s 18 now and left home,” NPS spokesperson Kate Kuykendall told CBS news. In addition to her youth, good looks, independent spirit, love of the great outdoors, and proven ability to bring home the bacon, P-23 does not appear to be related to P-22. So what’s keeping these would-be soul mates apart? The 405. Yes, the east/west L.A. divide has defeated many a romance before, but knowing what we do about these two, we think they can defy the odds. Go get her, lion! (But safely, please.)