Home Business After a Night of Looting, Melrose Business Owners Survey the Damage 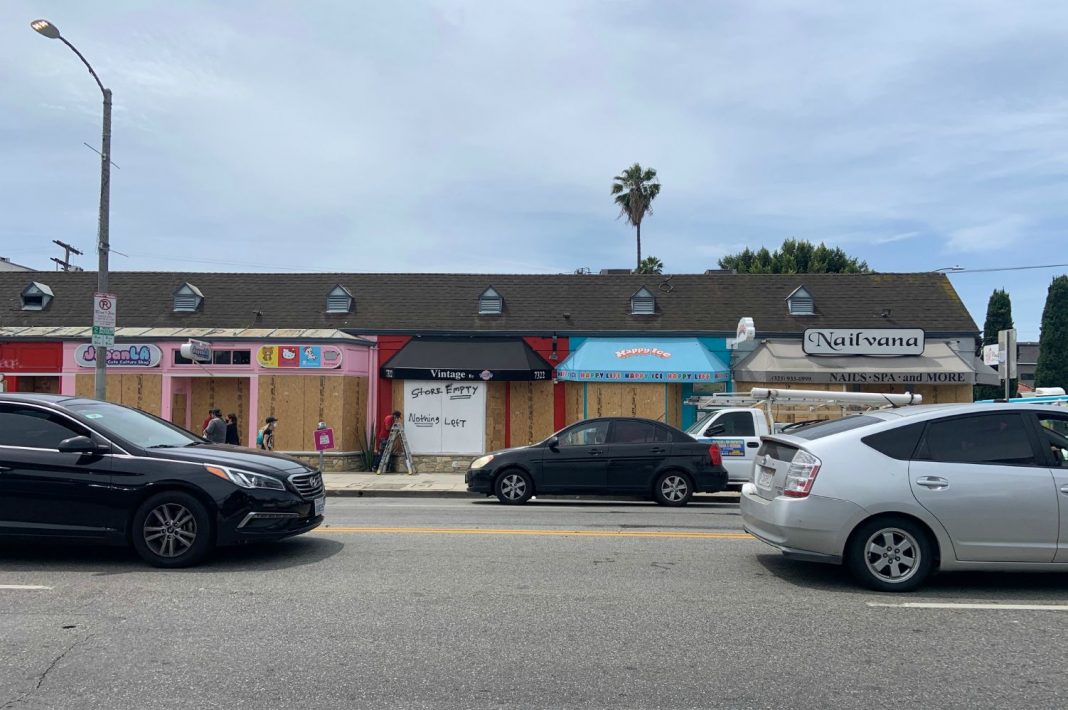 From periodic break-ins to the 1992 uprising to a prolonged shutdown resulting from a global pandemic, l.a.Eyeworks has weathered more than a few storms during its 40-plus years on Melrose Avenue. In advance of yesterday’s protests and the looting that followed, owner Gai Gherardi and her team prepared for the worst, moving the store’s inventory of glasses offsite. Alas, it didn’t keep looters from entering the store, but it did limit what they were able to make off with.

“All they took was a chair,” Gherardi explains over the whir of a drill as an employee puts up slabs of plywood. “No chaos was made in the store. It wasn’t violent or violated.”

Other businesses weren’t quite as lucky. Round Two, a vintage and resale store flanked by Buzzz R Us Smoke Shop and JapanLA, was completely cleaned out. A spray painted message on the boarded up front window informs would-be looters “store empty…nothing left.” Businesses from Fairfax to Larchmont Village were vandalized and cleared of what was inside.

By midmorning on Saturday, gawkers and helpers alike were out in force as cleanup efforts kicked off along Melrose, which was hard hit after last night’s protests against police violence gave way to vandalism and looting along the thoroughfare. The Los Angeles Times reports that looters were spotted ransacking the Adidas store at around 9:45 p.m. on Friday, but the area’s many mom-and-pop outposts weren’t spared, even ones that posted signs in support of the Black Lives Matter movement. A sign in the window of Stag Hair Parlor informs passersby that it’s minority owned; still its door was smashed and its inventory of hair products was taken from inside.

Volunteers carrying brooms and passing out supplies like bottled water were making their way up and down the street. A woman who identified herself as a Robertson Boulevard business owner stopped by storefronts offering croissants to people cleaning and boarding up. Amid the neighborly positivity, others betrayed an undercurrent of anger. One man, who was volunteering to sweep up glass outside affected businesses, asked not to be identified because “anything I say is not going to be good.” He and a companion had just cleaned up a nearby florist, padlocked the gate, and left a phone number so the owner could reach out for the combination.

Standing outside her boarded-up glasses store, Gherardi says she was genuinely moved by yesterday’s protest, which began peacefully as a Black Lives Matter rally in Pan-Pacific Park. “I was flooding with tears from the beauty of kids coming from every direction, it was incredible. And then it turned,” she says. “I really do not believe the intention at all…it’s just so unfortunate. I understand the agony, but this gets us nowhere.”

She says she feels for all her fellow small business owners who were impacted last night, but is confident they’ll rebound. “These stores here, these are family businesses for the most part and they’ve been hanging on by a thread through the coronavirus, and then this was a lot. It’s a gut punch,” she says. “But we’ve been through a lot and we’ll get through this. I know we will. There are some deep discussions to have and we have to stop with this ridiculous license to be racist that’s just unleashed something.”