Home News During Quarantine, These Three Brothers Hatched a Plan to Defeat Trump in... 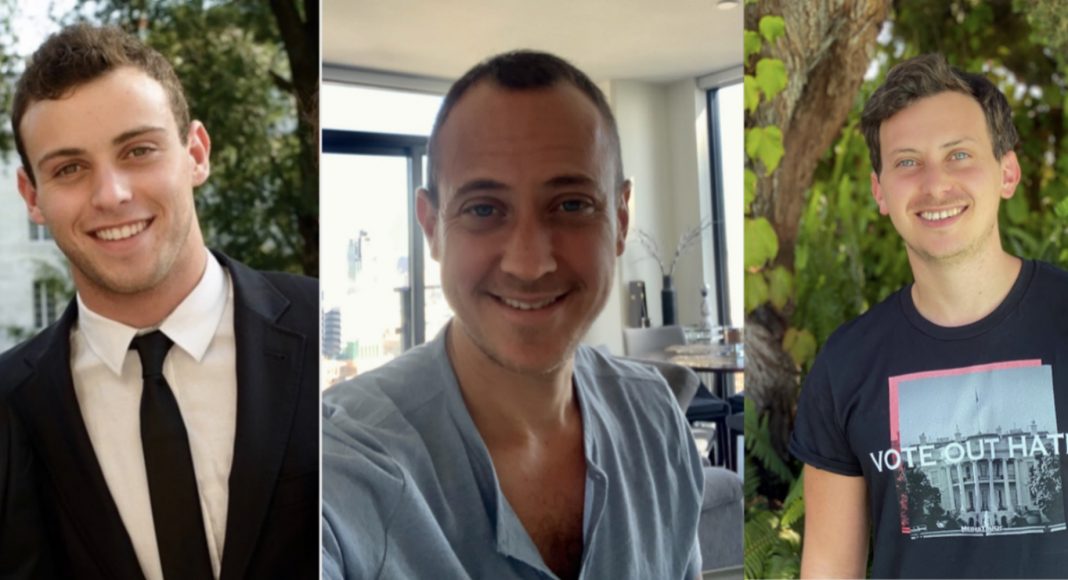 While some of us spent our free time during quarantine baking sourdough bread or going on nightly walks around the city, brothers Ben, Brett, and Jordan Meiselas decided to take up a slightly different hobby: creating biting viral video ads designed to help Democrats defeat Donald Trump in November. Together, they formed MeidasTouch, an independent political action group.

Each of the three brothers brought a skill to the table. Eldest brother Ben is an attorney who represents high-profile clients like Colin Kaepernick; middle brother Brett is an Emmy-winning Los Angeles-based video editor; and Jordan, the youngest, works in marketing for major brands. MeidasTouch found an audience nearly immediately, releasing anti-Trump videos that rack up millions of views online.

As election season ramps up to a fever pitch, MeidasTouch is entering a new phase, placing advertisements in front of viewers in swing states, hoping to encourage voters to turn out against the president. We caught up with Brett Meiselas of MeidasTouch to learn more.

How did the three of you come together from your own individual careers to create MeidasTouch? And how has it been working with your brothers?

MeidasTouch formed in the most organic way possible. The three of us were watching the impending coronavirus crisis as cases exploded throughout the world, watching with horror as Trump continued to downplay the severity of the pandemic on national TV day in and day out. From telling Americans the pandemic would “go away like a miracle” to asking if people should inject bleach and UV light, we began to feel helpless. Rather than continue to call and text each other to complain about the state of the country, we decided to take action.

The pandemic, and Trump’s malicious and incompetent handling of the pandemic, made us realize that this election would literally mean the difference of life and death for many Americans. We were called to action by this dark moment in American history, and we hope to do our small part to make the change our country so desperately needs.

We always wanted to work together in some capacity, but never knew what that would look like practically. When we thought about our backgrounds and the situation we were in, we knew the moment was right. MeidasTouch brought together Ben’s business savvy, my technical and creative skill set, and Jordy’s marketing brilliance to create an unstoppable force in progressive politics. Working together as brothers has been one of the most unexpectedly rewarding things we have done in our lives.

It seems like a lot of Americans are feeling inspired to take political action in these strange times. Have you observed that?

All around the country people are waking up. Politicians often use the line, “This is the most important election of our lifetime.” This time, that’s actually true. If Trump wins another term, the America as we know it may not exist anymore. Due to Trump’s malicious, weak, and incompetent “leadership,” millions of Americans are sick and out of work. There is chaos in our streets. Our military has been disrespected like never before. And amid the backdrop of this chaos and suffering, Trump’s plan is to make things worse. He’s trying to take away healthcare and social security in the middle of a pandemic, he refuses to condemn radical right violence and extremism, and he only seeks to fan the flames of hate and divide us. Trump represents one of the biggest crises in American history, so it is no surprise that people are engaged like never before to save our country.

What has been your strategy with MeidasTouch so far?

With MeidasTouch, we aim to produce the most impactful and most watched political videos out there. Donald Trump represents an existential threat to America as we know it. From being too weak and incompetent to institute an effective strategy to handle the pandemic, to sinking our economy into a near depression, to engaging in a full-on assault of the norms, values and freedoms we hold dear as Americans, it is imperative that we fire Donald Trump on November 3rd and elect Joe Biden the next President of the United States.

We are working to achieve this goal with three strategies:

First, it is essential that we motivate the Democratic base to be excited, engaged and become active participants in the democratic process. We not only want to motivate this group to vote, but we also want them to be inspired to use their talents to help bring real change to our country.

Second, we believe there is a large group of independents and disaffected Republicans who feel the party has abandoned them. From our first viral success of our video “Are You Better Off,” which uses Ronald Reagan’s famous debate line, “Are you better off than you were four years ago?,” to a recent release called “#ImVotingForJoe” (which trended number one in the United States on Twitter), we want to show voters that a vote for Joe Biden isn’t a vote for the Democratic Party, but a vote for America.

Third, our content works to counter Trump campaign narratives in near real-time. In 2016, Trump was effective in labeling his opponents and having those names stick. This election cycle, Trump is struggling to find a coherent message. Examples of videos that fall into this bucket include “#CreepyTrump,” “#TrumpTerrorism” and “#QuidProTrump.”

What can you tell us about your newest campaign, airing television ads in battleground states?

In Pennsylvania, we plan to run an ad called “Trump Has No Healthcare Plan.” On the campaign trail, Trump promised that he would deliver his voters a new healthcare plan on his first day in office. Then as president, he promised them it was coming again, and again and again. In his infamous July interview with Chris Wallace, Trump promised a healthcare plan was coming within two weeks. Now nearly two months later, Trump’s healthcare plan remains nonexistent. The truth? Trump has no healthcare plan. Never has. Never will. His only plan is seemingly to take away healthcare from those who need it most. As we speak right now, the Trump administration is arguing to remove protections for Americans with preexisting conditions in the Supreme Court, and has consistently advocated to defund important social programs including social security and medicare.

In Iowa, we plan to run an ad targeting Senator Joni Ernst, who has failed Iowans in every capacity. Senator Ernst’s blind loyalty to Trump has led Iowa into catastrophe. As if supporting trade deals that hurt Iowa’s farmers and a nearly nonexistent COVID-19 policy that made Iowa the nation’s coronavirus epicenter wasn’t enough, Sen. Ernst took her obsequiousness to the radical right to another level, seemingly endorsing a QAnon theory that the number of coronavirus cases and deaths is a hoax. Iowans cannot afford to have a coronavirus denier making policy.

Most of your videos are aimed at criticizing Trump, but you also have some that are positive ads in support of Biden-Harris. Which do you think resonate more strongly with the audience?

In our minds, it’s important to produce a mix of ads that both highlight Trump’s rampant corruption and also showcase why Americans should vote for Joe Biden and Kamala Harris. Traditionally, our anti-Trump content tends to hit the hardest. Every day there is so much corruption and chaos that it is hard to keep track of the news cycle. Our videos help spotlight the most important stories and deliver them to a mass audience. In recent weeks, the enthusiasm for Biden-Harris has skyrocketed, and our Biden-Harris content has seen a huge surge in engagement. Notable recent examples include “#ImVotingForJoe” and “#WeWantJoe,” two videos that scored millions of views and number one trends.

After the election, where do you see the project going? Will you continue?

We are hyper focused on our goal of electing Joe Biden to be the next President of the United States. There is nothing more important to us between now and the election than making this happen. After the election, we can begin to dig further into next steps. That being said, we hope that MeidasTouch will be around as a progressive powerhouse for years to come. We’re just getting started.