Home Sports Dieter Ruehle is the Most Heard, Least Famous DJ in All of... 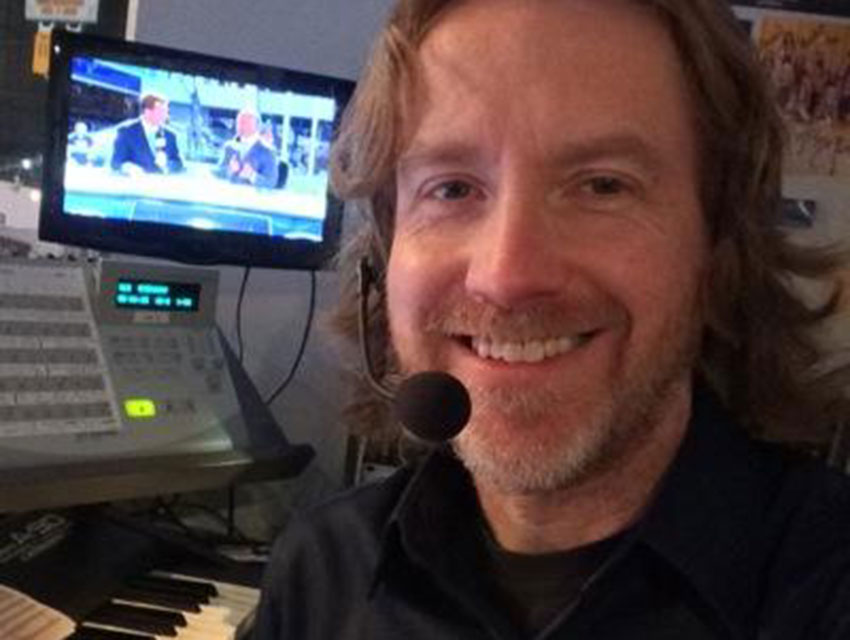 The fact that the Staples Center music director performs regularly for nearly 20,000 people a few times a week makes Ruehle the city’s most popular organist and arguably its most-heard deejay. It’s a job he says he’s wanted since he was a sports-loving, classical-piano-lesson-taking kid growing up in the Valley. “I’m not in a band,” he says. “My aspiration was to play sporting events. Every day it feels great. I treat every game as though it’s a brand new experience.” Here are five other Ruehle facts to keep score of:

1. He works eight-hour days
Just because a Lakers game is 48 minutes long doesn’t mean Ruehle has the shortest shift in Los Angeles. In fact, for a 7:30 tip-off he arrives to work at approximately 3 p.m. to go over production notes, create playlists, warm up, and get focused. He begins deejaying at 6 p.m. and doesn’t leave the arena until an hour or so after the game ends.

3. He can play 500 songs
When Sylvester Stallone was spotted sitting courtside at a recent game, Ruehle kicked into the theme song from “Rocky” just as Stallone’s face came onto Staples Center’s big screens, which is to say quicker than you can say “Yo, Adrian.” The tune is just one of the approximately 500 songs Ruehle plays throughout a season. He never repeats material in the same game.

4. He performs live—even for chants
Those drums you hear during the “de-fense” chant aren’t pre-recorded. Ruehle plays a Boss Dr. Rhythm DR-660 drum machine, which he prefers because doing so means fans won’t hear the exact same thing every time.

5. He’s still a fan
Ruehle pays attention to the games, and not just for work purposes. Take Robert Horry’s buzzer-beating shot against the Sacramento Kings in 2002. “At moments like that I’m a fan just like everybody else,” says Ruehle. “I remember when he hit that shot. I was jumping up and down with the scoreboard operator. There were fans up here and we were all high-fiving.” Game Seven of the 2010 NBA Finals against the hated Boston Celtics stands out too. “There was noticeable tension in the air,” he says. “I was nervous and I’m sure the players were nervous. The energy that was in the building is really hard to describe. I could tell a difference. It was like a Hollywood script.”