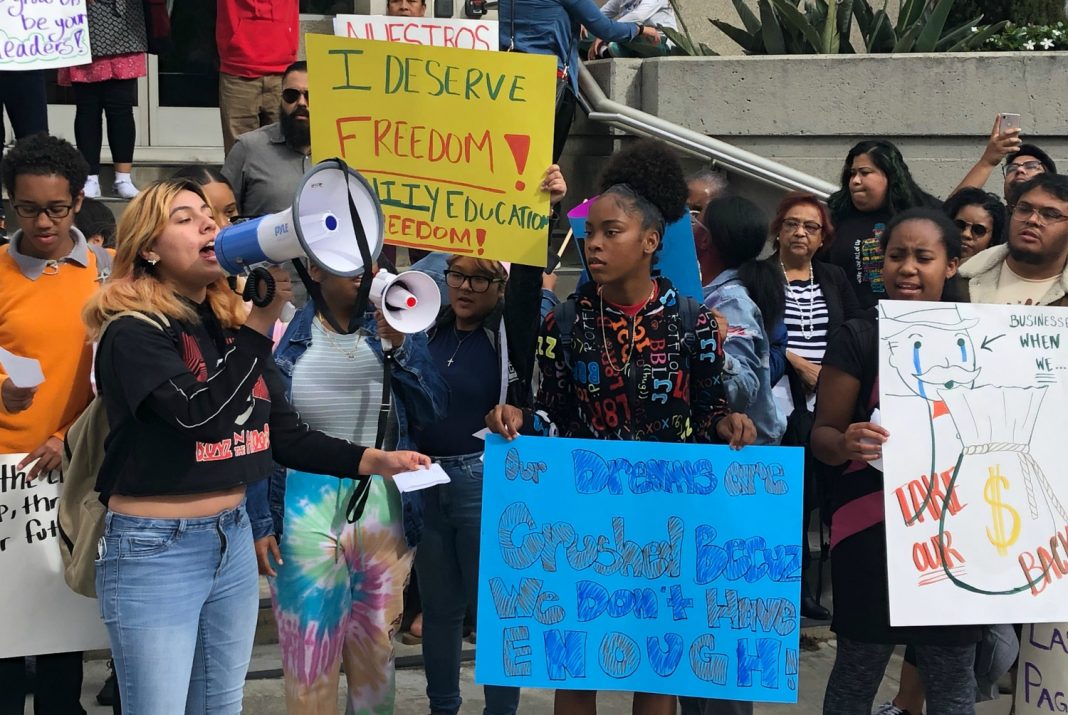 When the teachers strike wrapped up in January of this year, Los Angeles city officials made an agreement with the teachers’ union, promising, among other things, salary bumps, smaller class sizes, and a host of new hires, including more nurses, librarians, counselors, and support staff. Now, in a cash-strapped district that currently spends around $13,230 annually per student (compared to New York’s $24,000 and Boston’s $22,000), the city is looking for ways to pay for those services.

On Tuesday, students, parents, and organizers from a number of South L.A. schools and community organizations gathered in front of the Los Angeles Area Chamber of Commerce in support of Measure EE, a proposed parcel tax on the June special election ballot that could help bolster budgets. Officials say the bill’s revenue, which would total about $500 million a year, would be spent in large part on fulfilling the district’s contract with United Teachers Los Angeles, and it’s garnered support from leaders like LAUSD superintendent Austin Beutner, UTLA president Alex Caputo-Pearl, and Mayor Eric Garcetti.

However, several business organizations, including the Chamber of Commerce, aren’t so keen on the measure. They argue that the 16-cent-per-square-foot tax would place an unfair burden on commercial property owners and landlords. “The per-square-foot scenario…adopted by the LAUSD Board is inconsistent with our principles on singling out the business community and commercial enterprises,” said Chamber CEO Maria S. Salinas in a statement.

Despite the fact that LAUSD created an independent oversight committee in April, opponents have also raised concerns that the language in the measure is too loose, which might allow officials to misappropriate the funds. A small change to the measure (which removed the word “habitable” from “habitable space”) has even resulted in a lawsuit.

Measure EE proponents are urging them to reconsider their position. At Tuesday’s rally, supporters of all ages played drums, waved signs, and gave impassioned speeches in English and Spanish about why the funding is needed. 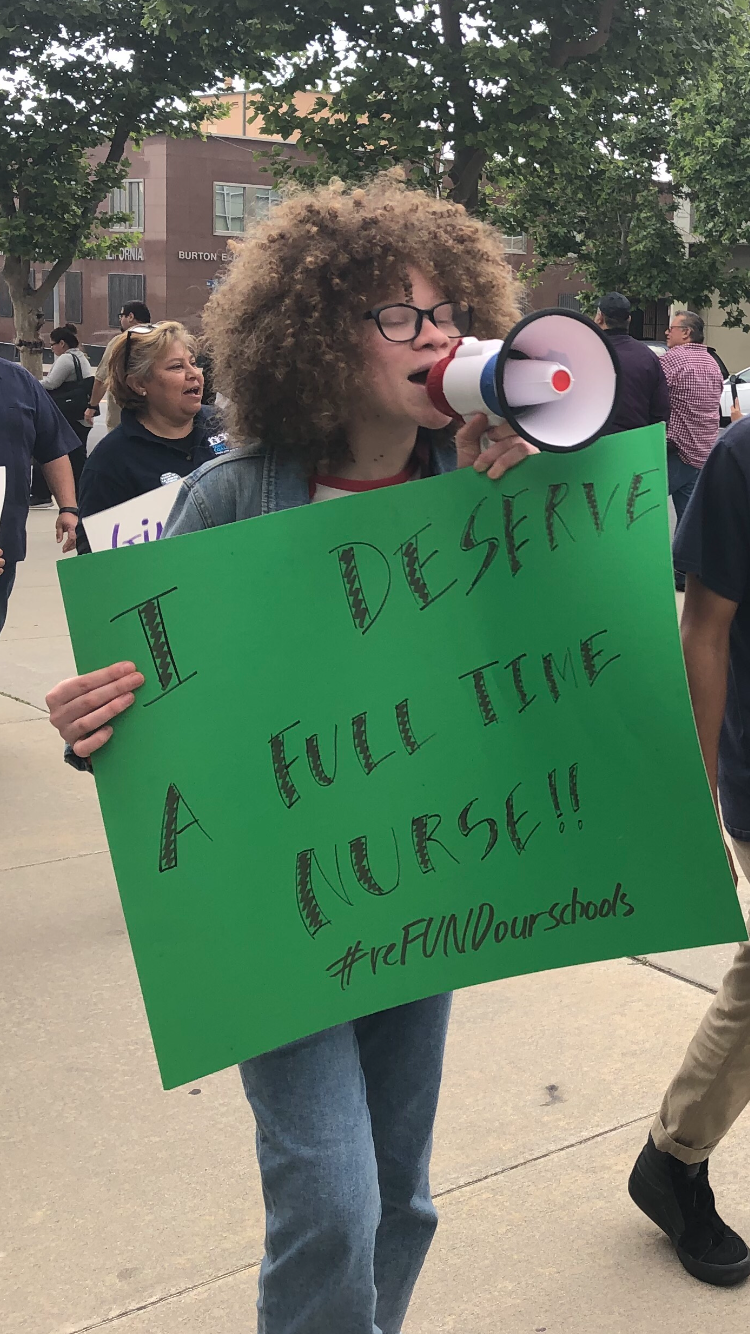 Brooklynn Haylock, a tenth grader from Crenshaw High who has been organizing with the Community Coalition’s South Central Youth Empowered throughAction program, listed her grievances to raucous applause. “We have a nurse that’s only there two days a week…we have classes with up to 42 students. We have textbooks with the pages falling out. Does that sound like equity?” she said into a megaphone. “We not only deserve better, but we demand better.”

UTLA’s Caputo-Pearl also made an appearance, questioning the Chamber’s stated commitment to education. “They’re out here defending the richest corporations at a time of record profits, when we should be out here defending our students and our schools. Is that right?” he asked, to a resounding “Yes!”

In an interview, Hector Sanchez, director of finance at the Community Coalition and father of two, echoed Caputo-Pearl’s concerns about the Chamber’s priorities. “For the Chamber of Commerce, it’s been OK to invest millions of dollars to defeat this initiative, as opposed to just using that money to help the schools,” he said. “It just doesn’t make any sense.”

Eight-year-old Gustavo Rangel, one of the rally’s smallest attendees, helped out by leading chants and playing drums. He paused for a moment to sum up the protestors’ demands. “We’re protesting because we’re fighting for our teachers,” he said. “We need school supplies, and more money for our teachers and principles. Thank you.”

RELATED: Not All L.A. Teachers Are Thrilled About Their Post-Strike Contract

Measure EE, the School-Funding Parcel Tax, Goes Down in Flames

Not All L.A. Teachers Are Thrilled About Their Post-Strike Contract