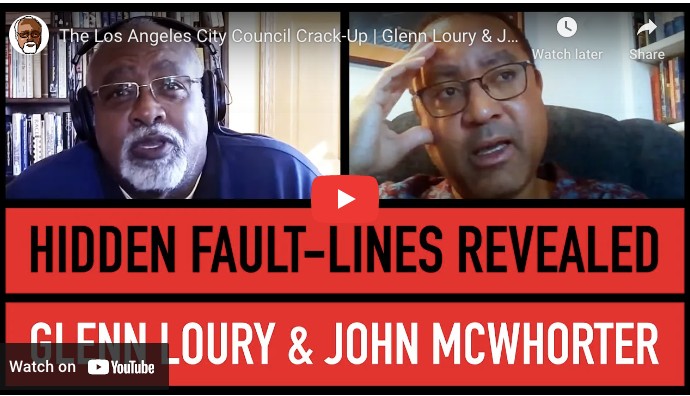 The racist comments spouted by former Los Angeles City Council President Nury Martinez and perhaps soon-to-be former Councilman Kevin de Leon regarding Councilman Mike Bonin’s young Black son as well as District Attorney George Gascon (“Fuck him! He’s with the Blacks!”) have so far resulted in Martinez resigning from the council as well as labor leader Ron Herrera quitting his position for partaking in the discussion, while de Leon desperately clings to his job.

And though what was said—namely that Bonin’s son was like a “monkey,” and a prop, and that he was not well-behaved, especially by the standards of Black and Latino parents—was grotesque, John McWhorter, the best-selling author, columnist, and linguistics professor at Columbia, and Glenn Loury, the Brown University professor of economics and conservative hero, took a different look at the scandal this week.

On the latest installment Loury’s weekly Youtube podcast The Glenn Show, where McWhorter is a twice-monthly guest, “Social Capital”-coiner Loury introduced the L.A. City Council dust-up by saying, “I mean, that’s more than just calling out the N-word at a basketball game. And, excuse me, I just want to add, everybody involved is quote, ‘a person of color,’ close quote. So it seems to reveal something about the intra-minority group political dynamic, as it’s a power-competition playing out in Los Angeles area politics.”

That sounds a little more intricate than some Los Angeles pols and pollsters would have one believe. But McWhorter—who is considered a right-of-center thinker, but insists he is a classic liberal, especially by the standards of recently previous decades—argued, “I will openly admit that I actually say it in my book Losing the Race [2000] way back, I say it’s very rare to see a black kid running up and down the aisles in a plane. And, it is. I’m not—I’m sure it’s happened, but I would say that there is a tendency in terms of that upbringing style. And I’ll be very open to someone telling me I’m a racist for thinking so—but that’s ordinary.”

However, McWhorter further admitted, even allowing for how terribly people may speak when they don’t know anyone is listening, “Calling a Black kid a changuito, a ‘little black monkey,’ that is, that is tough.”

But let’s not pretend this is a surprise, he added. “I’m sure that that’s said among a great many Latino people at many levels of life when nobody is looking because there’s a difference between neutral life and what’s considered humor, what’s considered group membership. You know, these sorts of standup routine sorts of things.”

Mike Bonin, however, even managed to wreck this opportunity, according to McWhorter.

“And then, it’s funny just where we’ve come,” he noted. “The Black kid in question is the adopted child of a white man they’re talking about, and the white man talks about how upset he is that they signaled out the child, who is just exhibiting ‘Black kid energy,’ ‘Black child energy.’ Well, what’s, ‘Black child energy’? This is coming from someone who’s supposed to be the hero. So Black people have energy? Then what does the white kid have? Intelligence?”

Stay on top of the latest in L.A. food and culture. Sign up for our newsletters today