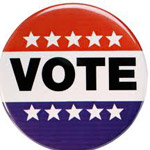 With exactly one month to go before Angelenos elect the next mayor of Los Angeles, Eric Garcetti is pulling away in what’s essentially been a neck-and-neck race with rival candidate Wendy Greuel. (Garcetti received 32% of the vote in the May 5 primary, while Greuel received 29%.) A new USC Sol Price School of Public Policy/Los Angeles Times poll released Sunday reveals a ten-point lead for Garcetti, who is favored by women, whites, and Latinos. Greuel, however, is favored among black voters and maintains a slight edge in the Valley. The poll was conducted April 15-17 and has a margin of error of 4.4%.

But the race isn’t over yet. Greuel unveiled a “policy blueprint” outlining her vision for the city with emphasis on job creation (including investing public and private sector money in local “up-and-coming” tech companies), business development (she says she’ll phase out the city’s business tax), and education reform on Friday, and held a town hall meeting in Westlake with her most famous supporter, Bill Clinton, over the weekend. Following the release of the USC Sol Price School/LAT poll, she emailed supporters to tell them “we’re going to win.”

Garcetti, meanwhile, was scheduled to campaign with primary opponent Kevin James in Sunland on Saturday and joined supporters at Ciclavia in Venice on Sunday.

The runoff election will be held May 21.