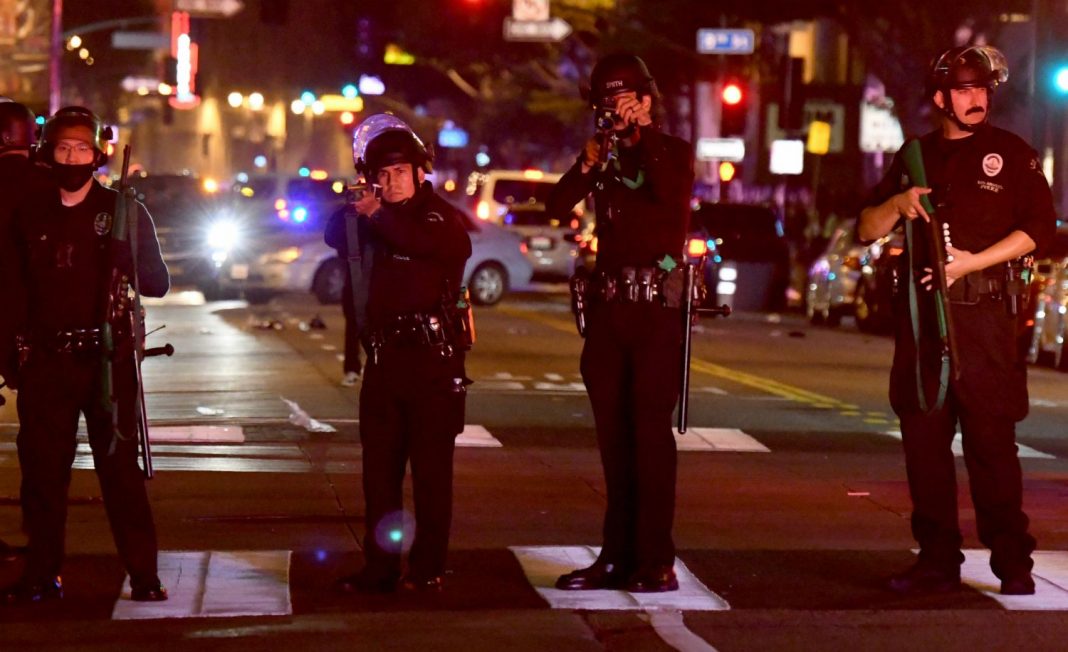 UPDATE 6/4/20: On Thursday, Sheriff Villanueva announced that there will be no curfew issued for tonight, and that perhaps curfews related to the current outburst of protests have concluded entirely.

“Based upon current situational awareness and the recent pattern of peaceful actions by protesters, the Los Angeles County Sheriff’s Department will no longer enforce a curfew,” his statement reads.

Not mentioned in his statement is that on Wednesday evening, the ACLU Foundation of Southern California filed an emergency lawsuit declaring the curfews in Los Angeles and San Bernardino counties to be violations of the First Amendment. The suits were filed on behalf of Black Lives Matter, journalists, protesters, and others who found the curfew inappropriately limited their speech.

County Supervisor Janice Hahn stated on Wednesday night that she believed  the curfews had evolved from an emergency tactic to put a lid on pockets of vandalism and looting into a cudgel being wielded to suppress demonstrations, telling the Los Angeles Times that, “it seems like they are being used to arrest peaceful protesters. I don’t think they are needed anymore.”

Cities within the county are still allowed to impose curfews if they feel it necessary.

UPDATE 6/3/20: Los Angeles County will again be under countywide curfew beginning at 9 p.m. The curfew will last through 5 a.m. on June 4. This fourth night of widespread curfews follows Tuesday’s massive protests, during with virtually no incidents of violence or property damage were reported, and when the majority of arrests made were for curfew violations.

In Beverly Hills the city curfew will go into effect at 1 p.m. in the business district and 4 p.m. elsewhere. In Culver City, city curfew starts at 6 p.m.

“The curfew will continue on a daily basis until the organized protests are gone,” Sheriff Alex Villanueva told KTLA.

That acknowledgement that the curfews are being used to suppress not just potential looting but also non-violent protests raised the ire of the ACLU. “The Order in its present form is neither authorized by state statutory law nor consistent with the United States Constitution,” an open letter from the civil liberties group to the L.A. County Board of Supervisors reads.

@ACLU_SoCal has sent letters to County and City of LA seeking rescission of the curfew orders. Now more than ever we need protest to highlight police violence and race discrimination. These blanket curfews are unconstitutional. @OHectorV @DocMellyMel @PeterBibring @andreskwon pic.twitter.com/Li5FsoRQiW

In addition to the standard exceptions for essential workers and emergency medical care, today’s order also makes an exception for individuals going to cast in-person votes in the local special elections happening today in the City of Commerce and El Rancho Unified School District.

UPDATE 6/1/20: For a third night, L.A. County will be enforcing a 6 p.m.-6 a.m. curfew throughout all incorporated and unincorporated areas, including the City of Los Angeles. The order instructs people to stay off “public streets, avenues, boulevards, places, walkways, alleys, parks or any public areas or unimproved private realty” starting and ending at the designated times. The order does not apply to police officers, firefighters, and the National Guard, as well as credentialed media, people traveling to and from work, people who need medical help, and “people experiencing homelessness and without access to a viable shelter.”

Earlier today, an alert went out claiming that the curfew had been moved up to 5 p.m., but that appears to have been in error. At 4 p.m., Mayor Eric Garcetti reiterated the 6 p.m. curfew for the city of L.A.; likewise, L.A. County’s website still says 6 p.m.

In a statement, Garcetti said, “The focus needs to stay on taking down systemic racism and ending senseless violence against Black men and women—and we can’t let a small number of people hijack that movement by putting lives in danger and destroying property,” Garcetti said in a statement. “We are keeping the curfew in place tonight to protect everyone’s safety and help our first responders keep the peace.”

More stringent curfews in municipalities supersede the County order. For instance, Santa Monica is enforcing a 1 p.m. curfew in the “downtown business area” and a 4 p.m. curfew in the rest of the city. Same goes for Beverly Hills and Long Beach (1 p.m. in business districts, 4 p.m. citywide).

UPDATE 5/31/20: As protesters continue to demonstrate against police violence across the city, L.A. County has implemented a curfew beginning at 6 p.m. on Sunday and ending at 6 a.m. on Monday morning. Earlier today, Mayor Eric Garcetti announced that a citywide curfew would be in place beginning at 8 p.m., but Sheriff Alex Villanueva’s curfew supersedes the Mayor’s order.

Throughout Los Angeles, people received conflicting emergency alerts on their phones, prompting confusion and suspicion that the conflict was meant to confuse people. Mayor Garcetti has not deleted or updated a tweet from earlier today that says curfew begins at 8 p.m. on Sunday.

“All incorporated and unincorporated areas of Los Angeles County shall adhere to staying off public streets, avenues, boulevards, places, walkways, alleys, parks or any public areas or unimproved private realty within Los Angeles County, between the hours of 6 p.m. and 6 a.m. the following day,” the county’s website says. The order does not apply to police officers, firefighters, and the National Guard, as well as people traveling to and from work, people who need medical help, and “people experiencing homelessness and without access to a viable shelter.”

A protest that began around noon in Pan-Pacific Park has since migrated to the area of 3rd and Fairfax, where the LAPD has declared an unlawful assembly. At least one police vehicle was set on fire and several others were vandalized as police bombarded the area, reportedly deploying tear gas and flash bangs.

As some of the crowd dispersed, a group of protesters, both on foot and in cars, made its way through the city, heading east on Beverly Boulevard. At approximately 3:30 p.m., moments after a parade of police cars and motorcycles headed west through the area, the protesters made their way through Larchmont Village, where neighbors stopped and chanted in support.

It’s the fourth day of nationwide protests against racism and police violence in the wake of the death of George Floyd, who died while being detained by Minneapolis police on May 25. Derek Chauvin, the officer who was filmed kneeling on Floyd’s neck for a prolonged period of time, has since been arrested and charged with murder.

After a night of protests in downtown L.A. that resulted in upward of 500 arrests, Mayor Eric Garcetti has implemented a curfew beginning at 8 p.m. Saturday night, continuing through 5:30 a.m. Sunday. Initially, the curfew only impacted downtown, but it’s now citywide.

RELATED: The LAPD Arrested 500 Protesters in DTLA on Friday Night